Plants grow on the moon

The first plants germinate on the moon

A small leaf for the moon, a big step for China's space travel: For the first time, plants have sprouted and grown on the moon - on board the Chang'e 4 lunar lander . Also on board are the seeds of thale cress, potatoes and rape, as well as fruit flies and yeast.

In the coming decades, astronauts should return to the moon and set up a lunar base there - according to the plan of space agencies, but also private companies. Lunar lava caves could be suitable locations for such a lunar station because there may be water ice there and protect the caves from cosmic rays. A prerequisite for a lunar colony, however, is that the astronauts can take care of themselves as much as possible - for example, with plants they have grown themselves.

China's space agency has now taken a first step in this direction with its Chang’e 4 space probe. The probe landed on the back of the moon on January 3, 2019 and a little later had released a small rover, the "jade hare" Yutu, onto the surface of the moon. Since then, Chang’e 4 has provided the first panoramic images of the landscape on the far side of the moon and is supposed to use her instruments to explore the conditions there. 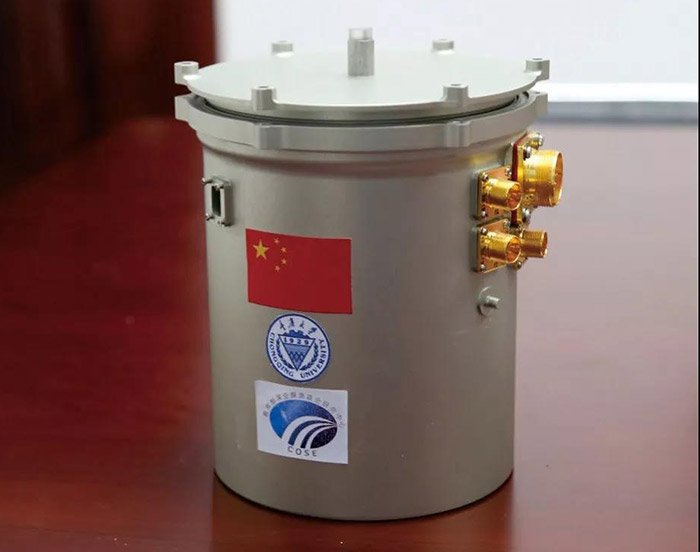 Such a cylinder serves as a mini biosphere for the lunar plants. © Chongqing University

On board the probe is a special payload: a metal cylinder around 18 centimeters high that serves as a mini greenhouse. Inside the experiment developed by Chongqing University are seeds of cotton, potatoes, rapeseed and thale cress, which are supplied with a supply of air, water and nutrients. Also includes fruit flies and yeast.

Mini ecosystem in the lunar container

“The first criterion for choosing these 'passengers' was their small size,” explain the researchers from Chongqing University. "Second, the plants and animals had to be able to withstand large temperature differences and be resistant to radiation and other disturbances."

The aim was to establish an ecological cycle on a minimal scale among the “moon passengers”. "The plants generate oxygen and food for other organisms that consume it," says a description of the experiment by Chongqing University. “The fruit flies as consumers and yeast as decomposers in turn generate carbon dioxide for the photosynthesis of the plants. The yeast can also serve as food for the fruit flies. This cycle creates a mini-biosphere made up of producers, consumers and decomposers. "

First cotton seedlings on the moon

And indeed: the first photos from inside the mini-biosphere now show that the cotton seeds have already sprouted, but the remaining plant species have not yet. The tiny cotton seedlings are the first plants to grow on the earth's satellite. "This is the first time that humans are performing biological growth experiments on the lunar surface," said project leader Xie Gengxin on Tuesday.

The first plants on the moon. © SciNews

But other space agencies are already experimenting with methods to grow plants on the moon and Mars. The astronauts of the International Space Station grow lettuce, tomatoes grow in simulated Martian and lunar soil, and in the Antarctic researchers are testing methods for growing plants for future lunar and Mars stations in a greenhouse container.