Where do you study table or couch

At the University of Jena there is psychological advice from students for fellow students. What at first sounds like a semi-professional presumption turns out to be an effective aid thanks to clever rules.

In a cafeteria of the Friedrich Schiller University in Jena, a green mailbox with the inscription "Whisper box" hangs on a pillar. You deliberately walk past it, after all, you have lectures, seminars and lunch appointments. Fortunately, you will notice the mailbox if you stumble, in your studies or in life. The green splash of color on the barren pillar includes the much greener CampusCouch homepage - an initiative of ten psychology students from Jena. I met two members of the CampusCouch, Christina Kellermann and Dörte Leonie Keller, for a chat in the winter garden of the Institute for Psychology.

On a relatively cloudy Saturday afternoon, I encounter the sterile, non-atmosphere that is almost dutifully attached to university buildings. To call the charisma of the white space clinical would be too dramatic, but only by a hair. If someone has ever taken heart and decorated the room with pictures and posters, the only thing left is the transparent adhesive strips on the wall and a few spider webs. Fortunately, the completely unrealistic, of course, but secretly feared nightmare image of the serene psychologist from television, who normally lives in such rooms, did not await me. Instead there is a friendly greeting and the usual "And what are you studying?"

Dörte and Christina agree that the CampusCouch is an opportunity for both of them to enrich their predominantly theoretical psychology studies with some practical experience. Methods that could be penetrated on a theoretical basis within the course, but which could at most be tested in artificial situations on other psychology students, actually turned out to be useful tools with which one can help, adds Christina. That seems to please both of them the most.

The CampusCouch initiative has existed in Jena since 2010. The founding members, who have since moved on, have exported an offshoot to Trier with the name “CampusOhr” and one to Magdeburg called “Hammock”. Behind all of them is the same claim: by students for students, an opportunity should be created to get rid of your frustration. Of course you have friends who are at your side with words and deeds and angry tirades on your infantile ex-boyfriend, but sometimes a neutral ear is necessary to force the chaotic emotional balance back into order. Above all, the offer should be low-threshold and accessible to everyone. Students from all subjects come to CampusCouch, even the gender ratio is balanced, says Dörte. Only at the end of the course, when the graduation is due and with it the decision of how to continue, do the listeners experience a small spike.

Contact with the CampusCouch begins with a letter in the whisper box or an email, quite informally. Even here you can put on paper what drives you. Whether or not there is an answer depends on the letter writer's wishes. Sometimes that's enough, otherwise a private meeting will be arranged by email. The CampusCouch does not have anything like a headquarters; instead, people meet in any café in downtown Jena or go for a walk in the park. One hour is scheduled for a conversation. The actual duration, however, is determined by the so-called speaker, a neutral term that sounds more meaningful than “patient” in a one-off conversation between students.

The strength of student help

At the beginning of the conversation, the fronts must be clarified. The CampusCouch does not claim to present tailor-made wisdom to the speaker. The members are much more likely to see themselves as methodically trained listeners. In addition, there will be a single conversation between listener and speaker. On the one hand, this is mostly sufficient, on the other hand, it should prevent a relationship from developing over several conversations that has the characteristics of a therapist-patient relationship. So if another conversation is necessary, you can do this with another member of the CampusCouch. 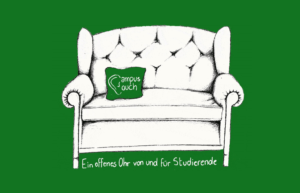 Despite being a student of their own, Christina and Dörte are aware of the responsibility that such an initiative entails. Conversations are only held if the listener feels that they are up to them individually. Individual interviews can only be held after a trial period of one semester. Before that, you are only present as a silent listener in the conversations of others. If deeper-lying reasons for the speaker's discomfort emerge, he is advised to seek therapeutic help. That happens before, but the worst-case scenario, such as a suicidal speaker, has not yet been experienced, says Dörte, and it is becoming a little more serious. In an extreme emergency, however, there is also a plan for this.

Such preliminary considerations remain hidden from the speaker, of course. It is only up to him to describe what exactly robs him of sleep. Often the disruptive factors are the usual suspects: the stress of the exam is oppressive; Friends or family quarrel; it's lonely, so completely alone in a strange city; Graduation is approaching, what am I doing with my life? The CampusCouch can show its greatest strengths precisely when it comes to questions like these. The semi-professional listeners live in the living environment of the student speakers, and empathy lives not least from the knowledge that the other person is basically not that different from one's own self.

The expert in yourself

A conversation with the listeners of the CampusCouch differs from a chat with friends regardless of their sense of responsibility: A single communication partner determines the topic, the duration, the course and the emotional content of the conversation. The speaker's descriptions are not clogged with their own experiences, advice or opinions. The aim is to keep this, and thus also yourself, largely out of the conversation. Empathy, the most important tool in listening, is not used for a possible, tailor-made solution strategy. Instead, it is assumed that each person is an expert on himself. The solution lies in the speaker himself, where the problem originates.

Logically, anyone who rattled through the last test with waving flags knows what to do to remedy this grievance. But this realization does not yet free you from the fear of failure. Instead of telling the speaker in a sacred tone how learning with index cards works, it is precisely this fear that should be felt and revealed. Emotions must be filtered out of the story by the CampusCouch audience and explicitly named in the form of a hypothesis. Fear should be allowed to take its place in the conversation that it already has, instead of falling under the table in favor of a pragmatic problem-solving strategy.

The speakers usually find the situation to take some getting used to, after all you meet a complete stranger with whom you have to chat up close and personal. Such uncertainties are usually overcome quickly, says Dörte, sounding as if it were a matter of course. Once you have opened your heart, you have sorted out what needs to be sorted, the listeners still give the opportunity to classify the conversation, give feedback and explicitly name new thoughts again. Whether the audience is allowed to recognize the speaker at a chance meeting in the train or not can be determined briefly, then you separate and go your own way.

On the campus couch

At the University of Jena there is psychological advice from students for fellow students. What at first sounds like a semi-professional presumption turns out to be an effective aid thanks to clever rules.