Why is the moon moving so fast

The way of the moon across the starry sky

The moon makes two different movements in the sky. On the one hand, it moves with the stars (at night) or the sun (during the day) from east to west over the course of a few hours. This movement comes about through the rotation of the earth around itself. It is not the moon that passes over our heads, but the earth turns under it. On the other hand, the moon moves around the earth. More on this below. 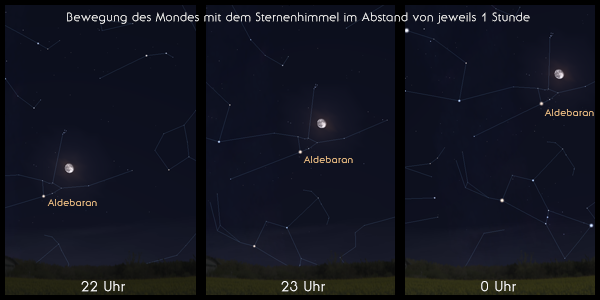 We can only see the moon when our position turns towards it. Then the moon rises for us, it rises over the horizon. While it is visible, it moves to the right, rising higher and higher. At some point it sinks again and disappears behind the horizon.

In the picture you can see: the moon rises in the east and rises together with the surrounding stars of the constellation Taurus with the conspicuous main star Aldebaran. The moon and stars move together to the right towards the south and up towards the zenith. This movement of the sky is caused by the rotation of the earth.

The wandering of the moon through the zodiac

The moon moves on its own because it orbits the earth. It takes him 29.5 days to go around it completely. We observers on earth see the moon against the background of the starry sky. 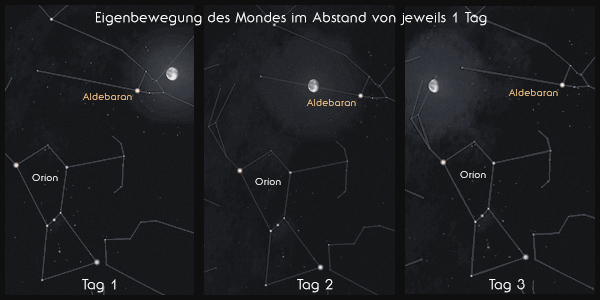 The moon moves in the area of ​​the ecliptic and moves through the constellations known as the zodiac signs. It actually does that quite quickly, because it changes the constellation about every two days.

His path leads him from west to east, so he moves against the usual direction. This can be seen if you look on two consecutive nights where the moon stands in comparison to prominent stars or constellations. Then you can clearly see that the moon has shifted its whereabouts quite a bit within this one day.

If you observe closely, you will notice your movement even in a single day. Within an hour the moon moves to the left in front of the starry sky by a distance that corresponds to its own diameter. One day later it even changed its position by 13 °, which corresponds to about 26 full moon diameters!

The moon performs its own movement 'backwards' from right to left along the ecliptic. The lunar orbit (yellow) deviates by approx. 5 ° from the ecliptic (blue) and crosses it in two places. At these nodes there can be an eclipse on a full moon or a new moon.

About every two days the moon enters a new constellation. On his way along the ecliptic he also passes every single planet once per round, which also move in the area of ​​the ecliptic.

The full moon in summer and winter

Summer nights are short, it's only really dark for three or four hours, then dusk sets in again. When the moon is full, the moon is exactly opposite the sun (phase 5 from part 2 of the moon observation).

When the sun sets in the northwest, the full moon rises in the southeast. If the sun appears above the horizon in the northeast in the morning, the moon disappears opposite in the southwest.

The time in which it can be seen is correspondingly short. Of course, he cannot rise very high there. Its path across the sky is flat. The summer full moon seems to creep along just above the horizon all night, always on the verge of going down again.

In winter the duration of sunshine is very short and it is dark for up to 16 hours. How good that we have the moon, because at least now and then it lights up the long night.

A winter full moon night can be quite bright, especially when the moonlight hits snowy surfaces and these reflect the light. In winter the full moon is particularly high in the sky and can let its luminosity work accordingly. And since it appears when the sun goes down and, conversely, also goes down when the sun comes out, it stays with us throughout the long winter night.

The winter full moon rises far in the northeast, rises high, draws in a large arc across the sky and only sets again in the northwest.

A first look at the surface of the moon

So far, it has been about observing the phases of the moon, i.e. the changes that the moon undergoes in the course of a cycle (part 2 of moon observation). We have also seen here how the moon moves across the sky and how it changes its position in relation to the starry sky.

All of this can of course be followed well, because the moon is so close to us (distance approx. 380,000 kilometers) that it hangs in the sky as a large ball. 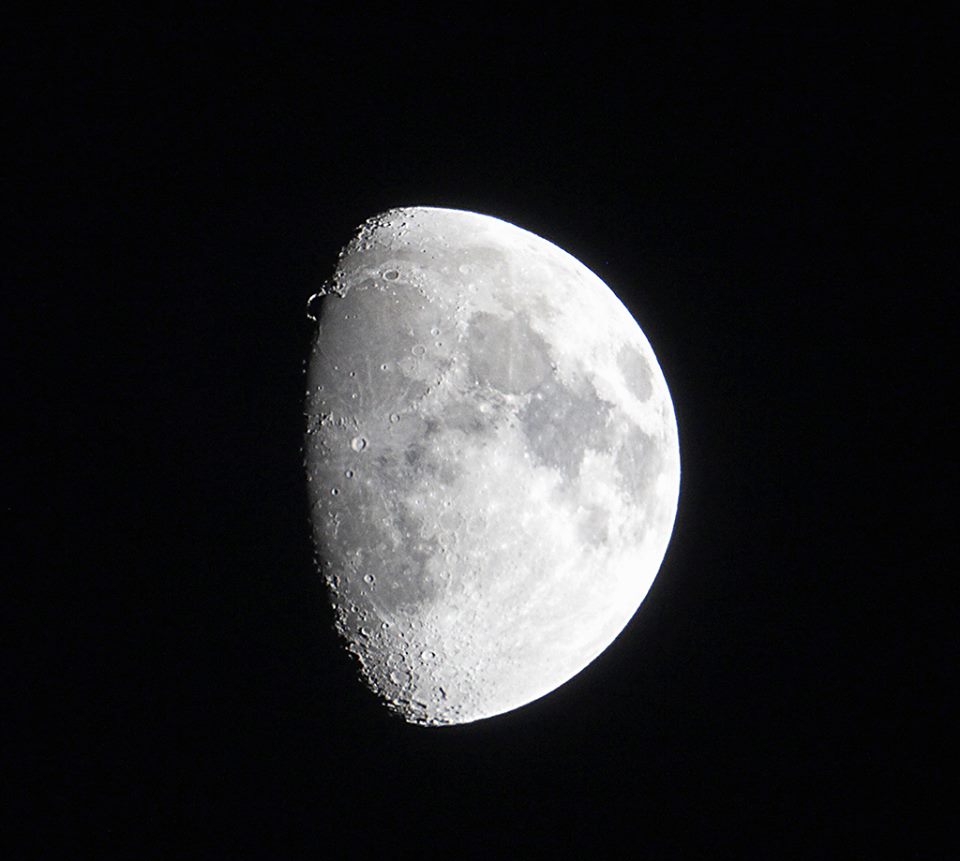 At the same time, it is the only celestial body whose surface we can see with the naked eye. The large dark spots are particularly noticeable. It used to be thought that they were oceans of the moon. Even today they are called seas (Latin Mare, plural Maria).

In reality, however, there is no water on the moon. The so-called seas consist of dark lava rock. You can find more about the surface features of the moon and their formation on the "Moon surface" page. 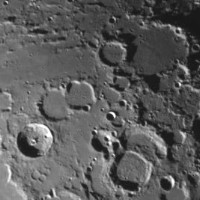 You can see a lot more with binoculars or a small telescope. The surface of the moon is very varied, littered with craters and interspersed with mountains.

Just go on a voyage of discovery with binoculars! You will be surprised what there is to see on the moon!

In addition, something new appears every day, while the sunlight wanders over the moondust and illuminates new craters and mountain ranges, while others disappear in the dark of night.

The border between day and night is called the terminator. You should take a closer look there, because everything comes to light here through the shadows cast.