What has changed the course of human history?

Walking upright is an important step in human development. The decisive prerequisite, however, is the invention of tools and the associated enlargement of the brain. Only around 2.5 million years ago did this lead to the appearance of the first real humans (Homo habilis and Homo rudolfensis) . And here too, climate change seems to have been the trigger again. The climate became even drier, trees even rarer. Bush and grass savannahs increasingly emerged. These reduced the food supply of fruits. Escape from fast predators was also restricted. In this situation, many Australopithecus populations died out. Few groups survived that specialized in locomotion, found new sources of food, and took up defensive weapons. They evolved into Homo habilis (skillful person). Their brains were slightly larger than that of the australopithecins. They already fed on large mammals and made stone fragments that they used as knives. Not only the tool finds, but also the changes in the area of ​​the dentition, where smaller molars now appeared, are evidence of this.

Fiery times with the upright man

Fossil finds around 1.9 million years old prove the occurrence of Homo erectus, the upright person. His arms were shorter and his legs longer, which can be attributed to the loss of his special climbing ability. However, endurance running was now possible, a real advantage when living in the savannah. The nudity that now appears is also characteristic, which can be seen as an adaptation to long-distance running, because it is now easier to regulate body temperature.

The loss of the snout and the doubling of the brain volume must be viewed as an essential evolutionary leap of this kind. This went hand in hand with higher linguistic and cultural skills. He was already skilled in making well-shaped flint tools and he invented fire. Some recent researchers assume that the invention of fire, and with it cooking, made people really smart. This is supported by the fact that the predecessors, all raw food eaters, needed a lot of time to chew, which was now open to conquering the world. Cooked food is also easy to digest - it provides enough "fuel" for the most energy-hungry organ, the brain. Cooking can also have an effect on social behavior, because now you sit by the fireplace and eat meals together. (Bethge, Philip: I cook, therefore I am. In: Der Spiegel No. 52 / 22.12.2007, pp. 127-129)

Homo erectus, the “new intellectual”, was an extremely successful species. He was the first to succeed in colonizing other parts of the world. Fossil finds from Asia exist from less than two million years ago, e.g. the Peking man. The oldest record in Europe is, 650,000 years old, Homo heidelbergiensis, probably from early African representatives of Homo erectus descends.

Neanderthals and Homo sapiens lived in the same habitat for over 10,000 years. But at the end of this time the Neanderthals died out.

Homo erectus evolved into Homo sapiens about 150,000 years ago. These include Homo sapiens neanderthaliensis, the Neanderthals, and Homo sapiens sapiens, the present man. Both lived in parallel for a while until our species finally prevailed. Clear physiognomic characteristics for Homo sapiens sapiens are the lack of bulges above the eyes, a steep forehead and a domed skull, so that the increasing brain volume, which has now grown to around 1500 cm3, finds space. The changed brain volume and the domed skull represent a basic requirement for the cultural evolution of humans.

A main characteristic of cultural evolution is its high speed and this in turn has a specifically human ability as a prerequisite: linguistic communication. This is the only way to enable information to be passed on quickly to all members of a group and thus also to allow human culture to develop rapidly. Today there are around 6000 different languages ​​around the world, which are believed to all go back to one origin. This origin is established regionally in Africa - with our ancestors. The prerequisite for the development of the differentiated ability to speak were anatomical changes in the area of ​​the pharynx and the brain. Paleoanthropologists found the first signs of this development about 500,000 years ago in Homo erectus. The larynx sagged. The reason for this is believed to be that male hominids with lower voices created a stronger impression and thus had advantages in sexual selection. So they could better pass their genes on to the next generations, which resulted in these genes becoming established. The development of the larynx displacement continued over a long period of time up to the position of the larynx of today's humans. So the large room slowly emerged, which serves as a resonance space for the generation of differentiated tones and offers the tongue space for sound generation.

Skull and reconstruction of Homo rudolfensis

At about the same time as the onset of changes in the vocal apparatus, the brain volume of the hominids also increased. Paleoanthropologists see a connection to the development of the speech apparatus, because the prerequisites for speaking do not only have to be created in the area of ​​the pharynx anatomy. Neural conditions must also be present. This is also visible in the ontogeny of human individuals, because it can be observed that brain growth is particularly pronounced in the phase of language acquisition in toddlers. Examining the inside of hominid skulls also supports the early development of language skills. In Homo rudolfensis, the presence of the Wernicke area, which is responsible for speech understanding today, and the Broca area, which is responsible for speech motor skills and sound formation, could already be proven.

In summary, one can say that the human ability to speak arose in the course of the hominid development. Even early hominids lived socially, so the use of language was beneficial. It is assumed that today's differentiated, unique speaking ability has existed for at least 40,000 years.

Before the vocal apparatus and the brain developed into language, there was also communication between early hominids. This probably worked like that of today's monkeys. The exchange did not go beyond clear gestures and simple calls, and with this limited ability to communicate, the cultural evolution that humanity is going through and whose importance has steadily increased since the late Paleolithic 40,000 years ago would certainly never have occurred. It was the development of culture that brought the great selection advantages for our ancestors and thus led to the constant interplay between cultural and biological evolution. 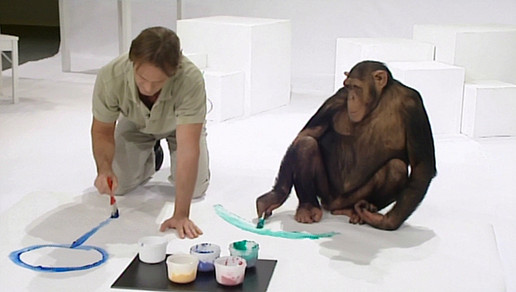 "Biological evolution" means the transfer of genetic information from one generation to the next. But cultural evolution works very differently. This is not about passing on information in genes, but with the help of behavior and language. The spread happens quickly and through many individuals, not just through the offspring. Stone tools are the earliest evidence of cultural evolution. They were used, for example, to procure food, but also for defense. An important achievement of mankind is writing, whose roots 3000 BC. In the Middle East and Egypt. It is the actual medium that allows accumulated knowledge to be passed on over generations.

The cultural evolution is continuous, but there have always been new achievements. The development of the font, for example, was a milestone. The industrial revolution probably brought about the greatest acceleration. Since then, new technologies have developed at an unprecedented rate. With the help of these technologies, people try to modify the environment according to their needs and thus accept - consciously or unconsciously - that many other types of organisms have to give way. However, humans are also intelligent beings and are therefore able to rethink their actions. That he is rethinking his role as a fellow creature on this planet is shown by the fact that the term “sustainability” has become more and more important over the past two decades. The cultural evolution cannot be stopped, but perhaps we will be able to develop more considerately towards the environment, other organisms and future generations.

Footprints between which there are three million years: the footprints of the pre-humans at Laetoli and the bootprint of the first man on the moon.