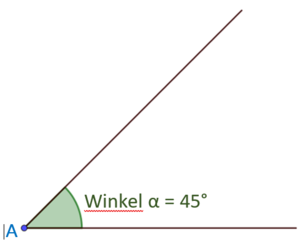 Two straight lines intersect at a point A. They form the acute angle α, i.e. alpha, which is 45 degrees.

With such set square you can measure and also draw angles.

Angles are measured with a set square or a so-called protractor. They are marked with an arc in a drawing. They are usually named with Greek letters. They are then called, for example, Alpha, Beta, Gamma or Delta.

Angles also play an important role in everyday life. In ships and airplanes, the exact direction in which one is moving is also given in degrees. When surveying the earth, angles are also very important. If you turn around yourself with the skateboard, you do a 360, that is, one turn of 360 degrees.

For "Winkel" there are also other search results from Blinde Kuh and Ask Finn.