What date did Margaret Thatcher die?

Her intransigence earned her the nickname "Iron Lady". Margaret Thatcher was British Prime Minister from 1979 to 1990, and her economic and social policy was so characteristic of her reign that this policy was named "Thatcherism".

Thatcher was born Margaret Hilda Roberts on October 13, 1925 in the small town of Grantham. Her father Alfred was a grocer and politically active. Thanks to a scholarship, the young Margaret Roberts was able to study chemistry at Oxford. She was also the chairman of a political student organization there. After graduating, she worked as a chemist, but never lost interest in politics. 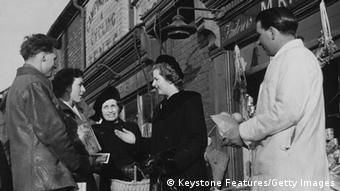 After trying unsuccessfully to move into the House of Commons as a Conservative candidate in 1950 and 1951, she studied law. In 1951 she married the entrepreneur Denis Thatcher. Two years later she became the mother of twins.

In 1959 she was finally elected to parliament and a little later received a post in Harold Macmillan's cabinet. The Conservatives were voted out of office in 1964, but came back to power six years later. Prime Minister Edward Heath made Thatcher Minister of Education and Science. During this time she became a “milk robber” because she abolished free milk in elementary schools. When the Heath government fell into crisis, Thatcher saw its opportunity. In 1975 she ran against Heath for party leadership - and won. 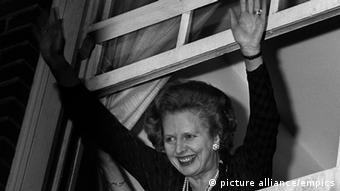 Margaret Thatcher after an election victory

Domestically, the 1970s were characterized by labor disputes. In 1979 the situation got so bad that the Labor government had to resign. The Tories, as the Conservatives are also known, won the new elections, and Thatcher became the first woman to head the country.

Fighting inflation was a priority at the start of her tenure. Features of their policy, known as "Thatcherism", were also privatizations and their commitment to the principle of the free market.

Thatcher cut taxes, cut subsidies, and cut government spending. Coal mines and steel mills were closed in rows. In 1984/85 the miners gathered all their strength for a strike. Thatcher stood firm, the strike was called off. Not all Tories supported their policies, but Thatcher stuck to their course.

Thatcher as chief of the armed forces

Thatcher is said to have liked her nickname "The Iron Lady". It was awarded to her in 1976 by a Russian newspaper in response to Thatcher's criticism of the repressive policies of the Soviet Union. The name became a symbol of their refusal to give in to the pressure of the opposition.

During the Cold War, Thatcher was a loyal ally and friend of the then US President Ronald Reagan: she had the US stationed nuclear-armed missiles on the British air force base on Greenham Common and tripled the British armed forces with nuclear-armed submarines. 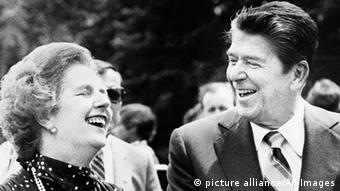 On April 2, 1982, the Argentine military junta invaded the British-controlled Falkland Islands and claimed that the archipelago belonged to Argentina. The Falklands War was a defining moment for Thatcher. She sent British naval forces to retake the islands - and Argentina surrendered two months later, on June 14th. The victory secured Thatcher's re-election.

In her second term, Thatcher continued her monetary policy - especially with regard to the privatization of state-owned industries. Millions of "ordinary" citizens were encouraged to buy shares in British Telecom and British Airways, for example.

Thatcher extended her tough stance to include the conflict in Northern Ireland and refused to give prisoner status to prisoners of conscience to IRA supporters who were in custody and hunger strikers. Ten of them died. On October 12, 1984, the IRA bombed them at a Tory conference. Five people were killed, Thatcher escaped unharmed - and delivered her speech as planned.

In 1987 Thatcher was elected Prime Minister for the third time. One of the most controversial measures of this term was the introduction of a poll tax. Many of her party colleagues feared that the tax would cost them the next election and wanted to get rid of them - and Margaret Thatcher with her.

Internal party resistance to them grew. In 1990, Deputy Prime Minister Geoffrey Howe resigned in protest against her anti-European policies and leadership style. When Thatcher threatened to lose the battle for party leadership, she finally gave up her post as prime minister.

John Major was her successor. Thatcher continued to get involved politically, writing her memoirs. She received incomprehension when in 1998 she spoke out in favor of the release of the Chilean dictator Augusto Pinochet, who was arrested in London.

In 2002, Thatcher suffered several minor strokes and also developed dementia. Her public appearances became less frequent. In 2007, however, she appeared to unveil a bronze statue in the House of Commons. "I would have preferred iron," she said of the statue at the time, "but bronze does too. It doesn't rust."