How to add images in WordPress

In this post I introduce the Featured Image Caption plugin, which you can use to add captions for WordPress featured images. Featured image subtitles are a great way to identify the source or creator of the image.

However, featured images do not show any labels because they are displayed by the theme. With the Featured Image Caption plugin, the caption can also be added for featured images.

The plugin can be downloaded for free from the WordPress plugin directory and is compatible with the current WordPress version 4.7.4.

Enter the caption and source

The plugin adds a new metabox called Featured Image Caption for entering subtitles and image source in the admin area. 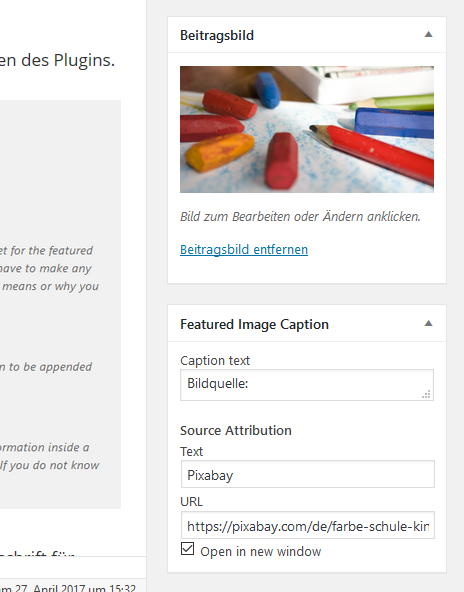 There is a separate field for the caption Caption text offered by the plugin. Here I would have liked that the existing field could also be used for image captions from the WordPress media library.

Link text and URL can be entered to specify the image source and the link can be opened either in the same or a new window.

Automatic display of the caption

Under Settings → Featured Image Caption you will find the options of the plugin. 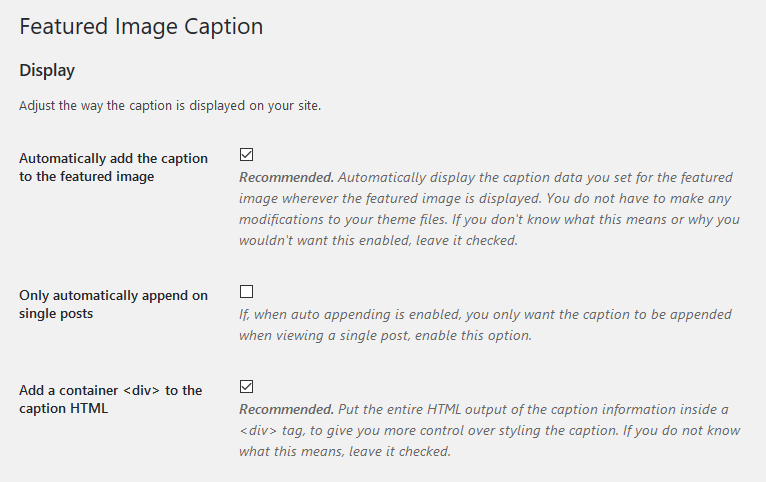 The display of the image captions can be restricted to individual posts with the second option.

Functionality and requirements of the plugin

The plugin uses the filter post_thumbnail_html to attach the caption to the template functions for displaying featured images.

In addition, the caption is only automatically displayed for featured images that are displayed within the WordPress loop. TwentySeventeen, for example, uses the featured image function for individual posts in the header.php and thus outside of the loop. This is why the automatic display does not work here.

Manual output of the picture subtitles

If your theme does not automatically display the captions under featured images for the reasons just mentioned, these can also be output manually in the theme.

The plugin provides the template function for this cc_featured_image_caption () ready. This can be integrated anywhere in the theme files, preferably of course directly under the functions for displaying the featured images.

An if query with function_exists () ensures that the theme continues to work if the plugin has been deactivated:

As always, we recommend using a child theme to adapt the theme files.

Alternatively, the plugin also provides the shortcode [ccfic] for insertion in the WordPress editor, with which the caption can also be added directly to the post.

If the caption is to be displayed in the blog and archives, the fields for the image source should not be filled out.

Then the plugin adds the link to the image source, which creates a double link with the existing link in the theme. However, nested links are not allowed in the HTML specification and often lead to layout problems.

If the image source is to be specified with a link, the display of the image caption in the plugin options can also be restricted to individual contributions, which the featured images usually display without a link.

By default, the caption and image source are in a wrapper div with the class .ccfic, which can also be deactivated in the plugin options.

With the span tags and individual classes, the styling can be easily adapted with a little CSS code.

I use this CSS code here in the blog. The caption is displayed in smaller font and on the right below the image.

Overview of all articles in this series