In the 2016 US presidential election, many working-class voters who had previously voted for Democrat Barack Obama switched camps and voted for Republican Donald Trump. He started with the full-bodied promise "Make America Great Again" that he would "make America great again".

The billionaire and host of a reality TV show also promised to drain the Washington "swamp" which, according to Trump, has sold millions of US jobs abroad. He hit the nerve of voters who had watched for years how well-paid industrial jobs were relocated to distant countries, wages stagnated or fell and even the remaining jobs became increasingly insecure.

As early as 2018, halfway through his term in office, Trump was able to point out that half a million jobs had been created in the manufacturing industry in the United States. He saw this as proof of the success of his aggressive protectionist policies. These included the termination of trade agreements, tariffs on foreign steel and aluminum deliveries, and a trade war with China.

No revival of the rust belt

However, the Economic Policy Institute disagrees with the president's claims. In a study published in August 2020, researchers at the Washington think tank come to the conclusion that Trump has failed to revive the former industrial areas in the northeastern United States. Poster outside a house in Chagrin Falls, Ohio. The so-called Rust Belt is suffering from the collapse of the industry

This region, known as the "Rust Belt", had seen a sharp decline since the 1990s. Even in Trump's first two years in office, more jobs were lost in the manufacturing sector than new ones were created, according to the institute.

"President Trump's erratic, self-centered and inconsistent trade policy has made no measurable progress despite the new militant rhetoric," the report said. "Additionally, COVID-19 and government mismanagement of the crisis have wiped out much of the jobs created in US manufacturing over the past decade."

The report adds weight to the criticism that Trump is an industry president in a post-industrial country. Because the manufacturing industry only has a share of eleven percent in the economic output of the USA - that is the lowest level since the Second World War.

In the election campaign for his second term in office, Trump is often attacked for his inconsistent reaction to the corona pandemic. While he lags behind his challenger Joe Biden in the polls, Trump, on the other hand, tries to emphasize the economic successes of his first term in office. In the first TV debate with Biden, for example, he claimed that he had "brought back" 700,000 jobs in the manufacturing sector. The bottom line is that 237,000 industrial jobs have been lost since Trump took office, as the fact checkers from Politifact have shown.

Records on the stock exchanges

Trump also regularly references Wall Street stock prices, which have skyrocketed during his tenure and quickly recovered from the initial corona shock. Since he took office in January 2017, the Dow Jones Index has risen by almost 40 percent and, at around 27,000, is not far from the 29,570 points that marked the previous high in February 2020. And the Nasdaq tech index even doubled under Trump. 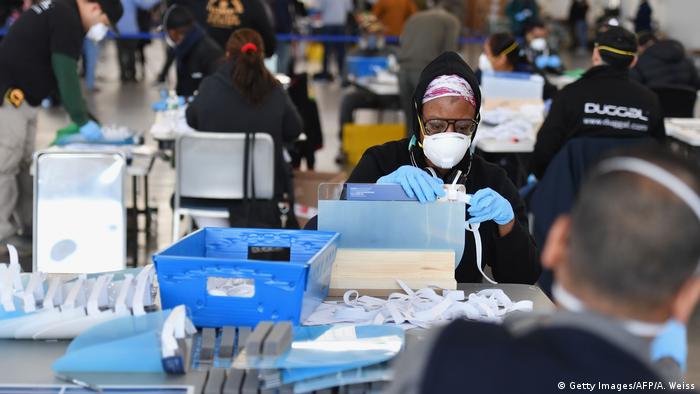 However, many economists attribute the stock market boom less to Trump than to the US Federal Reserve. In response to the financial crisis, under Trump's predecessor Barack Obama, it had already lowered interest rates and washed trillions onto the markets through a loose monetary policy, while share buybacks by Apple, Microsoft and Google's parent company Alphabet additionally fueled prices. Ordinary citizens would not have benefited as much from all of this as large corporations, so the argument goes.

"Before the pandemic, the US economy performed roughly as it did under Obama in terms of growth, employment growth and inflation," said Joel Prakken, chief economist at the London-based analysis firm IHS Markit. When asked what successes are due to Trump, he told DW: "Few, if at all."

Tax cut for the rich

Donald Trump is particularly proud of his tax reform. The top tax rate for companies was reduced significantly from 35 to 21 percent in 2017; that for private individuals fell from 39.6 to 37 percent. The cuts have helped boost the stock market by five to seven percent, according to Prakken, but also led to "a significant increase in the US budget deficit, with possible negative long-term effects on US living standards."

The non-partisan Tax Policy Center analyzed more than 60 percent of tax savings for the top 20 percent of wealthy Americans shortly after the tax reform came into force. Economists also pointed out that the revival in consumption and investment was short-lived and that low-income citizens hardly benefit. Nevertheless, Trump has promised to make the temporary tax cuts permanent in the event of his re-election and also to lower wage taxes.

Trump has repeatedly emphasized his America-First stance, especially on trade issues. For him, this also includes the tariffs on a large part of Chinese products, because China has now gained an unfair advantage in trade with the USA. Trump says his policies have led multinational corporations to move jobs back to the US, as well as forcing other countries to open their markets to US firms.

"The tariffs against China did not help the manufacturing sector much," says IHS Markit expert Prakken, "and they even reduced farmers' incomes." Thousands of farmers went bankrupt because China restricted imports of agricultural products from the US, Prakken said, while FDI in the US had changed little.

In July "NAFTA 2.0" came into effect, the updated version of the 25-year-old North American free trade agreement between the USA, Canada and Mexico. Trump had promised that this would create 180,000 new jobs in the United States. However, the agreement does not contain any provisions that would prevent US jobs from being relocated to the low-wage country of Mexico. US automakers continue to move plants to Mexico.

Corona and the election date

Election research shows that economic development just before the election can be decisive, says Prakken. "Most models assume that low unemployment and income increases in the six to nine months leading up to the election are particularly important." After the Corona lockdown in the spring, in which 40 million people had lost their jobs in the meantime, Trump had hoped for a quick recovery of the US economy. And indeed, many economic indicators pointed up again in the summer.

In the meantime, however, the number of infections has risen to new record levels, this week there were for the first time 70,000 new cases within 24 hours. All of this endangers the slight recovery since the summer months. The election date in early November, in the middle of the next wave of pandemics, comes too early for Trump.

Adapted from the English by Andreas Becker