Iltisstraße, Berlin-Dahlem: Who doesn't think of the small indigenous predator from the marten family, which may have been the inspiration behind the name? But that was by no means the case - the street name is still reminiscent of a chapter in German colonial history.

Originally, the Iltisstrasse was intended to honor the successful attack by the German gunboat “Iltis” under Captain Lans on the Taku- / Dagu forts in line with the adjacent Lansstrasse and Takustrasse. The forts had tried to protect the entrance to the large port city of Tianjin - and thus the way to Beijing. The attack was the prelude to the colonial war of 1900/1901, the bloody battles of German and Allied troops against the Chinese Empire and a climax of the aggression of the imperialist powers.

With the conclusion of the Prussian-Chinese Unequal Treaty of 1861, Prussia, as the forerunner of the German states, also joined the phalanx of imperialist powers, which since the first opium war in 1840/42 severely restricted the territorial, political, financial and economic sovereignty of the country Made China an informal colony. With the Second Opium War in 1858/60, these semi-colonial structures were strengthened and expanded. The most profitable commodity was opium. The fact that it was a drug with devastating consequences for individuals and for the entire country was played down. According to the new treaties, opium, like all other goods, could now be imported at dumping prices.

The country's economic and financial fabric was destroyed, and China was forced to borrow large amounts of money to pay huge amounts of compensation to the imperialist powers. Large strata of the population became impoverished and as a result there were uprisings - against the foreign aggressors and their representatives and against the Qing government, which could not stop this exploitation and financial bleeding of the country. Prussia, from 1871 the German Empire, benefited from the economic advantages of the semi-colonial system since 1865, and sometimes used its military ships that patrolled the coast for local use in the ports or threatened to do so. The acquisition of a territorial colony similar to that of Great Britain's Hong Kong, as it had been striving for since the 1870s, was not for a long time due to the determined resistance of the Chinese government. However, the experts acquired the diplomatic, linguistic and regional knowledge required for further expansion, and with the establishment of the Seminar for Oriental Languages ​​in Berlin in 1887, the systematic generation of the knowledge necessary for colonial expansion also began for China.

“Coal station and naval base” - these are two more misleading terms that were used in negotiations between German diplomats and the Chinese government in 1897/1898 after German troops occupied an area in the Jiaozhou Bay with the port city of Qingdao. After long negotiations and under threat of further military aggression, the area was pressed from the empire for 99 years as the "leased area Kiautschou". Designating the colony as a "lease" was the only thing the Chinese negotiators could achieve. However, as always in the following decades and in some cases to this day, this area was referred to as a “protected area”, a “model colony”: From 1897 to 1914 it was de facto a German colony and a part of Shandong Province, in order to strengthen it, directly German “Sphere of influence” with special economic and military rights. “Model colony” - another misleading term: it was developed as a propagandistic counterpoint to British Hong Kong and was an expression of German-British rivalries on international markets. At the same time it served as legitimation and as a disguise of the colonial character of the German occupation. Because in China, too, it was about conquest, a military base, the development of sales markets and the exploitation of the rich coal deposits in Shandong for the German navy in East Asia and profitable investment opportunities for German capital. Kiautschou was subordinated to the German Reichsmarineamt, a governor ruled over the defeated.

As in all territorial colonies, a spatial and socio-cultural segregation of the rulers and the ruled was enforced, inequality was reproduced and specifically colonial instruments of rule were established: first of all, the complete abolition of the sovereign rights of the Chinese state, aggressive military action by the troops and all kinds of resistance , including so-called punitive expeditions, especially in the early days. This was followed by expropriation and resettlement measures against the rural and urban population, the restriction of Chinese trade activities, the suspension of the Chinese social and legal system and the establishment of a two-part new legal system, as well as the ban on the settlement of Chinese people in the so-called European quarter.


The fact that from around 1904 the Germans placed great emphasis on the so-called cultural mission of Germany, with less emphasis on the military, was due to the insight that this was the only way for the German Reich to benefit from China in the long term.

Racism, paired with a Eurocentric feeling of superiority, and social discipline were everyday practices that found their strongest expression on the individual level in the everyday violence against the "Chinese" constructed as inferior and in the rape of Chinese women by German soldiers. Marriages between Germans and Chinese were not forbidden by law, but they were socially sanctioned - for example, German men of the colonial lower class lived with their Chinese wives and children in an insecure legal situation.

Of course there was also resistance against the colonial rulers: While the class of civil servants and scholars, especially against the emperor, demanded massive but unsuccessful political reforms and the merchants managed to assert their economic interests more and more, the simple rural population resisted, which saw its cultural order threatened primarily by the foreign missionaries, also by acts of violence that led to the Boxer movement and the subsequent colonial war of 1900/1901. The German Reich also had its share and its profit in this war: it had the military command of the troops sent by eight Allies, it pocketed a large part of the compensation that China had to pay and, not least, it went to the account of the Germans Troops launched a series of acts of violence and so-called penal campaigns against the insurgent boxers and the population.

The fact that from around 1904 the Germans placed great emphasis on the so-called cultural mission of Germany, with less emphasis on the military, was due to the insight that this was the only way for the German Reich to benefit from China in the long term. And the fact that a modern urban infrastructure and traffic structure with medical and educational facilities (military hospitals, hospitals, schools, observatory, German-Chinese university) was built in the European quarter in Kiautschou, which was partly also used by the Chinese population, also had a propagandistic effect : The colonial project should demonstrate civilization, progressiveness and modernity to the Chinese people as well as to the international British rival. Up to the present, this offers points of contact for the emergence and transmission of the narratives of modernization in German, as well as in some cases in Chinese historiography. 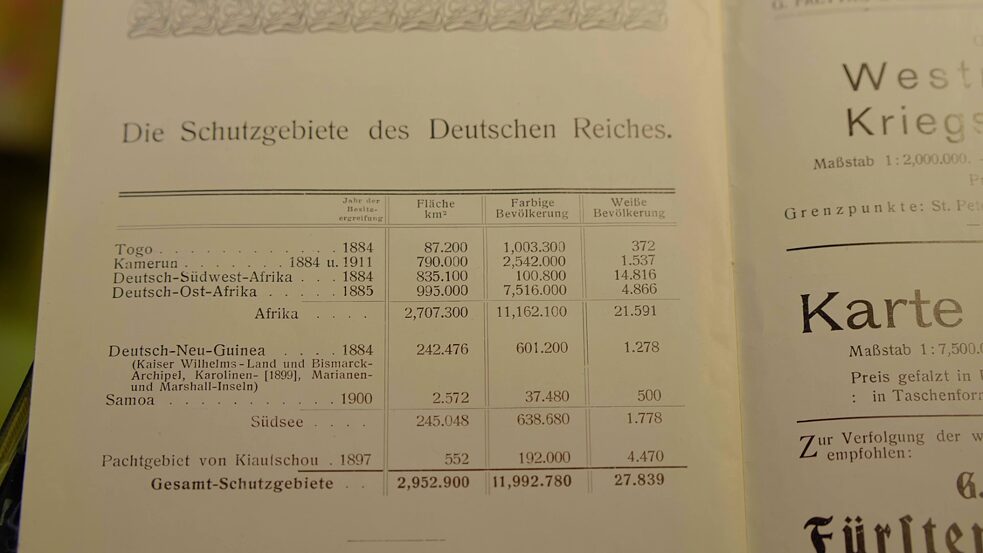 © Goethe-Institut China 2019
At the beginning of the First World War in 1914, Kiautschou was occupied by Japanese troops. The colonial rule was over. After the end of the German Empire in 1918, all colonial claims were formally renounced - the other imperialist powers did not do so until 1942. In the cultural memory of China, the political leadership as well as the intelligentsia, the colonial era is still today the century of shame present from 1840 to 1942 and also serves as a background for the formulation of foreign policy strategies.

In the triangle of Iltisstrasse, Takustrasse and Lansstrasse in Berlin-Dahlem, an information board was set up in 2011 after a long period of civic engagement, referring to its colonial origins. Kiautschou-Strasse in Berlin-Wedding, on the other hand, has remained without reference to the historical background to this day. The German colonial project in China has no place in the cultural memory of most Germans or is associated with “model colony” and modernization.

You can find out more about German colonialism in China in this interview with Qingdao's city historian Zhu Yijie:
<?