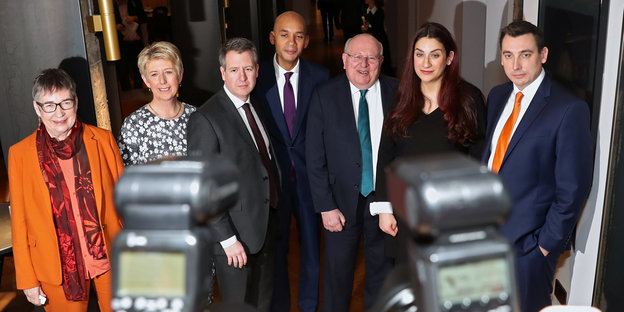 The British Labor opposition has split. Seven Labor MPs appeared in front of the press in London on Monday morning and said they had left the party and would in future sit as independents in the House of Commons. Observers see the move as a possible harbinger of lasting upheavals in the partisan landscape in Great Britain.

The seven dissidents are well-known critics of Labor leader Jeremy Corbyn. The central current point of contention is the attitude towards Brexit: Corbyn and the party left are EU skeptics, the dissidents are against Brexit. But in the first place in their exit declarations, which the seven read out one after the other, was the change of Labor under Corbyn.

"Labor is now a racist, anti-Semitic party," said Mike Gapes, 66, a Labor member since the age of 16. Labor today is "not the party I joined and which I have supported for so many years". Gavin Shuker said Corbyn Labor "has turned its back on the British public, its hopes and ambitions". Angela Smith gave the following picture of the state of the Labor Party: “It is ruled by intolerance and extremism. She is unfriendly and divisive. It is a threat to the future of our country. And it can no longer be saved. "

The spokesman for the seven is Luciana Berger, chairwoman of the parliamentary wing of the Jewish Labor Movement. She repeatedly criticizes Corbyn's lack of commitment to anti-Semitic failures in her own ranks - beyond questioning Israel's right to exist, this goes as far as denying the Holocaust. Her left-wing radical local association Liverpool-Wavertree recently tried to express her distrust. A corresponding motion was withdrawn after Labor Vice President Tom Watson intervened and threatened the suspension of the entire local chapter - one of his spokesmen had called for the MP to be “exposed” as a “Zionist troublemaker”.

673 anti-Seminist incidents in almost a year

A little later, the Labor leadership published figures on anti-Semitic incidents in their own ranks for the first time. Accordingly, between April 2018 and January 2019, 673 incidents were investigated and 96 decisions were made, 12 of which were party expulsions. In her resignation statement, Berger said it had become "embarrassing" to remain a Labor member. She called the collective exit “difficult, painful, but necessary”.

It must be thought that a Jewish politician has been disgusted from Labor, remarked a Labor loyalist on television yesterday. It is not only this reaction that shows that the move by the seven MPs goes far beyond those affected.

The best-known of the seven is the South London MP Chuka Umunna, a half-Nigerian vote and in the past acted as the future Labor leader. He now declared war on the mainstream parties: Britain needs change, but "they cannot be the change because they are the problem".

Other members are also rethinking their Labor future

The seven do not want to give back their seats and therefore do not want to force by-elections in their constituencies. They are now joining three former Labor MPs who have already resigned. Commentators expect further withdrawals depending on the progress of the Brexit debates. Labor leader Corbyn said in a first reaction that he regretted the resignations. Others were clearer: the Labor youth spread verses from the party song “Rote Fahne” that spoke of “traitors”.

At the Labor base, which is more pro-EU than the leadership, however, many members are now rethinking their future. The question now arises as to whether the “Independent Group” - which so far has neither a structure nor a leader - will become the core of a new party, as was last seen in 1982 when the right-wing Labor wing split off as the “Social Democratic Party”, which then merged with the Liberals . There has been speculation for a long time that EU-friendly deviants from Tories and Labor could found an anti-Brexit party.