Are conservative politics cruel or different

In a guest post for “Welt”, the CSU member proclaimed the “conservative revolution”. He throws himself at the right-wing populists in an arch reactionary way. 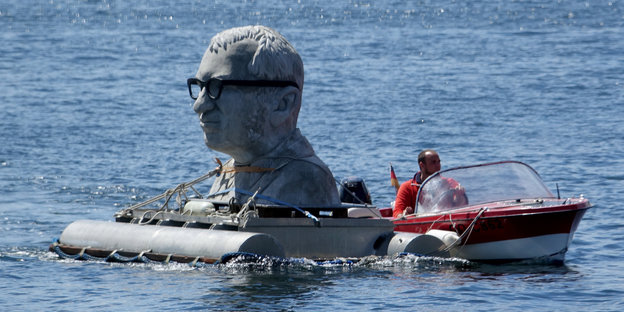 Will conservatives erect a monument to Alexander Dobrindt as the new leader of the revolution? Photo: dpa

CSU politician Alexander Dobrindt calls out in a guest post for the world the "conservative revolution" in Germany. At first glance, this seems paradoxical, as one understands conservatively as follows: Everything that has been tried and tested should please remain as it was before, only the most pleasant of progress - just like the CSU in Bavaria makes politics. In the 1950s, however, the expression “conservative revolution” was coined by Armin Mohler, an apologist of the right to this day, who wanted to endow those ideologues with dignity who opposed the liberal values ​​of the Weimar Republic and ensured that Hitler would at least be more intellectual for his seizure of power Level no longer had to do a lot of persuasion.

While the term remains controversial, it is a beloved label of new right-wing thought leaders and identitaires. Revolutionaries, that sounds pretty daring, much better than, for example, “pioneers of National Socialism”. Did Dobrindt think that too? Didn't the man know what associations he was calling up? Or did he not care?

Basically, it doesn't matter. Because otherwise the text leaves little doubt that his idea is not conservative, but reactionary. He railed against an ominous alliance of “socialists, nationalists, ecologists, Islamists” and “left opinion supremacy” since 1968. One can agree that the liberal media public has a problem with the discourse, keyword filter bubble, as can political correctness. But: to conjure up an elite left-wing intellectual who is remote from the people and who have “secured key positions” - Dobrindt sounds like Trump with Duden. His sense of reality is similar: the Union has been in power for twelve years, the AfD sits in the Bundestag, hatred against refugees rages on the net and on the streets. Really dominated everything terribly left.

Much more interesting, however, is the question of what the revolution should consist of. Deport retired old 68ers to Goa? Or maybe everyone with torches and pitchforks to the Chancellery? Unfortunately Dobrindt does not answer. But it can be guessed: All who are not like “we” have to remove “we” from their power. The AfD's electoral trumpet, “We'll bring our country back”, greets you, and you don't want to imagine what “bring back” actually means, let alone “back”.

A big favor to the AfD

Dobrindt's plea for more intellectual freedom actually wants the opposite: identity simplification and anti-pluralistic narrow-mindedness. Whoever is not for us is against us. But who are "we"?

This text comes from the taz on the weekend. Always from Saturday at the kiosk, in the eKiosk or with a practical weekend subscription. And around the clock on Facebook and Twitter.

The rhetoric speaks for itself: “Home and fatherland are the roots of our identity”, “when we celebrate our folk festivals (...) we feel that we belong together”, in this style it goes on and on, migrants appear at most as Islamists . There, now feel the patriotism in you, and if there is none, then you don't belong: It reminds of the new right ethnopluralism.

If the language wasn't so polite, you might think that Alice Weidel was writing about Pegida here. To hijack the AfD's fantasies of overthrowing, even with such a Germany-must-become-Bavaria-Schmonzette, will save neither democracy nor state elections. Right-wing narratives are not rededicated here, but spread right down to the middle and solidified there. In this respect, Dobrindt's text is not only naive, but also a great favor to the AfD. A conservative oath of disclosure.