How does sodium smell

What does sodium look like, smell and taste? [Edit]

Pure sodium is a soft, silvery metal. Sodium is a very reactive metal that reacts violently with water. Sodium is therefore stored in paraffin oil or petroleum to protect it from water and air. It's such a soft metal that you can cut it with a knife. You cannot taste it in its pure form because it reacts too quickly with the water in the spit and is therefore dangerous. It gets hot and creates a corrosive liquid and hydrogen. When combined with chlorine, it tastes salty. The more of this compound is contained, the salty it tastes (e.g. water or food).

How was sodium discovered?

Sodium was discovered by Humphrey Davy in 1807. He isolated it from sodium hydroxide (NaOH) by fused-salt electrolysis.

Where does the name come from? [Edit]

Did you know that...

Where can you find sodium?

Since sodium is a very reactive element, it is never found in nature in its pure form, only in compounds. The most common compound of sodium is sodium chloride (NaCl), i.e. table salt. It is therefore found in sea water and in mountains as rock salt. Sodium is also relatively common in stars.

What is sodium used for? 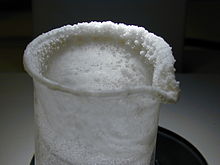 This beaker is coated with common salt crystals, which consist of sodium and chloride ions.

We use sodium every day because it is found as salt (NaCl) in our food as a spice. We also use it as baking powder or soda in the compound (NaHCO3). Sodium is also used in most soaps and detergents.

Sodium is needed in the body for blood, brain, cell and heart activities. It is so important that humans and animals are adapted to the salty sodium ion.

Sodium is a very reactive metal, when it comes into contact with water, hydrogen gas is produced which can explode with air, the so-called oxyhydrogen gas explosion. The caustic soda (NaOH) is very corrosive and must not be touched.