How did Japan get rich

A German fighter forcefully pulls a Japanese soldier into the air - the German grabs his ear painfully. A terrible fate awaits the Japanese on this German propaganda card from the First World War: the oversized German soldier, with his uniform jacket casually open, holds the breeding rod in his hand. Other opponents who have already felt the German anger lie at his feet, for example Serbia and France. So now it's Japan's turn. Accordingly, the card is titled: "Des Deutschen Abrechnung". Then follows a cynical as well as racist rhyme: "Come on, you little Jap !!! Swiping and sloshing with German fists - one behind the ear, but not too close !!! You feel like the others here, you treacherous Mongol animal! "

Defeat in the Far East

This field postcard turned the real balance of power on its head. In fact, the Germans had suffered a devastating defeat against the Japanese Empire. 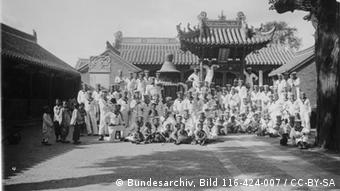 German marines in the Kiautschou colony

On August 23, 1914, Japan declared war on the German Reich - and began to siege the German colony of Kiautschou in China. 50,000 Japanese surrounded the German reserve in the Far East, which was defended by just over 3,000 German marines. Emperor Wilhelm II had ordered extreme resistance to his men in Kiautschou. But in a hopeless situation, the German governor had to surrender to the vastly superior attackers on November 7, 1914.

For the Germans, the conquest of Kiautschou by Japan was a disgrace - after all, they regarded the small Chinese estate as a German "model colony".

From then on, the Germans settled accounts with their Far Eastern enemy in their propaganda. The above propaganda card mocks the Japanese as a "treacherous Mongolian animal" and even denies them humanity - they are degraded to animals. At the same time alludes to the Mongolian cavalry armies that invaded Europe centuries ago and had spread fear and terror - now the German soldiers were supposed to protect their country and its possessions from the "Japanese danger" from the east. 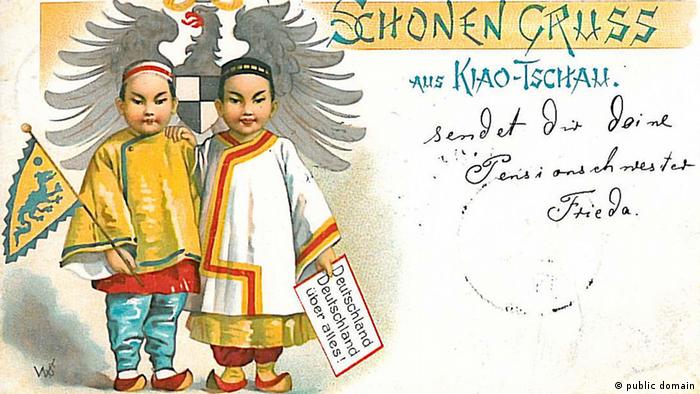 A postcard from Kiautschou with the text "Deutschland, Deutschland über alles!"

The emperor as a racist

Germans and Japanese actually had a good relationship with one another. Since Japan opened up to foreigners after a good two hundred years of isolation in 1854, the country has taken Germany as an example in many areas. For example, Japanese civil law is largely based on the German civil code. But soon the two powers Germany and Japan competed for influence in the Far East. Above all, the German Kaiser Wilhelm II was to blame for the significant deterioration in German-Japanese relations. 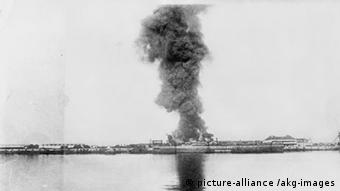 The Japanese were "out for all of Asia", the German emperor exclaimed at the Russian tsar in 1907. And fantasized about a race war: "They carefully prepare their blows and they will be directed against the entire white race". The emperor referred to the Japanese as the "yellow danger" and thus took up a widespread prejudice. He disparagingly called her "Japsen". The contempt of Wilhelm II was hardly hidden from the Japanese. He treated their diplomats harshly and rudely.

In person, Wilhelm II waged a propaganda war against Japan and East Asia. In 1895 the emperor drew up a sketch which was intended to call upon all of Europe to resist the alleged "yellow danger". The painter Hermann Knackfuß then created a painting according to the imperial specifications. The Archangel Michael, as the German patron saint, calls on the peoples of Europe to fight against the danger from the East. "Germania", the personification of Germany, "Marianne" as the embodiment of France, and other European nations look to the east with concern. 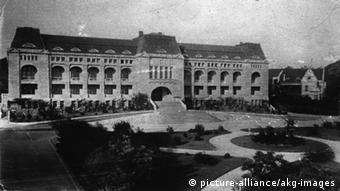 The seat of the German governor in Kiautschou

There, in the middle of a threatening storm, lurks a mighty Buddha as a symbol of the "yellow danger". On the other hand, a Christian cross floats above Europe in radiant light. Here the civilized Occident, there the dark Asia with its "yellow hordes", this is how Wilhelm II divided the world into good and bad. "Peoples of Europe, preserve your most sacred goods", the German ruler called this picture. He sent copies to Tsar Nicholas II, the President of France and many other politicians.

In 1914 the Japanese reciprocated for the humiliation they had suffered. They took not only Kiautschou, but also German possessions in the South Seas - and thus displaced the Germans from the Far East. In doing so, they are not only taking revenge for the anti-Japanese propaganda from Germany. In 1895 the Germans prevented the Japanese from taking possession of the Chinese Liaotung peninsula. Now they took Kiautschou away from the Germans in return.

The German general Karl Haushofer, who had served as a military advisor in Japan, wrote after the war: "The Japanese have a long memory in matters of national honor and security". But German-Japanese relations soon improved again. After all, both countries fought as allies in World War II in 1941 - and jointly waged aggressive wars of aggression against their neighboring states.