Manipulation: Everyone manipulates everyone

There has been an interesting hypothesis in psychology since the 1980s that assumes that we manipulate everyone - at any time: the baby manipulates his parents with screams so that they give him food; Parents manipulate their children through rewards or punishment to make them do what they are supposed to; Lovers manipulate one another through affection or withdrawal of love. And even this roller coaster of emotions is manipulationto keep love interesting In friendships, in leisure time, in the office - it continues everywhere. In short: if you believe the hypothesis, we do nothing without calculation, without motive. That doesn't mean that we are constantly aware of this, but there is a calculation behind it ... 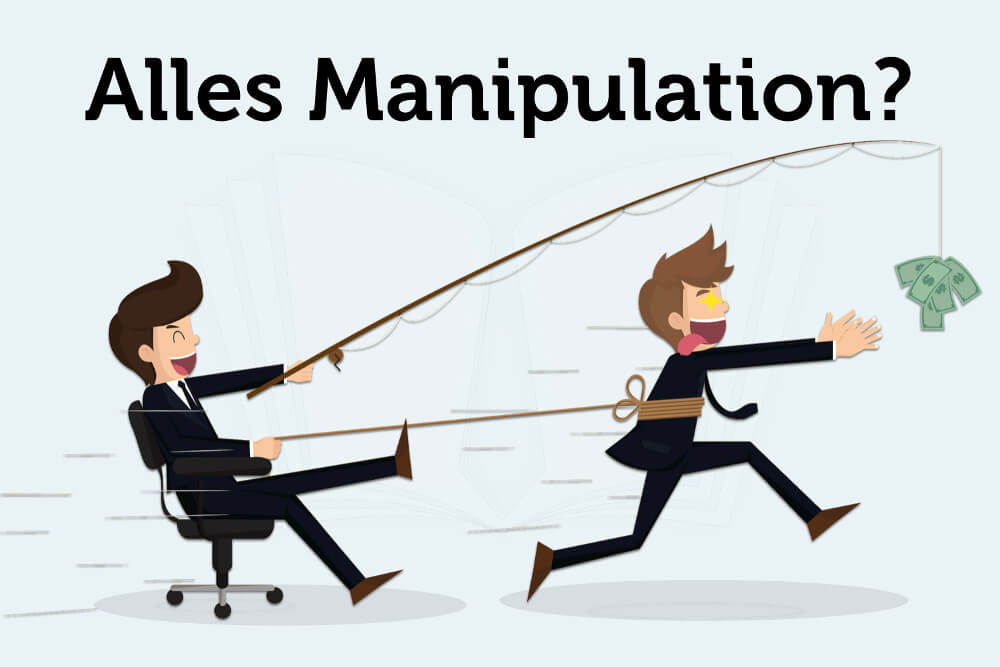 Meaning: manipulation as a technique for influencing

The term manipulation was originally meant to be completely neutral. It comes from the Latin (manus = Hand and plere = to fill) and means something like having something in hand, handling, use.

This meaning has become in technical language to this day in technology and medicine. In everyday life, however, one finds the definition of manipulation, as the Duden calls it at the beginning, much more frequently. Accordingly, manipulation means a ...

obscure, skilful procedure with which someone gains an advantage, something that is coveted.

With this meaning, the term has long since found its way into the Psychology, Sociology and Politics held and describes the targeted exertion of influence. With this meaning, manipulation is mostly used colloquially.

Those who manipulate influence others in order to often derive their own advantage from them. We want to achieve our own goals, get others to act as we want them to - and because that doesn't always work out by itself, they are skillfully manipulated.

Are you going to read this box?

First I have to apologize to you: You have just been manipulated. With a simple question in the headline. Asking someone a question can have a huge impact on their behavior. Vikki Morrison, Marketing Professor at New York's Stern University, was able to demonstrate this effect back in 1993 by asking his test subjects the simple question why they would buy either a car or a PC. Effect: Among the respondents, the demand for these products increased significantly afterwards. In turn, previous studies showed that students asked who they would vote for in future votes actually voted more often than students who were not asked.

Certainly, this effect itself raises questions: For example, how valid some scientific studies are at all, if they are based on questions.

The knowledge can be reversed just as well use positively: If simple questions cause people to do more of the things they are supposed to do, then this would be a powerful marketing tool. And that's exactly what was done - with Canadian blood donors.

For this study, 4672 blood donors between the ages of 18 and 70 were selected and divided into two groups. Around 2,900 of them were asked to fill out a questionnaire stating why they were donating blood and whether they would do so again in six months.

You guessed what happened six months later: those who filled out the questionnaire showed one after six months higher willingness to donate blood than the members of the control group. Without realizing it, they were manipulated.

In all of these attempts one must admit one thing: it is not enough to ask questions alone. So do people answer, otherwise there is no effect.

Seen in this way, I may have to take back my initial apology and correct myself: not asking a question but having it answered can have a huge impact on behavior. On the other hand, if you have read the entire box up to this point, the question may be enough ...

Manipulation of People: Good or Bad?

Especially when you like some synonyms for manipulation Indoctrination, machination, or suggestion look, negative associations inevitably arise. Is manipulation good or bad? The fact is, we are one Variety of manipulations exposed if you only get under it at first Influencing understands.

To demonize manipulation in principle would certainly be wrong. A distinction should therefore be made between the objectives behind the influence. A simple example To clarify: If parents make the healthy food particularly tasty for their children, it is a form of manipulation. The offspring should be encouraged to eat something, even if it may not taste as good as unhealthy alternatives.

However, the intentions behind it are only the best and put the child's best interests first. The situation is different when manipulation is carried out out of pure self-interest and manipulators only focus on the own advantage are considered. Here the manipulation is to be viewed more critically, because it is accepted to harm the other person or to force him to behave that is not useful for him, but only for oneself.

But even here it is not always very clear. What about negotiations, for example, in which both sides try to manipulate the other and thus get the best result for their own position? Does the employee who wants to get the highest possible pay raise act badly because he influences the boss by presenting his best performance and results?

You already notice the manipulation hardly generally categorized can be. A justification can almost always be found, and it can also be argued that it is an unwanted influence. So it depends on how everyone deals with the manipulation - and how it is counteracted in order not to be able to be manipulated.

Anyone who manipulates another person wants something from them. Seen in this way, it's always about you covert fightto achieve something in the other with one's means. However, that sounds more martial than it is in everyday life.

We know manipulation, for example, in the following contexts:

Nudging: I know what's better for you

In October 2017, behavioral economist Richard Thaler received the Nobel Prize in Economics for his research in the field of so-called “nudging”, which translates as “nudging” or “nudging” - just into that right one Direction.

The idea behind this is that most people are in everyday life irrational and thoughtless behavior. Your decisions are impulsive, but not always wise. Therefore, it is only legitimate to nudge them in the right direction - for their own good, so to speak. Motto: You want it too. Or?

Ultimately, nudging also uses classic manipulation methods. The best example: When that in the canteen Fruit at eye level more employees eat fruit. It's similar in the men's room: Of course, it's not about fruit, but there is also manipulation. For example, with a small glued fly in the urinal. If it is aimed at, it will automatically splash less.

It can also be proven that in countries the Willingness to donate organs increasesif this must be expressly contradicted before the death.

The American psychologist Stanley Milgram demonstrated in 1961 how easily people can still be manipulated in spite of all their enlightenment controversial experiment.

A test subject took on the role of teacher in the experiment and was supposed to be a supposed student electric shock as a punishment administer in case he misrepresented the previously memorized association pairs. The test subject could not see the "student" because he was in the next room.

The “student” was never exposed to real electric shocks. Nevertheless, the experiment was sharply criticized. The fascinating as well as the terrifying was how easy manipulation to enforce is. Years later, there were similar experiments that came to the same result: a belief in authority and a sense of duty still stab morality and compassion.

This is definitely critical with regard to the media. The Israeli-American psychologist Daniel Kahneman describes in his book Fast thinking, slow thinking the following form of manipulation:

A reliable way to get people to believe false statements is to repeat it a lot, because familiarity is not easy to tell from truth. Authoritarian institutions and marketing specialists have always known this. But psychologists have found that you don't have to repeat the fact or idea in full to make it appear to be the truth. People who were repeatedly presented with the expression 'the body temperature of a chicken' were more likely to accept the statement 'the body temperature of a chicken is sixty degrees Celsius' as being true.

Nothing else can currently be observed in right-wing nationalist currents. Regardless of whether you are observing the current President of the USA or various party members in Germany: They are all multiple convicted of false statements been.

But they act on the same principle: frequent Repetition makes the manipulation more effective.

Downside: abuse of power through manipulation

As mentioned, there is one The downside of manipulation. The interplay of charisma and manipulation is downright fatal. This can be seen on a large scale with the so-called charismatic leader:

Dictators like Hitler or Stalin knew how to abuse and mobilize the masses for their own ends. Of course, this only works as long as the population is feels committed to the common visionwho embodied the charismatic leader.

What works on a large scale also works on a small scale. We're talking about Abuse of power in relationships. Regardless of whether it is love relationships or friendships: Manipulation is particularly easy where it encounters a person who does not have a particularly strong sense of self-worth.

And the perpetrators are typical Demagogues, narcissists, and religious leaders. With targeted deceptions, they bring their victims into emotional dependence.

A particularly perfidious method of manipulation is gas lighting, which is for those affected difficult to see through at first is.

We are all manipulated and also influence others. So that this does not happen to your disadvantage, it is important that you recognize the manipulation and can defend yourself against it. This is unlikely to always work, and particularly skilled manipulators are hard to spot, but there are a few tips and strategies you can use to detect tampering:

Manipulation in the world of work

Manipulation in the sense of influencing takes place everywhere. And of course we also have an interest in working as an employer weighed to make. Seen in this way, we already work with psychological tricks in the job interview. Every employee manipulates constantly in order to be in the best possible position in the job.

Of course, a certain degree of authenticity is required. And yet we know: our facial expressions, how we behave, how we dress, what we say - everything sends signals. It is not for nothing that it is said: Dress for success.

Hence, women who want to hold leadership positions, too shorter hair advised or to wear the long hair in a ponytail or put it up. A direct form of manipulation, as studies show that it creates a better impression.

However, those who rely solely on manipulation will not get very far. Especially since HR professionals have a great knowledge of human nature. Anyone who tries to manipulate with a fake smile is usually quickly exposed. And who is completely different than it actually is corresponds to his nature, in the end is not doing himself a favor because he will not fit into the team.

So it is helpful to know certain tricks to understand how sympathy is created. But one real popular figure you will not become by doing all the tricks one-to-one according to the scheme F. Rather, there must be an inner attitude behind it.

Incidentally, it is also an inner attitude and the knowledge of such tricks, which in turn protects against manipulation, also in private. If you make a new acquaintance and that person is doing psychological tricks like on a program, then you can probably gauge how honest they are with you.