Should I go to ASU or NAU

Rising corona numbers - what to do? 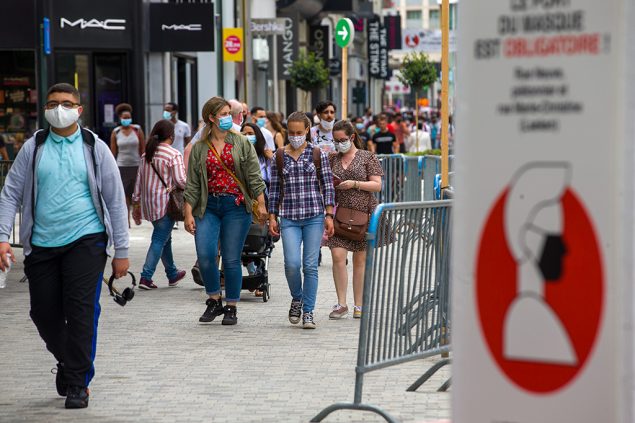 On Sunday, Belgium officially crossed the limit of 100,000 confirmed coronavirus infections. And on average we are well over a thousand cases per day. Not only are the infection curves going up, so are the hospital admissions and the cases for the intensive care units. Older people, who have a significantly higher risk of becoming seriously ill, are also affected more frequently again.

The children have just come home from school with the virus and then infect their parents and grandparents. That was to be expected, according to the virologist Marc Van Ranst in the VRT in the morning. One cannot hope that the virus will be limited to one age group.

In view of the development of the numbers in a video message in the social media, Prime Minister Sophie Wilmès called on the population to respect the protective measures and thus help to avoid stricter conditions. Federal Health Minister Maggie De Block also made a corresponding appeal.

In view of the developments, however, the pressure on politicians to convene the National Security Council again after a long break had grown. The last meeting took place on August 20th. The goal this Wednesday should be, among other things, to move from crisis management to risk management, as Wilmès said. In other words: adapting the measures so that they can be sustainable and efficient.

We have to wait and see what exactly will be decided on Wednesday. Many people are asking for relief. However, the political will to loosen the reins too much seems limited. What could disappear, however, is the so-called "five bubble".

If you make concessions here, you also have to accept that the rules in other areas would have to be tightened. The federal health minister underlined this on Sunday in De Ochtend. If you give the virus more room to act, you have to limit it in other ways, says Maggie De Block.

The virologist Marc Van Ranst believes in more cosmetic changes after the National Security Council. The “five bubble” is a burnt term. But that doesn't change the fact that people's social contacts have to be limited. The chance of the virus spreading between people needs to be reduced in one way or another.

And if the five-man bubble disappears, you just have to come up with another, appropriate measure. Which ultimately came down to the same thing except for the name. Allowing more contacts leads to more cases, that has been seen. It is difficult, uncomfortable and annoying. But you don't have a real choice.

Geert Meyfroidt, professor of intensive care medicine at the University of Leuven, considers the existing measures to be suitable enough in themselves to limit the spread of the virus. He said that in the morning in the VRT. Rather, the problem is people's motivation. Meyfroidt emphasized that people had to be able to follow the rules and understand what it was all about. Instead of talking about tightening or loosening the reins, it may have to be more about how to make the measures more targeted. In order to motivate people, you might have to give them a goal. You need to understand what you are working towards.

He shares this idea with Marc Van Ranst. He pleads, for example, to take countries like Ireland as models. Different phases are defined there depending on the corona numbers. And for each phase it is determined what is allowed or what is no longer allowed. Van Ranst is convinced that when people have a goal in mind, i.e. the prospect that if they behave more responsibly, they will be able to do more in concrete terms, then that motivates them to make an appropriate effort.