The market for nutritional supplements has reached its peak

Casein is the second component of milk protein. At around 80 percent, it is much more represented in terms of quantity than whey protein. In terms of biological value, casein does not come close to the values ​​of lactalbumin. While whey protein has a biological value of 104, casein only has a value of around 75. Casein also differs significantly from whey protein in other properties. For example, it is digested and metabolized much more slowly. After casein has reached the stomach, a kind of gel forms first. This is only slowly digested. The complete digestion of the casein can take up to eight hours or longer, depending on the type and other additives. While whey can be detected in the blood plasma within 30-60 minutes, the amino acid level begins to rise later after consuming casein and only reaches its peak after 3-4 hours, as can be seen in the following figure. This peak in amino acids is also significantly lower compared to that of whey protein. A rapid and strong increase in essential amino acids in the blood, as in lactalbumin, tends to stimulate muscle protein synthesis. Whey protein can therefore be described as an anabolic protein, whereas the casein, which is found in natural foods (mainly cheese and quark), has more anti-catabolic properties due to the slow release of amino acids to the organism. Various studies have shown that the breakdown of muscle proteins during a low-energy diet can be reduced through regular consumption of casein. For this reason, foods containing casein are often recommended before bed.

One reason for the anti-catabolic properties is the high content of glucoplastic amino acids in casein. These amino acids can be used to produce glucose. Due to the slow digestion of casein, they are available for a correspondingly long time and can be used for glucose regeneration, gluconeogenesis, to stabilize the blood sugar level from amino acids. A breakdown of muscle proteins can thus be avoided.

One of these amino acids is glutamine, which will be discussed in more detail in the further course of this lesson and has some important advantages for athletes and health-conscious fitness athletes. Casein is a particularly high-quality source for this, because around 20% of the total protein content of casein is made up of the semi-essential amino acid glutamine. Mainly the two forms of casein are currently on the dietary supplement market Calcium caseinate and miccelares casein to find. These two types of casein differ mainly in how they are made.

The miccelare casein is obtained by microfiltration, a very gentle manufacturing process. This reduces the likelihood of damage to the individual protein fragments. No chemical additives such as acids are required for microfiltration.

Calcium caseinate, on the other hand, is obtained through the use of acids. The advantage here is that you get a very low-fat and low-carbohydrate, almost pure casein product. However, this processing process sometimes leads to denaturation and thus changes in the protein structures.

Denaturation doesn't always have to be bad, however. For example, the denaturation of a chicken egg that is being cooked results in an improved bioavailability of the protein content.

The exact dosage is primarily based on the protein content of the daily diet via conventional foods.

When recommending a casein supplement, it is important to consider the right time. A pure consumption of casein, for example after training, does not do any harm, but it is not ideal for times when the fastest possible protein supply is important. The use of whey protein is more suitable early in the morning or around the training units, whereas casein should always be used when it can be assumed that no proteins will be delivered over a longer period of time, such as shortly before bedtime or before long meal breaks. 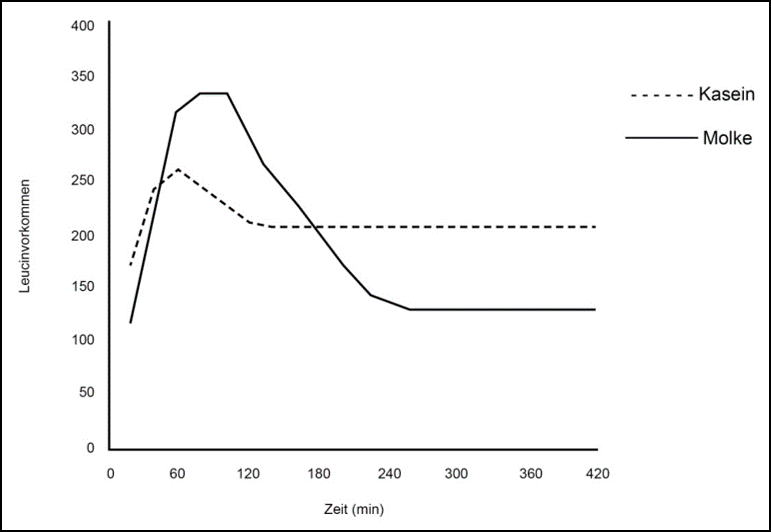 Leucine concentration in the blood after consuming various proteins

Would you like to learn more about this topic? Then we recommend training as a Expert advisor for dietary supplementsthat covers this topic.