As you already know, a lot is different in Japan, not just the language. It is therefore quite logical that the Japanese language version of InDesign must also contain additional functions for more complex typographical features. 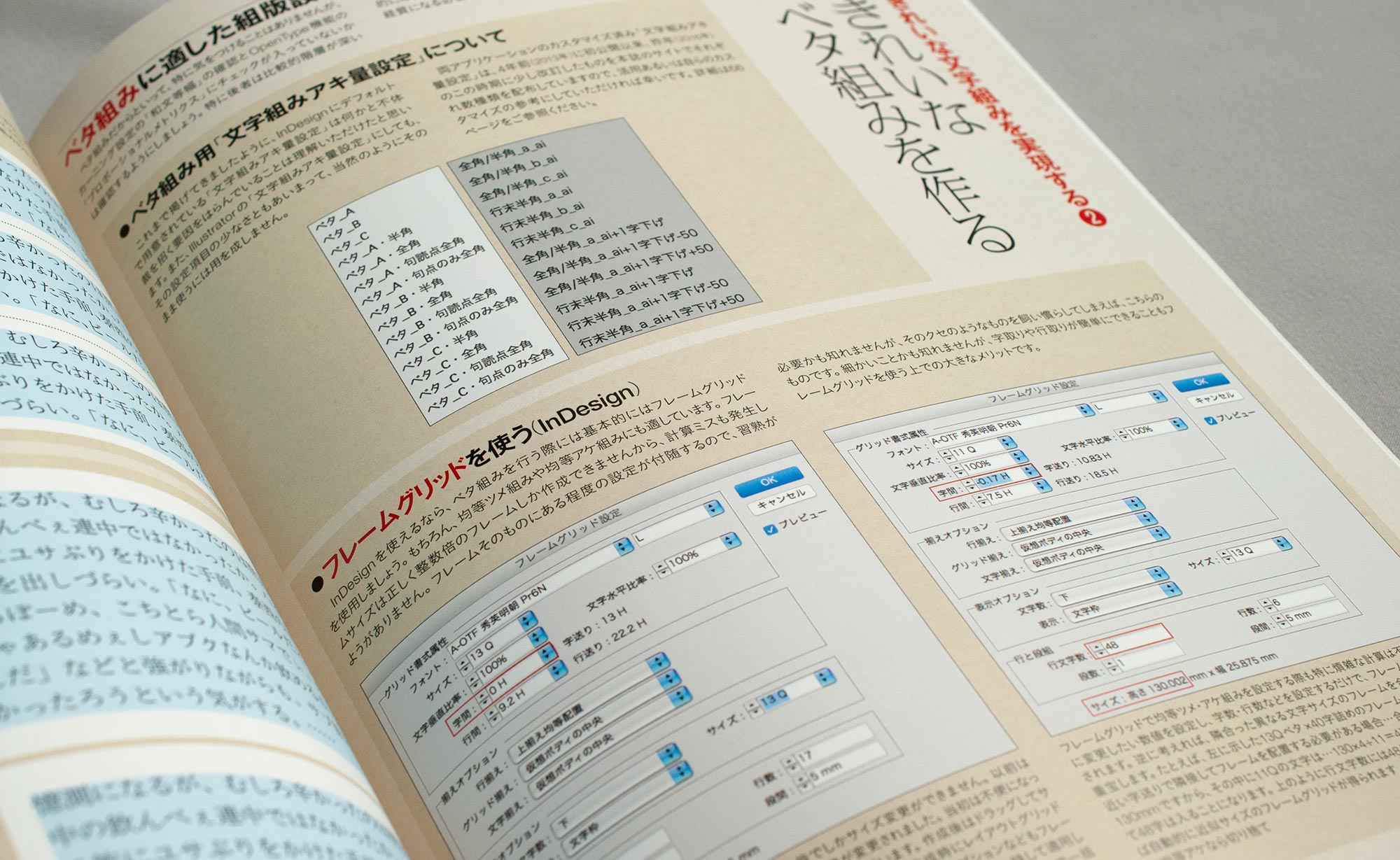 Adobe says, “All versions of InDesign use a common file format. You can therefore open and edit files from a Japanese, Arabic, Chinese or Korean version in a European or Indian version. Conversely, European and Indian versions can be used in the other languages. However, the InDesign version for European languages ​​does not have the typographical features or the layout and frame grids for editing Arabic and Asian texts that are available in the Japanese, Arabic, Chinese and Korean versions. "

Although I haven't seen a "Chinese" or a "Korean" version of InDesign so far, I suspect that it could only be the additional functions for Chinese and Korean that are integrated in the Japanese version (or does someone actually have one a version?).

In any case, it means that the complex Japanese sentence cannot be carried out with the German version, but the exchange of open InDesign files should be guaranteed without further ado. I didn't test it myself, so I can't say to what extent this statement is true. Can complex Ruby characters also be displayed correctly in the German version? - a big question mark.

To list all functions and options at this point would go beyond the scope, and the effort involved would be disproportionate to the benefit anyway. Nonetheless, I've made a little effort so that you can at least get an idea of ​​how different the Japanese software is from yours. 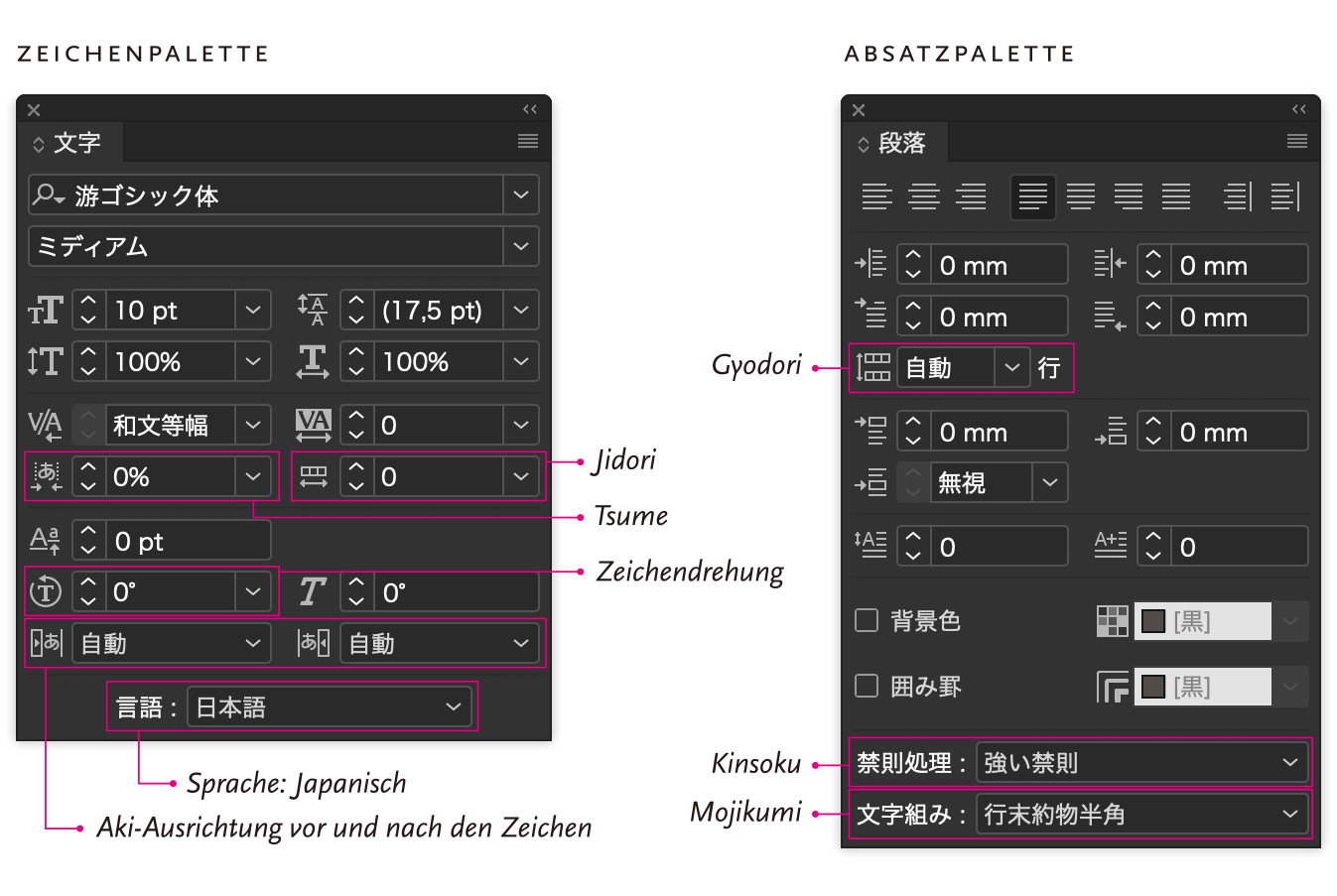 [Character and paragraph palette] The die-hard InDesign user should notice the differences straight away. In any case, the pallets here are larger than normal. 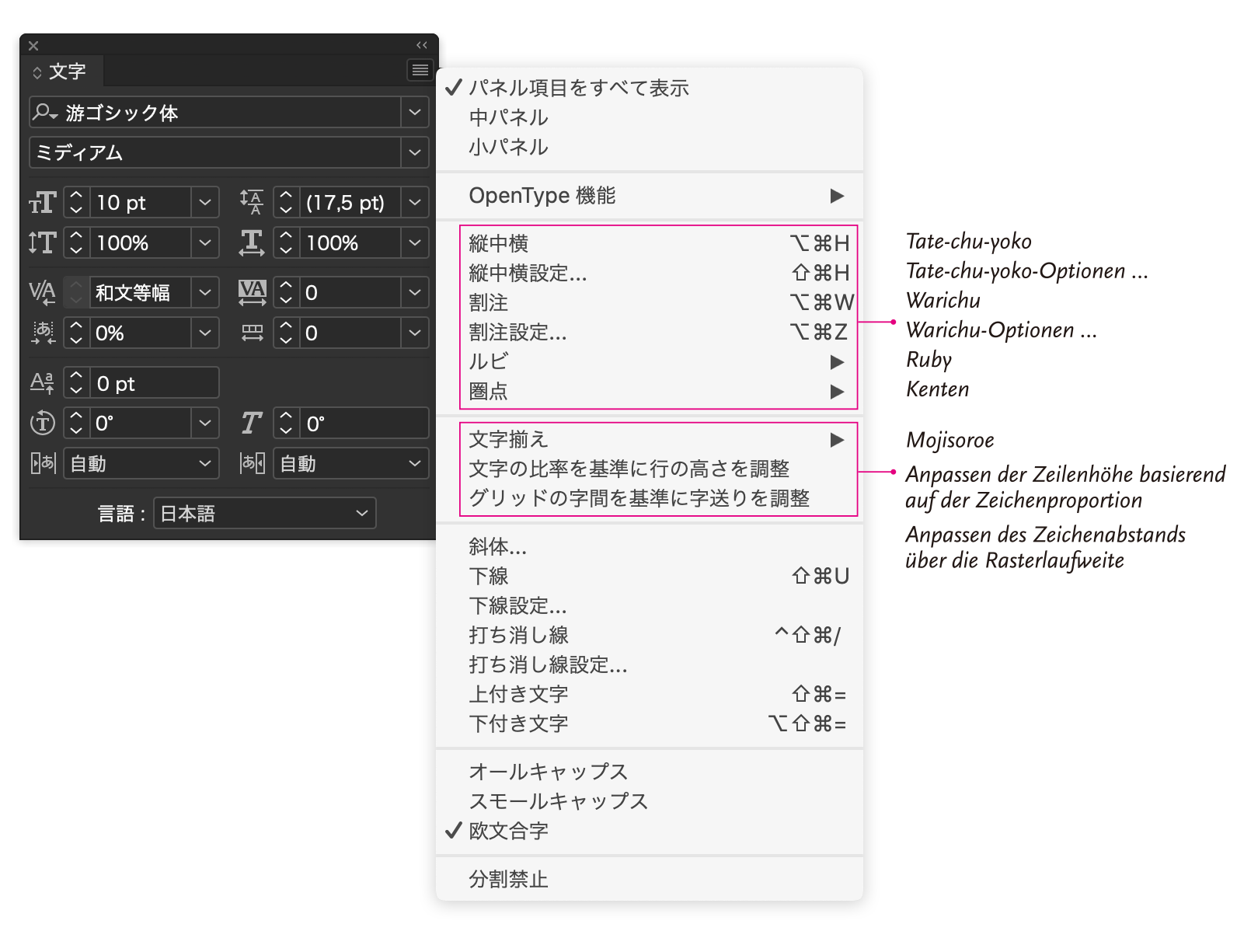 [Options in the character palette] Tate-chu-yoko, Warichu, Ruby, Kenten, Mojisoroe ... These are technical terms, which is why they are usually adopted untranslated as Japanese terminology in the non-Japanese user manual. 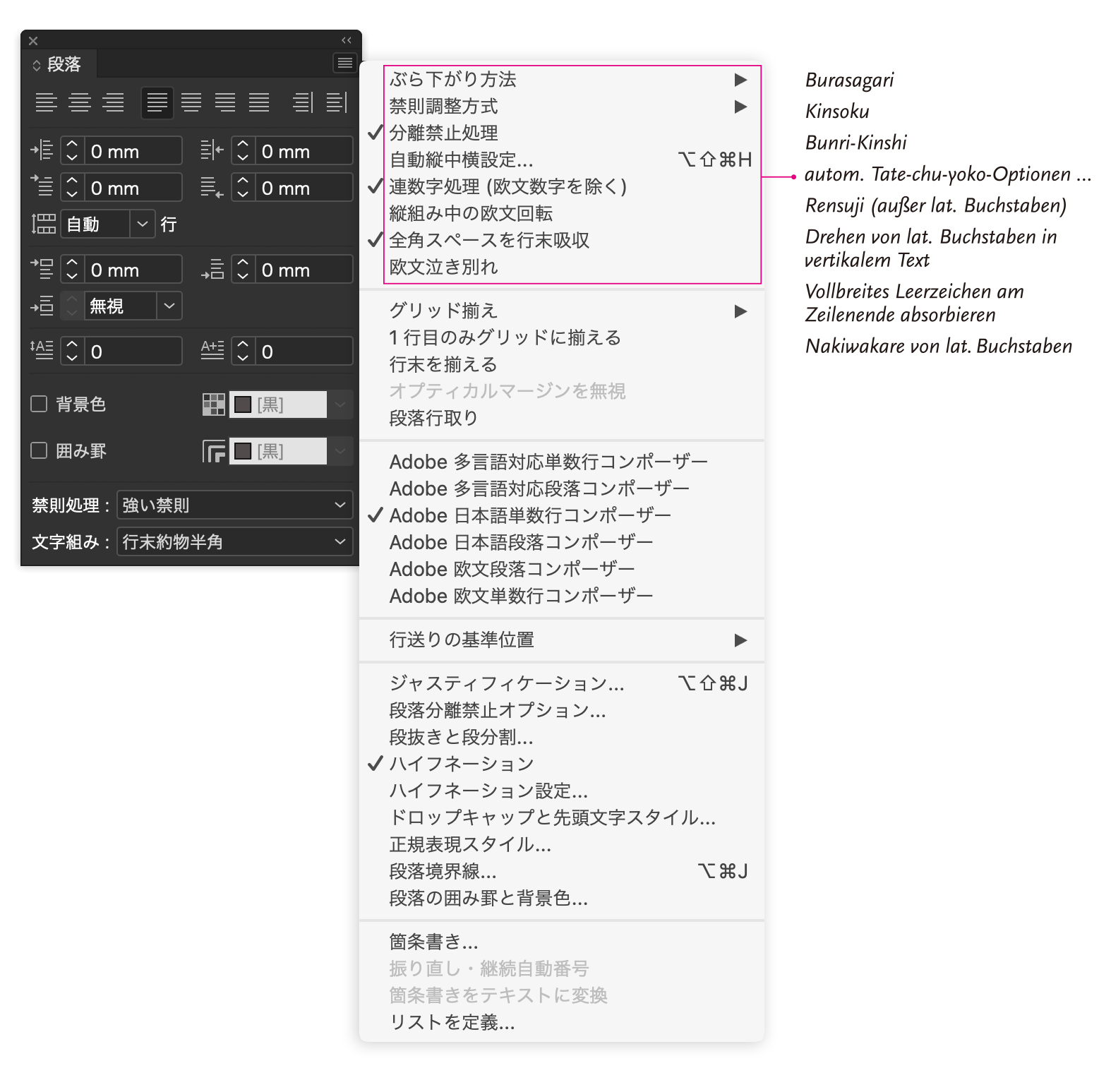 [Options in the Paragraph Palette] Here too, the list of options is longer. Information on Burasagari and Kinsoku can be found on this page below. 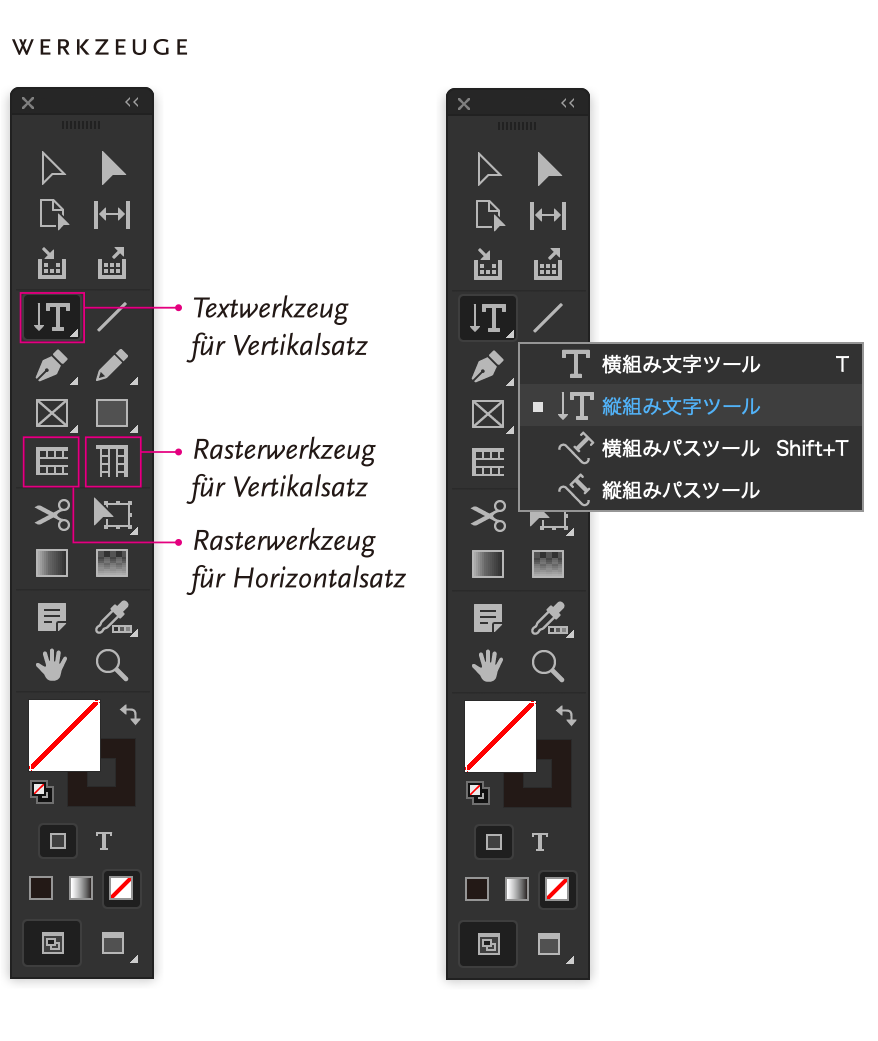 The text tool for the vertical sentence should of course not be missing.

If you are interested, you can read detailed information about each of these functions in German and / or in English at Adobe:

Japanese is predominantly set vertically in print products. All newspapers, most books and magazines are opened from the "back", that is, read from right to left. Japanese also works technically flawlessly horizontally, but for the Japanese vertically set texts are undoubtedly more pleasant to read than horizontally set ones, which is why long and quick-to-read texts such as newspaper articles or novels are almost never set horizontally. The possibility of vertical typesetting is therefore an indispensable part of a typesetting program for Japanese.

[Bund: right] That is unknown in Europe. In the »New Document« window, the Japanese specify the paper size and number of pages as well as the page on which the new document should be bound. 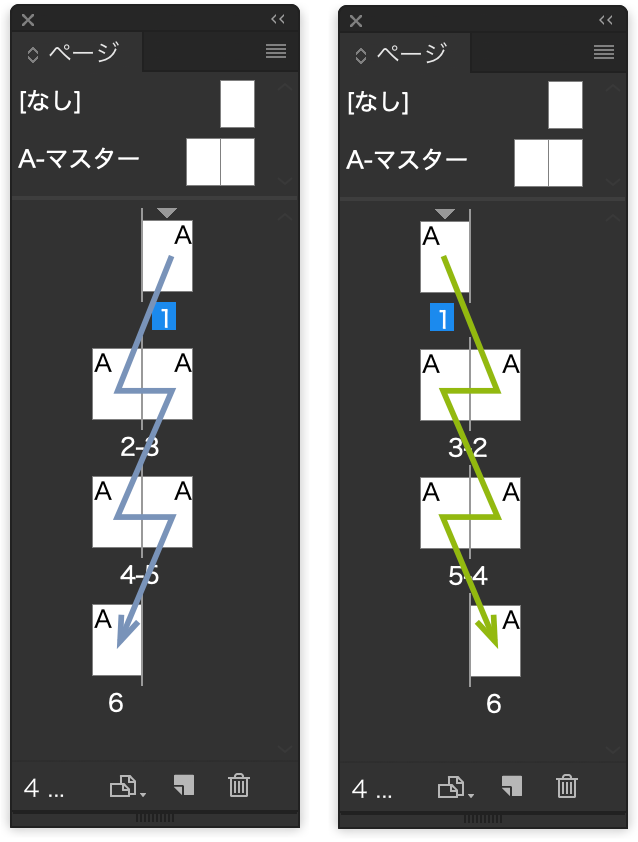 Depending on how the document is opened, the page overview is different. The picture on the left shows the "normal" one with the collar on the left, the one on the right is typically Japanese. When creating the print files from such a special template, it is advisable to consult the responsible printer at an early stage in order to avoid confusion during imposition. 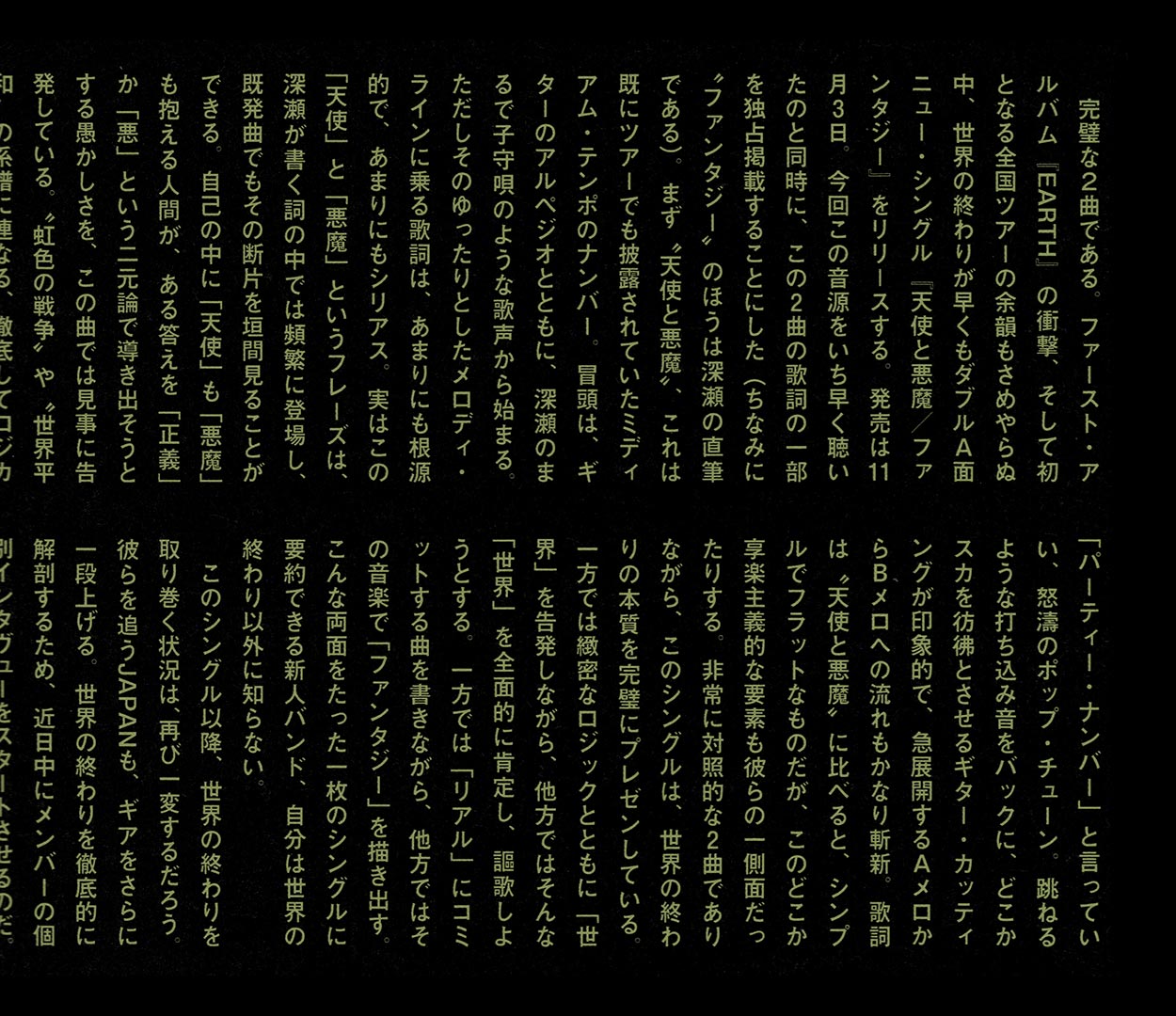 With a few exceptions, Japanese words can be hyphenated anywhere for line breaks. Hyphenation as you know it from your language does not exist in Japanese. In addition, there is no space between words in Japanese. Where there are neither hyphenation nor word joints, no hyphen is used at the end of the line. If there is not enough space at the end of a line for a word written in Latin letters in the Japanese text, it is simply separated - regardless of the spelling of the language concerned. But you can't blame the Japanese for this, that's the way it is there. Personally, however, I know European typography too well to be able to separate a word without a hyphen, which luckily is not forbidden in Japan.

The exceptions mentioned above are certain characters and punctuation, which are not allowed to break. There used to be no binding “rules” for line breaks, but rather “traditional recommendations”, so to speak, that prudent typesetters were happy to adhere to in order to guarantee a pleasant reading flow. This "old wisdom" has been written into the Japanese industry standard JIS (JIS X 4051 - Composition Rules for Japanese Documents) since 1993, and it is now fair to say that there is a "correct" and "incorrect" line break today (You can find more on the subject of line breaks under "Flutter substitution and italics").

Despite the introduction of this standard, the typesetter still has considerable leeway in practice as to which mode he would like to use to break lines. Sentence rules are not traffic rules that you always have to adhere to exactly. In the settings window (picture below) there are two modes for Japanese, one hard and one soft. In hard mode, significantly more characters for which a line break is prohibited are entered by default than in soft mode. 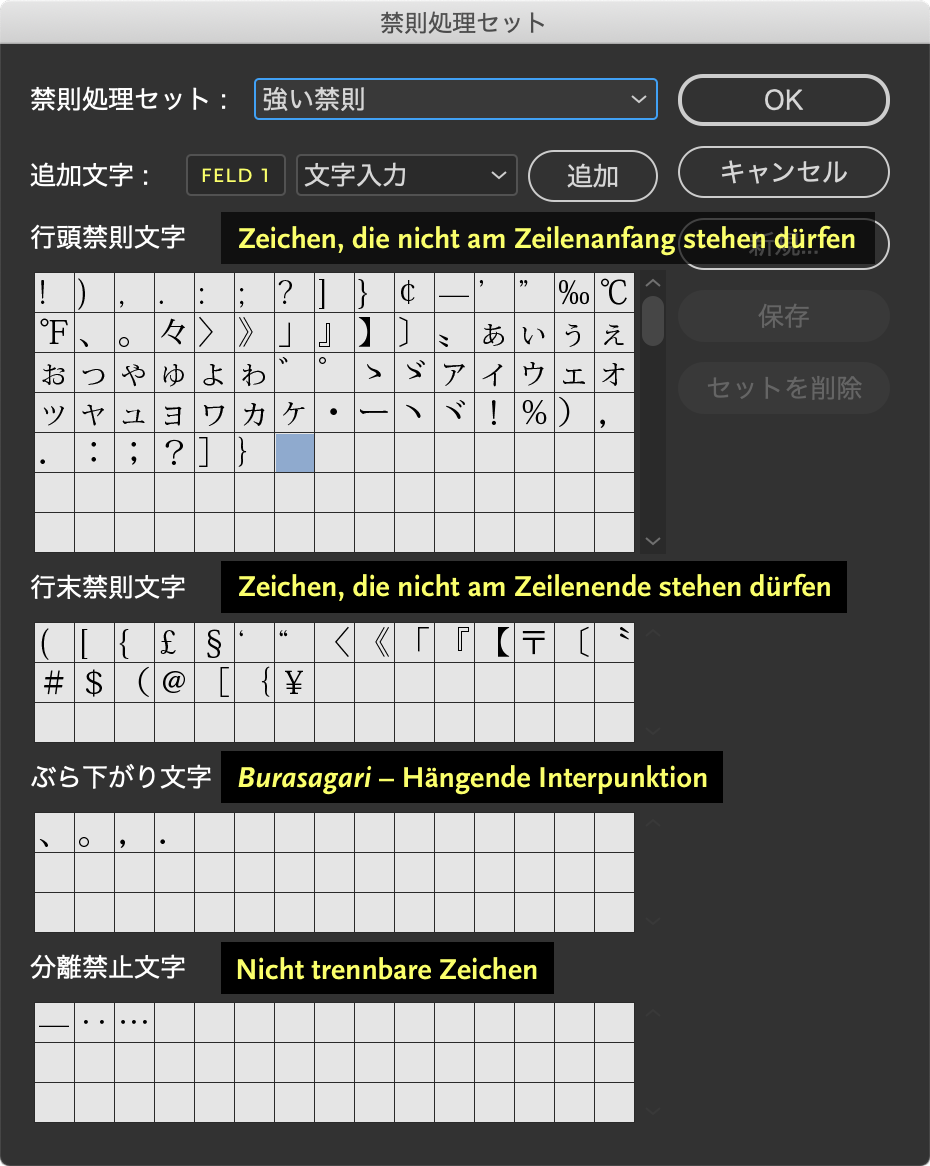 The default settings at a glance: By entering in field 1, any number of additional characters can be added to the list.

You have probably heard the term "hanging punctuation" before. This is actually not a Japanese specialty, because Gutenberg already used protruding hyphens and dots in his 42-line Bible. In Japanese typography, especially during the printing era, this topic played a greater role than in European, because Japanese dots and commas had the same thickness as all other characters, which resulted in much more noticeable gaps at the edge of the paragraph than those that Gutenberg found annoying.

This function has therefore always existed in Japanese typesetting programs and is also used extensively. In Japanese, the technical term for them is "Burasagari". It differs from the similar function »optical margin adjustment«, which is also known in European program versions, in that Burasagari only affects double-byte punctuation marks. 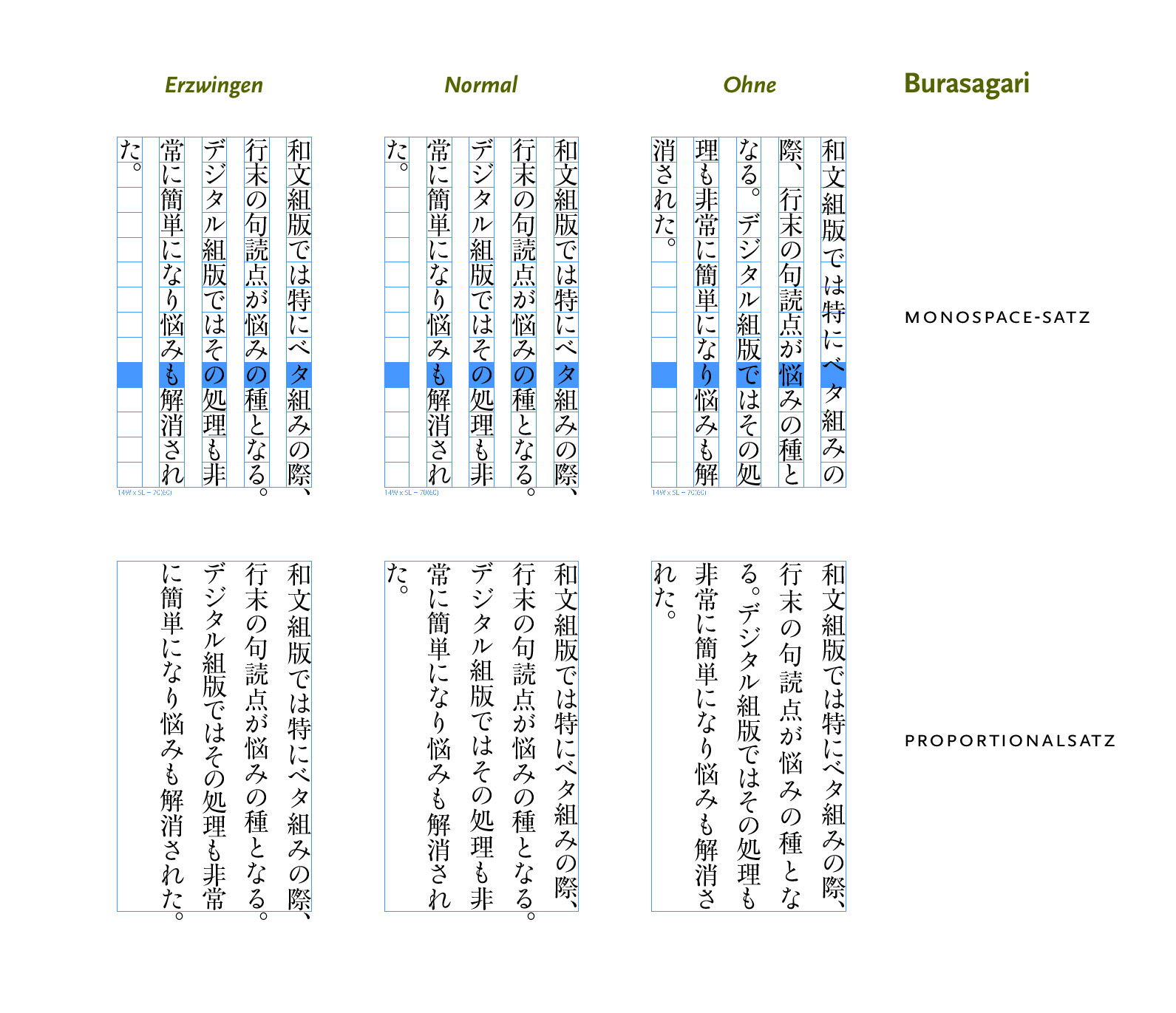 With »none« everyone stays well in the text frame. If the Burasagari function is activated, the chosen ones are allowed to protrude over the edge of the paragraph, if "Force" they must.