Did Jesus really rise from the grave?

It is one of the most famous miracles in the Bible: Moses divides the Red Sea and enables his companions to flee from the Egyptians. However, scientists see it differently. Moses did not split the Red Sea, they say. There were vile, strong easterly winds in the region, which exposed a wide ford for escape.

Another example: the flood. Scientists say that after the end of the last ice age, sea levels rose sharply around the world. The rapid melting of the glaciers broke a land bridge to the Black Sea, which triggered an apocalyptic flood.

Thomas Söding: No, these approaches have a limited scope of explanation.

For example, the subject - Jesus' resurrection from the dead - by definition transcends the boundaries of space and time. Then a scientific explanation also came to an end. But that doesn't mean they should be despised.

Let's take a concrete example: Jesus walking on the water. There are researchers who suspect that Jesus may have been standing on small ice floes that could not be seen from the bank. Warm, salty springs in the water 2000 years ago could have been to blame for this ice, the argument goes. So was walking on the ice just an ice cold trick?

There are even jokes that Jesus supposedly used stones of some kind or took advantage of the morning mist at the Sea of ​​Galilee to make some fake. I don't think so. I think the Bible should be read more carefully. The Bible says that the disciples had a vision on the Sea of ​​Galilee. You saw something. You have had an experience that cannot be traced back to any natural explanation. In the language of the Bible this is what is known as an "appearance".

That is, there is some kind of communication between God and humans. And that is a thing that no medic with medicine or no physicist with physics or no biologist with biology can explain. This is essentially a question of faith. 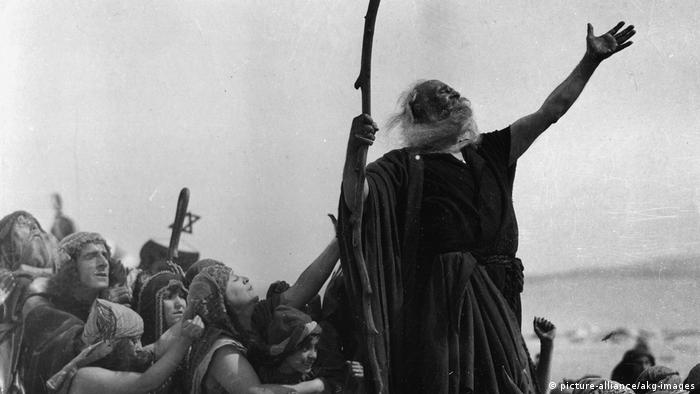 Feature film "The 10 Commandments" (1923): Did Moses split the Red Sea or were there extremely strong easterly winds?

But how do you explain the resurrection?

There were women in Jerusalem who said, "We wanted to go to the tomb and the tomb was empty and we could not explain it to ourselves. But then we were told - by a voice of God - the tomb is empty because Jesus came from the dead is risen ". There were people who thought what the women said was crazy. Afterwards, however, the risen One himself appeared to them. They thought it was a ghost. But then Jesus said: "Look at me carefully. I am Jesus!"

These are these two cornerstones. First, the grave was found empty. There is no natural explanation for this. Second, there are these appearances of the risen One.

This also shows that God did not enter into an alliance with the greatest scholars of the world at that time, but with simple people who had a connection to God. This also makes a lot of sense, because God is at home among people.

Thomas Söding is a professor at the Catholic theological faculty of the Ruhr University Bochum. He is professor of the New Testament.