In the long run, behaviorism proved to be too mechanistic, incomplete and unsuitable for explaining higher mental processes. The predominance of behaviorism was pushed back by the 'cognitive turn' in the 1960s. Human experience and behavior is not within the cognitive theories
- through environmental conditions (behaviorism) or
- through instincts or different personality instances (depth psychology)
explained, but about cognitive processes.

The behaviorists' scientific approach was limited to observing input and output and trying to explain their common occurrence through regularities. Everything that happens in between has been described as a black box, the interior of which is not accessible to observation and therefore cannot be the subject of scientific research.
The subject of research in cognitive science, on the other hand, is the level of mental representation, the level of symbols and ideas that mediate between input and output. Awareness plays the central role in perception, problem-solving through insight and decision-making processes. Human mental activity is understood as a process of information processing that goes through different stages.

The subject of cognitive psychology is the identification of cognitive processes. The Latin word "cognito" means knowledge, knowledge or relating to knowledge. Cognitive processes mean perception, judgment, attention, understanding, problem solving, recognizing, reasoning and learning. The cognitive perspective regards an individual as an information-processing being:

"While behaviorist learning theories focus on the external conditions of learning (triggering of reactions through stimuli or rewards or punishment of behavior through the following consequences), moves forward with cognitive learning theories inner representation the environment in the center of interest. "Edelmann (1996, 8)

"The term cognition relates to all processes of acquisition, organization, storage and application of knowledge. "Mayer (2000, 27, based on Neisser, 1974)

The attempt is made to expose the black box of behaviorism by including cognitive processes as well as inner-mental processes such as ideas, wishes, motives, beliefs, thinking, feeling and wanting.
The sentences "I understand!" or "I thought so!" cannot be explained with behavioristic approaches, or only very inadequately.

The subject of research in cognitive science is the level of mental representation, the level of symbols and ideas that mediate between input and output. Awareness plays the central role in perception, problem solving through insight and decision-making processes.

Particularly those psychological processes (phenomena) that are related to the cognitive process (learning, thinking, perception, language) are examined here. The cognitive processes are viewed as the result of active constructive processing processes in humans. People orientate themselves in the environment not on the basis of "subjective reality", but on the basis of their interpretation of this reality (people take a position on what they see). Human behavior is guided by understanding and insight.

Cognitivism is an attempt at the reconstruction of cognitive structures and the analysis of information processing through which knowledge is acquired, processed, stored and kept accessible. In cognitivism, neural networks are seen as the basis for cognitive performance.

"Most psychologists, including today's psychologists, will unreservedly agree that intelligence has something to do with the ability to solve problems." Rent (1998 b, 223)
Cognitivism studies these problem-solving skills, which consist in processing information.

The origin of cognitivism is seen in German Gestalt psychology (see Lefrancois, 1994, 92). Lefrancois (ibid.) Sees Edward Chace Tolman's system as an important link between behaviorism and cognitivism.
Tolman started from behaviorism and postulated that all behavior is goal-oriented.

Tolman's attempt
Tolman put a rat in a maze in which several paths led to the goal. In this experiment, the rat wanders through the maze until it finally reaches the goal. After several repetitions, the rat seems to be familiar with the maze: it knows the fastest way to the goal and prefers to use it if it is hungry. Up to this point the attempt can be assigned to behaviorism.
After blocking the shortest route, 93% of the rats chose the second shortest route. Based on these observations, Tolman assumed that the animals had developed a 'cognitive map' of their environment (the labyrinth): They could mentally map the labyrinth (in some form).

The following graphic gives an overview of which theories are addressed in this work. However, it does not represent a complete overview of cognitive theories! 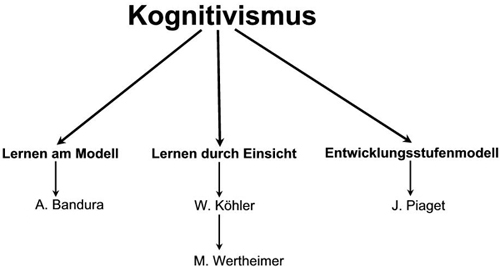 Note: cognitivism vs. constructivism
The cognitive approach is closely related to constructivism. The core message of constructivism is: Individuals do not react to the objective world, but rather depict a subjective reality based on individual constructions and interpretations of the world.
This chapter focuses on cognitivism, which represents an interaction between an external presentation and an internal processing process, i.e. cognitive structures inevitably depend on stimuli from the environment.