What is the Singaporean identity

Hardly any other city unites such a colorful spectrum of peoples as Singapore. Officials like to refer to "a functioning community" in which many very different groups "live in harmony with one another". After the city was founded, many people came to Singapore as a British trading post in search of better living conditions. They came from the southern provinces of China, Indonesia, India, Pakistan, Ceylon (Sri Lanka) and the Middle East. As part of the Singapore population, each of these ethnic groups has retained its own culture and identity over the years, which means that visitors to Singapore can combine their flying visit to the city-state with a trip around the world. Stops are, for example, China, India and Arabia. Here tradition and modernity mix, the cultural roots of the people are alive. And because of the ethnic diversity, you can have a varied selection of epicurean delights. So the world tour in the city-state is also an experience when it comes to food.

About 80 percent of Singapore's residents live in high-rise buildings, ”says Bibi Sakena, Public Relations Executive at the Singapore Tourism Promotion Board. When strolling through Chinatown, you might not really believe that in view of the traditional, 150-year-old district with its two-story buildings. But the first impression is wrong. The Singapore government has invested huge sums in the urban renewal and has had to take a lot of criticism for it.

Some old things got lost when whole streets were lifted. And for many of the former owners of small shops, the rents in the renovated and spruced-up rows of houses should no longer be affordable. Anyone who has not moved to one of the large concrete shopping blocks continues to sell their goods on the roadside, despite all the regulations - even if the city planners do not like to see it and certainly did not want it.

The new splendor of the old quarter is a good example of the change from the old, original to the new, modern Chinatown. This is particularly evident in Tanjong Pagar, one of the oldest parts of the Chinese quarter. The narrow houses, in which several generations once lived under one roof, have become candy-colored boutiques and dazzling souvenir shops with neon advertising and air conditioning. Only the old arcades remain.

You have to look for the old Chinatown in the alleys. However, there you can still watch craftsmen practicing traditional trades such as Chinese calligraphy. By the way, from June 2004 the tradition of the night markets will be revived. There is more about this on the Globetrotter information page on Singapore.

The world tour continues to Little India, a district that still largely presents itself in its typical guise. There is almost nothing of it in the alleys bordering Serangoon Road

to feel the meticulous and penetrating sterility of the city. But Singapore would unjustifiably boast of being the cleanest city if the streets weren't swept clean here too and the waste neatly collected in large bast baskets.

It smells of spices, incense sticks, jasmine and durian, that foul-smelling fruit of the Indian civet tree that looks like a big baseball with bumps, but is supposed to taste delicious. In Little India you meet women in saris, marvel at the magnificent displays of gold and silver shops and hold your nose to pretty jasmine garlands. And if you like, you can have tailor-made clothing made by one of the many tailors. 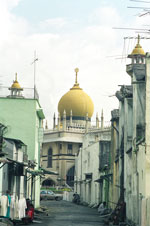 The last stop on the world tour is the land of mosques - the area around Arab Street. A large part of Singapore's Malay population lives here. The minaret of the great Sultan Mosque towers high into the sky. There is a lot of activity in the surrounding shops, just like in an Arab bazaar. Basketry and copper work, prayer rugs and fine fabrics are for sale.

Where many ethnic groups live together, the choice of international cuisine is guaranteed. This is also the case in Singapore. Street vendors and star chefs meet here, the guest can choose from all imaginable types of dishes - from European to exotic. Eating becomes an experience.

How about some traditional Chinese cuisine (Guandong and Cantonese)? Shark fin soup, roasted suckling pig or maybe Dian Xin (steamed or fried appetizers)? Or would you prefer Indian, a fiery banana leaf curry, a vegetarian vegetable meal or a less spicy yoghurt delicacy from Punjab? At least as delicious is what Malay / Indonesian cuisine has to offer: Gado Gado, a salad seasoned with peanut sauce, delicious satay skewers from the charcoal grill or a rice dish with hot, mild curry or a coconut-based sauce. Yes, and then there are several restaurants and snack stands on the east coast where seafood of all kinds is freshly served: crabs, lobsters, stingrays, squids, mussels, oysters and fish in all variations.

More information about the ethnic quarters of Singapore and the cuisine in the city-state is available on the Internet, for example on the official Singapore website at the following address:

Singapore Tourism Board
up