Why are some violins worth millions?

The sound of a Stradivarius is considered by experts to be the ideal of the violin sound. Many violinists dream of playing an instrument made by the Italian master violin maker Antonio Stradivari once in a lifetime. But such valuable instruments - even damaged copies from the hand of the master are worth around one million euros today - are often a great burden for their players.

This article is older than a year.

"Most people find it hard to believe that you just carry something so valuable around with you," said violinist and director of the BBC Symphony Orchestra, Stephen Bryant, to the BBC. He himself, like many of his colleagues, would not lose sight of the violins for a second. Some of the great violinists employ extra staff to supervise the instrument.

The 30-year-old David Garrett, who became famous for his crossover music between classical and rock, plays among other things on a borrowed Stradivarius.

The great responsibility also comes from the fact that many of the Stradivaris are not owned by the musicians, but are on loan from patrons or companies. After all, eight of the 600 or so Stradivarius violins that have been preserved worldwide are owned by the Austrian National Bank (OeNB), which sees it as part of cultural funding to lend the instruments to selected young talents.

With the violin, a musician carries around an irreplaceable work of art almost permanently. “Carry your instrument with you all the time. Make sure it is always in your direct line of sight, ”says the Lark Group, a British insurance company specializing in musical instruments.

Some musicians have had to experience firsthand how important this lesson is. In 1999, the Chinese-American cellist Yo-Yo Ma spent a whole day in fear for his Stradivarius cello, which he got back undamaged thanks to the honesty of a taxi driver. Exactly the same thing happened - also in New York - in 2001 to the American cellist Lynn Harrel and in 2008 to the violinist Philippe Quint.

But not all cases of brief inattention ended so lightly: at the end of 2010, the Korean star violinist Min Jin Kym let her Stradivarius out of sight for a moment to buy a sandwich, and the expensive violin was gone. With her two expensive bows, together worth around 80,000 euros. Although three suspects were arrested at the end of March, the violin and bows are still nowhere to be found, the Daily Mail reported.

No matter how high the auction value of a legally sold Stradivarius, it is difficult to find a buyer, as the British police warned the thieves of Min Jin Kym's violin: “Although these items are extremely valuable, it will be very difficult to get them to sell. They are so rare and have such special features that they can easily be recognized as stolen. "

Some violins have disappeared to this day

Nevertheless, there were some instruments that were stolen and disappeared forever - a total of nine Stradivaris are listed in the database of the Cozio.com website, a portal for string instruments. The violin of Efrem Zimbalist, one of the most famous concert violinists in the world, disappeared in 1960. He recognized the violin called “Lamoreux” years later on a photo in Japan, but it was never found again.

The "Davidoff Morini" was stolen from the apartment of the terminally ill 91-year-old violinist Erica Morini in 1995. The "Colossus" is also said to have been stolen from a private apartment in 1998, but in this case the rumor is circulating that the owner Luigi Alberto Bianchi made it disappear because he was in the war of the roses with his ex-wife.

Years after the theft or loss, other instruments reappeared completely surprisingly at a completely different point on earth: For around 17 years, the "Hercules" disappeared after being kidnapped from an artist's dressing room in St. Petersburg in 1908. The "Duke of Alcantra", who disappeared under unspecified circumstances, was found on the roadside in 1967 by a teacher who kept her and did not tell anyone about it until her death in 1978. 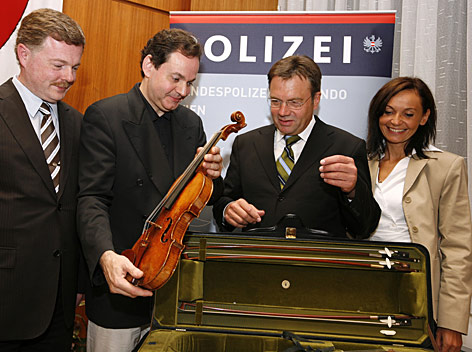 In 2007, when a gang of burglars was arrested in Austria, a Stradivarius was found that had been stolen from the apartment of star violinist Christian Altenburger a few weeks earlier.

Mishaps with the expensive instruments

The young star violinist David Garrett, often dubbed the “most beautiful violinist in the world” by the media, is said to have stumbled after a performance in 2008 and fell on his borrowed Stradivarius “San Lorenzo”, which suffered massive damage in the process, according to several media reports. Garrett denied this a little later, however, saying it was his second instrument, a Guadagnini from 1772.

But even one of the few surviving Stradivarius cellos has had a particularly exciting fate: in 1963, the “Mara” fell into the water in a shipwreck on the Rio de la Plata and broke in the process. Nevertheless, it was able to be reconstructed - today it is played by the Austrian musician and conductor Heinrich Schiff.