What is a feeling 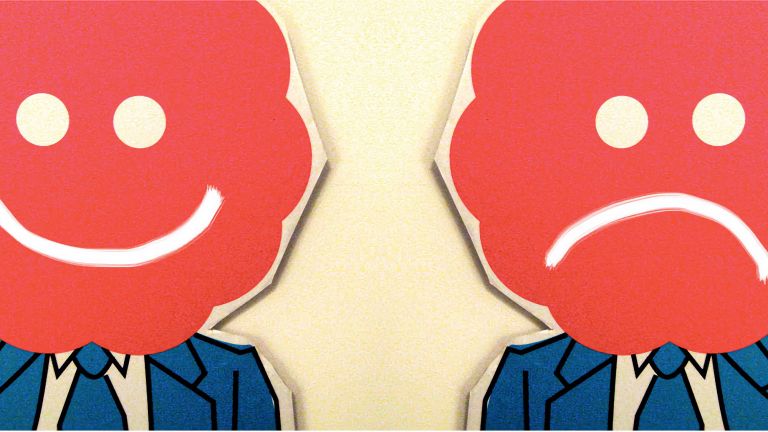 Emotions make life worth living, they are a central part of our soul life. But they are even more: powerful evaluation systems that allow us to automatically assess many situations so that we can react quickly and correctly.

Emotions contain more than the subjective experience of the feeling. They couple physical and mental processes and thus cause us to act.

Who does not know the situation: An important test will begin in a few minutes. You feel tense and nervous. You can't think of anything else, staring at the teacher, who is about to hand out the tasks, going over and over again in your mind what you have memorized. The heart is pounding, the hands are damp. The body is fidgety or paralyzed, maybe you have to suppress the impulse to just get up and walk. And even a bystander who accidentally enters the room would clearly perceive the state of the examinee: the wide eyes, the crouched, tense posture, and possibly the thin, shaky voice.

Exam anxiety is a complex condition. Just like the conscious subjective experience, physical processes and behavioral impulses play a role. And that doesn't just apply to fear. It is typical for all emotions that they couple physical and mental processes, influence people as a whole and, in extreme cases, completely cast a spell over them. This is also reflected in many idioms: We are paralyzed with fear, blush with shame, jump in the air for joy, are blind with anger.

The feeling, i.e. what we consciously experience as fear, joy, anger or sadness, is only the tip of the iceberg. As with the floating ice giants, a lot remains hidden from us when it comes to emotional processes. Because emotions do not only affect the subjective experience, but also include physical reactions to certain triggers, which prepare people for behavior and are intended to motivate them to act. The sight of a snake automatically increases the heart rate and blood pressure, improves the blood supply in the muscles, due to the release of hormones an optimal energy supply for the muscles, directs the concentration on the potential threat and the thinking away from other, currently unimportant things. All of this creates the ideal conditions for two options for action: fight or flight.

An emotion is therefore something very far-reaching, comprehensive. It focuses our attention, influences our thinking skills and our self-assessment - that is, our cognitive processes. It is reflected in body functions such as heart rate, blood pressure and sweating, which are controlled by the autonomic (= autonomous) nervous system and hormones - the physiological components of emotion.

After all, an emotion in facial expressions, gestures, the sound of the voice and behavioral tendencies practically inevitably find its way outwards - we're talking about the expressive and behavioral components here. It is precisely this aspect that is already contained in the term itself: “Emotion” goes back to the Latin words “ex” and “movere” and basically means movement outwards. The subjective component, i.e. the conscious feeling (see: Conscious feelings), often only becomes clear to us afterwards - if at all.

How exactly the individual components are interrelated, what comes first in emotional processes and what is caused by what, has been a focus of science for over a century (see: On the trail of feelings). The most intensely investigated and also the best understood is fear. With this very powerful emotion, we know a lot about the brain areas involved and the underlying neurobiological processes - especially from animal experiments (see: The circuit of fear). However, they have one crucial catch: mice and rats cannot communicate their subjective feelings.

In general, emotions are difficult to grasp for researchers, as complex and varied as they are. Creating them in a controlled manner creates problems, after all not everyone reacts to certain situations in the same way. They are also difficult to measure - even as a person affected, you often feel your emotions only vaguely and can only describe them in that way. Especially when the feelings are not aroused by such clear and striking experiences as unfair treatment, the sight of suffering or the reunion of a loved one after a long separation.

The scientists themselves struggle with the basic terminology. The two emotion researchers James Russell and Ernst Fehr summed this up in a much-quoted sentence: “Everyone knows what an emotion is until asked to give a definition for it.” It is disputed whether there is one, as is the case with flavors, for example there are a certain number of basic emotions from which all others can be put together (see: The roots of feelings). There is disagreement as to how exactly motivations and emotions are related and how they can be distinguished from one another. At least the difference between emotions and moods is consensus: Emotions are comparatively short-lived reactions to an - external or intellectual - cause, moods tend to be longer-lasting, less pronounced states, often without a recognizable trigger.

Despite all the definition difficulties, one thing is clear: emotions bring color into our lives. Not always beautiful and harmonious colors. But if one tries to think of life without them, strictly factual and rational, without feeling and compassion, human existence would be eerily gray, empty and without any meaning. Much of what makes us as persons and our life stories unique would also be lost. The individual emotionality is a crucial part of our personality. And it is precisely the episodes in our past that go hand in hand with strong emotions that have shaped us and make up our identity. Personal experience already shows that you remember your first love better and more vividly than the geography material from the 10th grade. And science can now confirm: Emotional events dig themselves particularly deep into the memory.

Even so, emotions often have a bad reputation. They would confuse sensible considerations, make decisions irrational and people unpredictable, say not only rational people. It is undeniable that a heated argument, for example, often does little to solve the problem or can prevent the test anxiety described at the beginning from bringing what has been learned to bear. On the other hand, emotions have not developed without reason in the course of evolution. They are essential for us to make decisions in the first place and to react appropriately to our environment. Or as Antonio Damasio, neuroscientist at the University of Southern California and probably one of the most famous minds of his craft puts it: "Emotions are not a luxury but a complex aid in the struggle for existence."

It brought about evolution so that we can do things that are essential for survival and pass our genes on to the next generation. To ensure this, emotionally conditioned behavior is associated with pleasant or uncomfortable feelings. Fright reactions, such as jumping back onto the sidewalk when suddenly the horn sounds next to us, can save life. Likewise, disgust, an emotion that has only recently attracted scientific interest, but has been preventing people from touching or eating potentially pathogenic things for thousands of years (see: Research into disgust).

Lust and joy motivate us, show us what it is worthwhile to use our energy and time. People who have damaged parts of the cortex that are important for processing emotions, on the other hand, face almost insoluble problems in front of the wardrobe in the morning. Because how should you decide completely emotionlessly whether to tie the striped or the dotted tie?

Emotions are therefore a powerful system for evaluating situations and for initiating actions. And they are quick: the emotional reaction often takes place before we are even aware of the matter, let alone thought about it. Because emotional circuits in the limbic system can make an initial assessment and prepare appropriate behavior, even before the comparatively slow working higher cortex areas, in which conscious feelings arise, are involved.

After all, emotions also have a central function for social interaction. A large part of our communication happens, albeit often unconsciously, through the transmission of emotions via their expressive components - i.e. via things like facial expressions, gestures, body language and tone of voice. In this way, we can adjust to a counterpart before they have put their concerns into words long and broad, or we can quickly perceive in larger gatherings where important things are going on, where it is worth participating or where there may be danger.

How much depends on this social, communicative component alone, becomes clear from autism. People with this developmental disorder are to a certain extent illiterate in terms of recognizing non-verbal conveyance of emotions. Because they cannot understand the emotional expressions of others, they tend to lead a highly withdrawn life. And that's just one of many emotional disorders that fundamentally affect social, private and professional life.

Another case of emotional experiences that got out of hand is depression - what is meant here is not a temporarily sad mood, but the serious illness that, according to estimates by the World Health Organization, affects one in ten people at some point. Reactions to positive events or positive emotions of others are impaired. The mood spectrum is narrowed, the drive to concentrate is lacking, which is difficult. In severe forms of depression, there is even complete numbness and inner emptiness.

With post-traumatic stress disorder, patients suffer from the fact that extremely emotional events (trauma) are engraved particularly deeply in their memory. That is why those affected relive it again and again later, with consequences such as insomnia, fits of anger or emotional impoverishment. Another example of an impaired emotional experience are anxiety disorders, in which the fear circuit is activated by the most everyday situations, so that the escape and avoidance impulses, which are actually useful for survival, effectively prevent a normal life.

The beautiful and normal examples as well as the possible disturbances show that emotions are not simply another element next to mental, physical and social processes. Rather, emotions permeate all of these areas and interact with them. From decision-making processes to interpersonal interaction to questions of health and well-being - nothing can be satisfactorily explained without them.

Because they are elusive, science has long paid little attention to emotions. However, that changed from around the 1990s, not least due to the development of imaging processes such as functional magnetic resonance imaging . However, the assumption that has existed since the 1930s that there is a delineated neural system that is responsible for processing all emotions does not seem to be confirmed. There are areas like the limbic system that play a key role in emotional processes, but these also take on completely different tasks. Conversely, emotional stimuli activate brain regions such as the hippocampus, which is primarily responsible for memory (see: The circuit of fear). So what you know from your own experience also applies from a neuroscientific perspective: Feelings are a complicated thing.