Biomolecules Lipids are chemical compounds that generally dissolve well in organic solvents and poorly in water. They can contain polar or charged structural elements and form double layers or micelles in water. Natural lipids include, for example, fatty acids, fats, waxes, phospholipids as well as isoprenoids and steroids. They fulfill many vital functions in the body. In pharmacy, lipids are used, among other things, for the production of drugs, as active ingredients and auxiliaries and as food supplements. Structure and properties

Lipids are characterized by the fact that they are soluble in organic (non-polar) solvents and generally sparingly or insoluble in water. They have lipophilic (fat-loving, water-repellent) properties.

There are also lipids with polar structural elements such as phospholipids or ionized fatty acids. They are called amphiphilic and can form lipid bilayers, liposomes and micelles. For example, the soaps in an aqueous solution lock in fats inside and have a cleansing effect.

Lipids usually have a high proportion of aliphatic or cyclic hydrocarbons.

They are natural substances that occur in all living things and, like carbohydrates, proteins or nucleic acids, are counted among the biomolecules. Humans cannot produce all lipids themselves. For example, some fatty acids and vitamins must be ingested with food. Lipids are also made artificially.

Lipids can be classified according to saponifiability, i.e. whether they can be hydrolyzed with a strong base such as sodium hydroxide (NaOH). The saponifiable lipids include, for example, fats and fatty oils, while many steroids and carotenoids are unsaponifiable.

Structurally, very different groups of substances are counted among the natural lipids. In contrast to other biomolecules, they do not have a uniform structure:

These groups also include the fat-soluble vitamins (A, D, E and K). 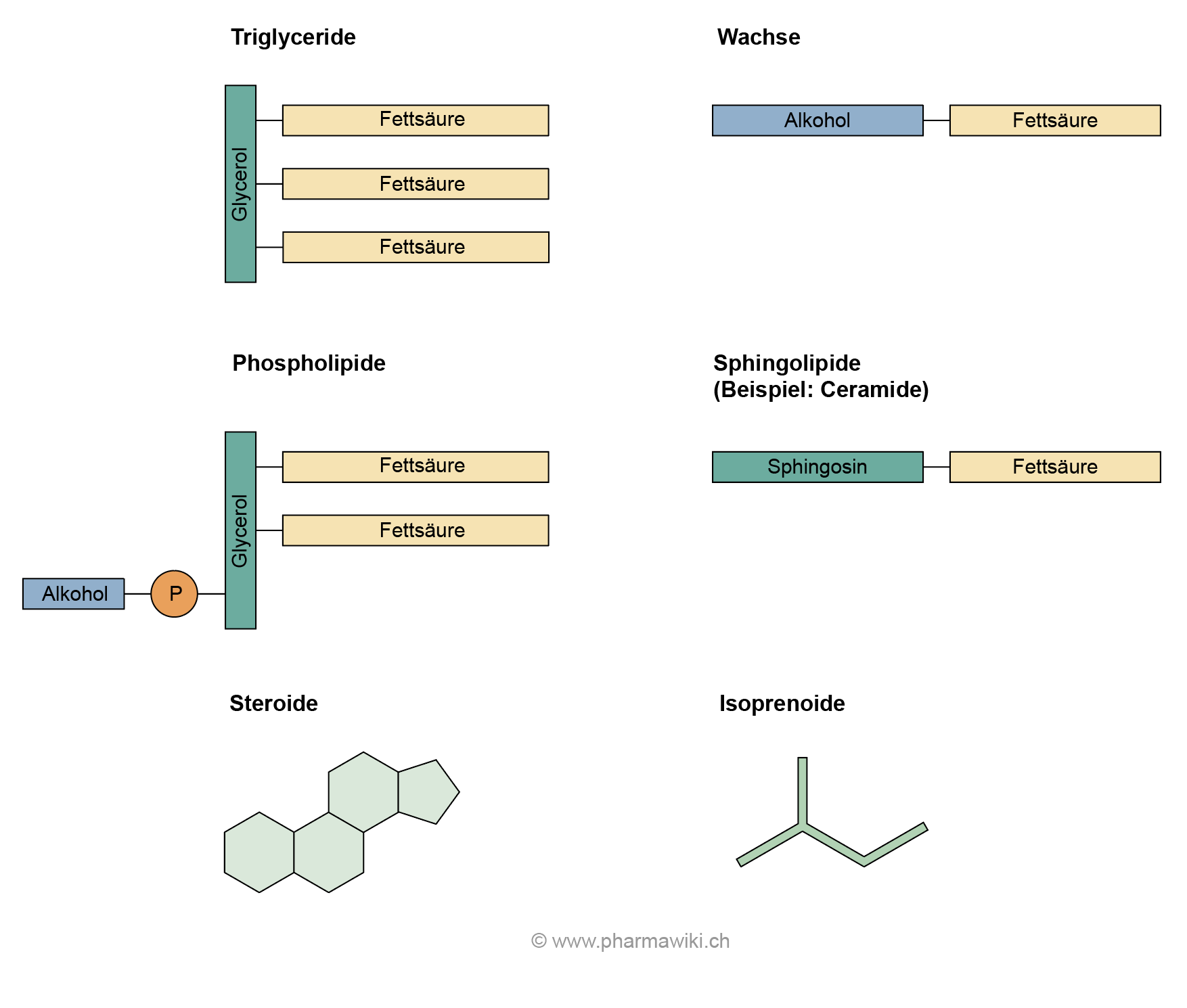 Lipids have numerous vital functions in the human body. Among other things, they are used for storing energy (triglycerides, fatty acids), for heat insulation, for building cell membranes (phospholipids, cholesterol, sphingolipids), as antioxidants (cartotinoids), for metabolism (vitamins), for signal transmission and communication (Steroids) and needed as protection against harmful influences.

“Fats” have a bad reputation and are considered unhealthy by the public. However, this only applies to excessive and improper intake. Lipids are essential and fulfill vital functions in the body.

Conflicts of Interest: None / Independent. The author has no relationships with the manufacturers and is not involved in the sale of the products mentioned.

Our online advice service PharmaWiki Answers will be happy to answer your questions about medication.

Support PharmaWiki with a donation!

© PharmaWiki 2007-2021 - PharmaWiki provides independent and reliable information about medication and health.
This article was last changed on September 17, 2019.
Imprint and data protection declaration
Show products for this page
<?