Which countries consider themselves the third Rome

The keyhole of Rome on the Aventine Hill: a nice surprise!

What is the keyhole of Rome? And where do you find it? Hours can be spent enumerating the many attractions Rome has to offer. Over 4000 years of history as a center of the world leave their mark. While you can spend days exploring the postcard motifs of the Italian capital, it can sometimes be worthwhile to venture off the beaten track. The Aventine Hill is an example of a successful excursion destination in the capital. It can only be seen on a few postcards and in fact there are far fewer tourists here than at the Spanish Steps, for example. This part of Rome captivates with its special beauty and with a secret: a small keyhole ... And if you look through it, you will be rewarded with one of the most beautiful views over Rome!

The Aventine Hill and its Orange Gardens

The exploration of the Aventine hill and the keyhole begins with a short ascent from the bus station "Aventino" ...

The seven hills of Rome are known all over the world. Not all of the hills get the same attention from visitors to the city, however. The Aventine Hill is still an insider tip in Rome today. This is where the rich and beautiful of Rome have settled, maintain their villas and wonderful gardens.

The area is dominated by the Order of Malta, which has its official residence here. The old monastery of the order is still the seat of this global organization. If you leave the beautiful sites next to you and move a little along the paths with the great trees and the wonderful view over Rome, you will inevitably end up at the Giardino degli aranci. 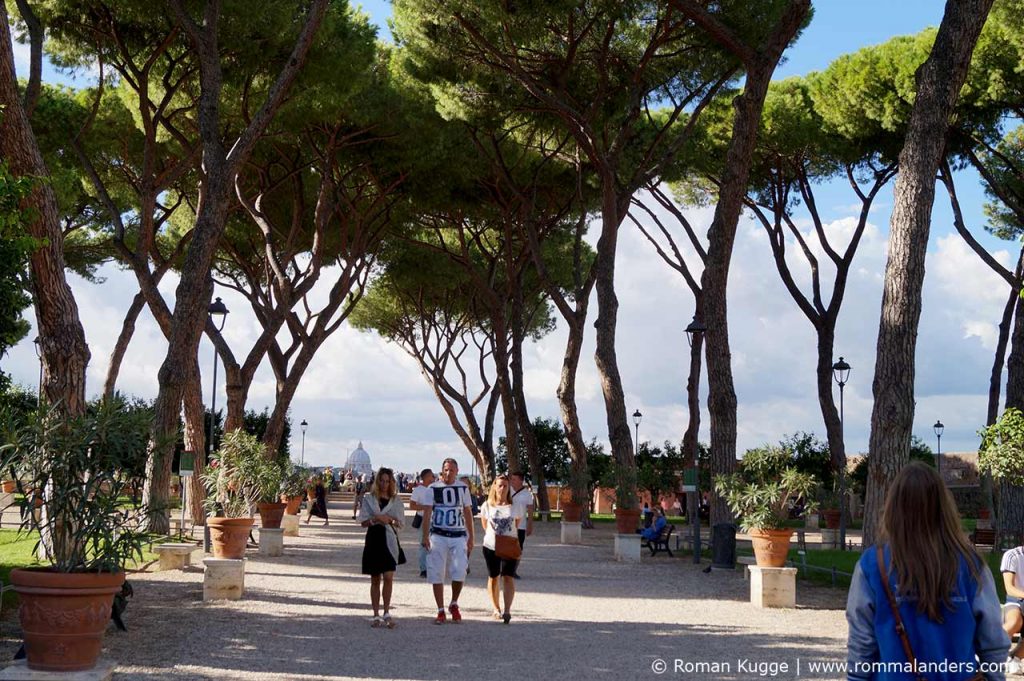 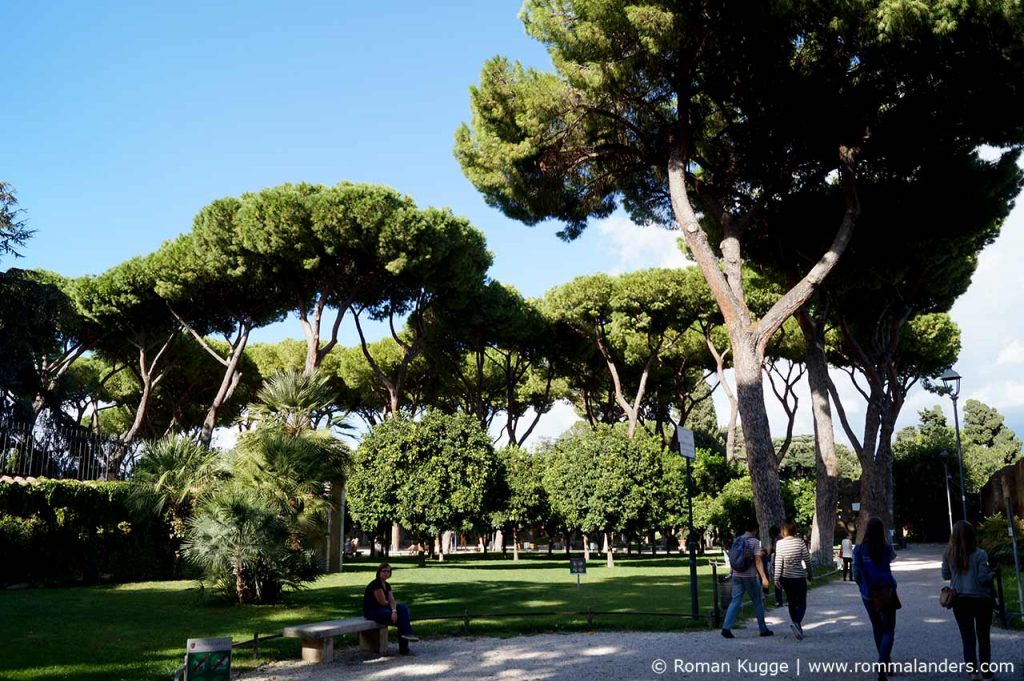 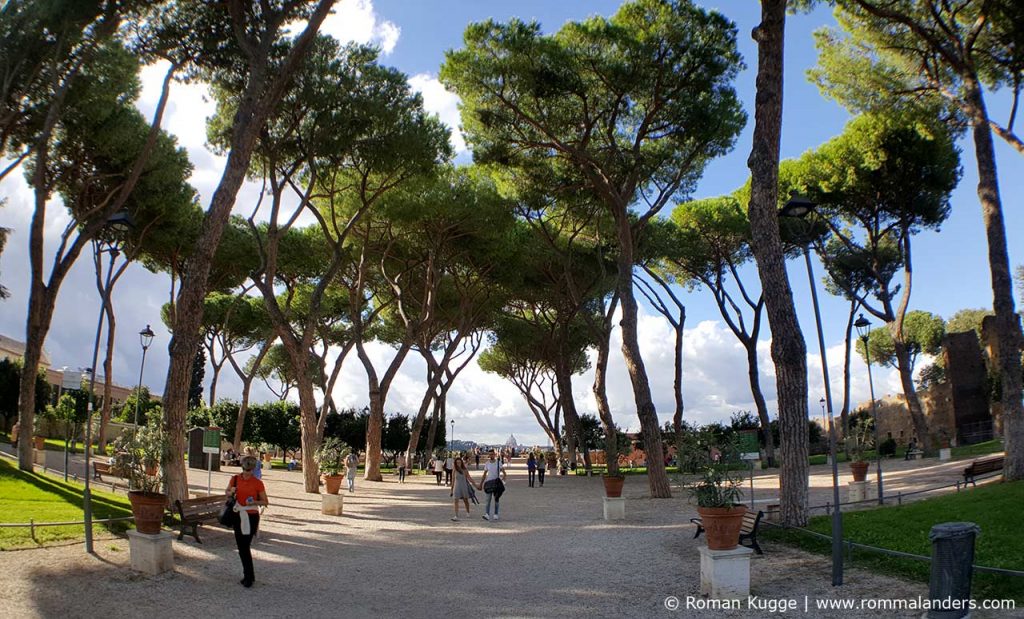 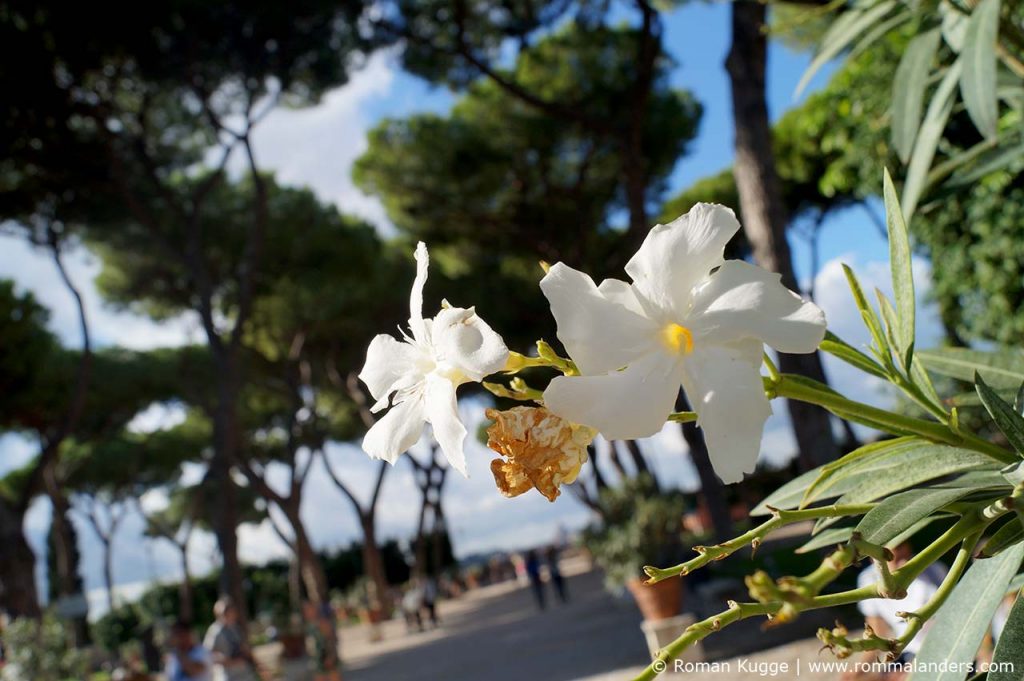 The orange garden got its name from the orange trees that bear their refreshing fruit here, especially in the spring and summer months. Along the trees, which have been in bloom here since the 1930s, there is a unique view of the city. You also have the advantage that there are not as many visitors here as in other parts of Rome. This special district of the city can therefore also score with the fact that you can enjoy a little peace and quiet in hectic Rome. Here, too, there is a small historical highlight: Basilica di Santa Sabina. This Roman church, which was built in the 5th century, is one of the oldest products of the Christian faith in the Eternal City. 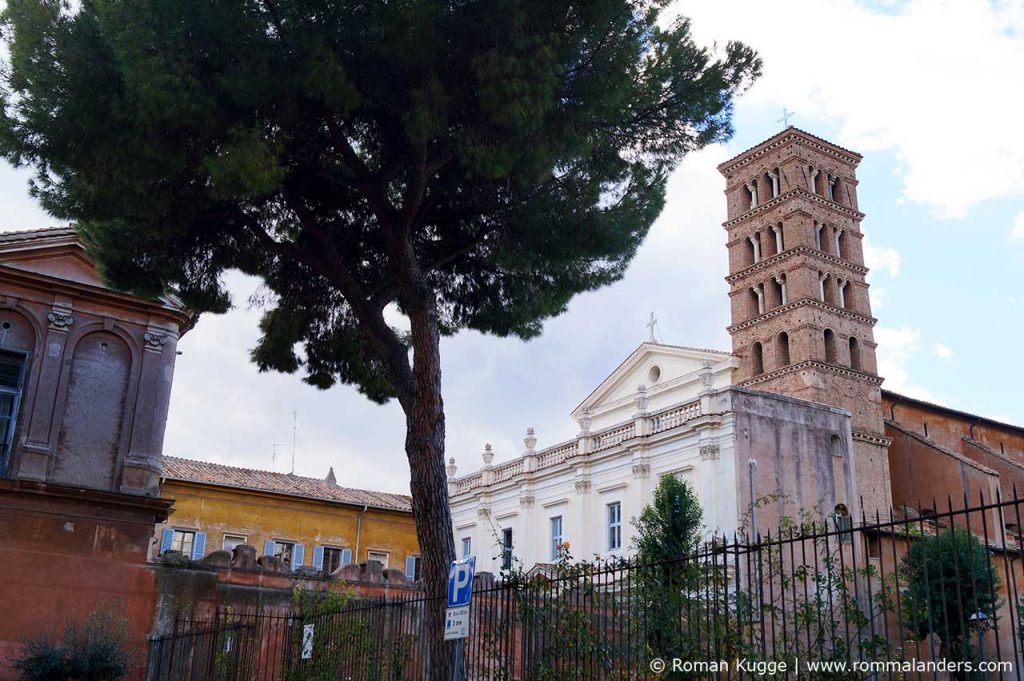 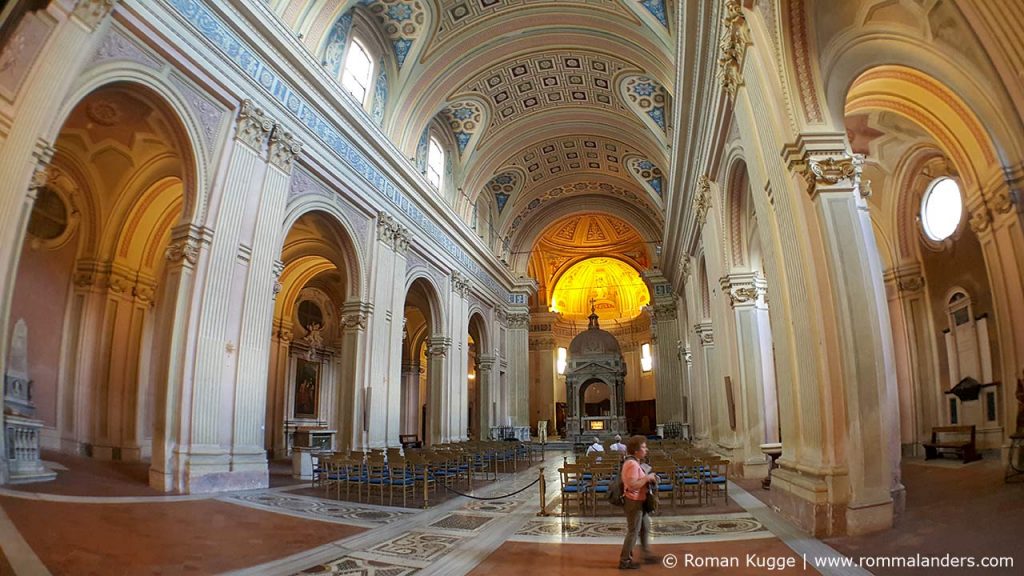 When you have left the gardens behind you, you walk along Via di Santa Sabina and will probably meet significantly more tourists here for the first time. The reason for this is probably the most famous keyhole in the world.

The views from the keyhole and Aventine in Rome

As already mentioned, you are already blessed with a wonderful view in the orange gardens. From here you can look far over the Eternal City, see the Vatican and the “typewriter of Rome” in the distance and also get an impression of why the rich and famous of Rome prefer this area.

In general, it is worth looking to the left and to the right when walking through the district. Even behind the high walls you can see how many beautiful villas have been built in this area over the centuries and especially in modern times. Modern architecture tastefully adapts to the ancient sanctuaries of the Order of Malta. And that's exactly what the goal should be if you want to experience the famous keyhole and the view through it.

The message of the Order of Malta can be found in the Piazza dei cavalieri di malta. It is not just the Vatican that is subject to its own jurisdiction in Rome. Here it is also the order that has its own legal representation and can determine its own fate. The fact that the embassy exists is lucky for the tourists, because something was created here that is one of Rome's insider tips. There is a small keyhole at the green gate. While there aren't many tourists in this area, this is one of the only snakes you can find in this area. The reason lies in the view you get when you look through the hole.

The view allows you to see three countries in the middle of Rome. The autonomous areas of the Malters, the Vatican State with the dome of St. Peter's Basilica and Rome itself. The view is considered to be one of the most beautiful features that you can discover by the way. The special perspective makes it seem as if you could almost touch St. Peter's Basilica. Whether this was intended by the client or not is a well-kept secret of the Malters to this day, who simply tolerate visitors to their message.

A visit to the Aventine Hill can also be worthwhile. Those who are not interested in the keyhole will at least find some great gardens and a wonderful view of the city.

Waiting times at the keyhole

At the beginning of the 2000s you could go up to the keyhole and look at the view in peace. At that time, the keyhole was still a real insider tip, even among the Romans.

Unfortunately, things look a little different today. Don't worry, you won't have to queue for three hours like at the Vatican Museums if you don't have tickets. But you are guaranteed to meet a few onlookers. I've been to the keyhole several times and there are usually 10-15 people in line. The pictures here are from the month of August, so it's still full high season!

The queue goes on very quickly (5-10 minutes), even if everyone naturally wants to look through the keyhole and then tries to take a small photo!

If you want to be all alone, you should stop by here in the evening after 9 pm ... Then you will have one of the most beautiful views of Rome for yourself!

Photo tip for the keyhole 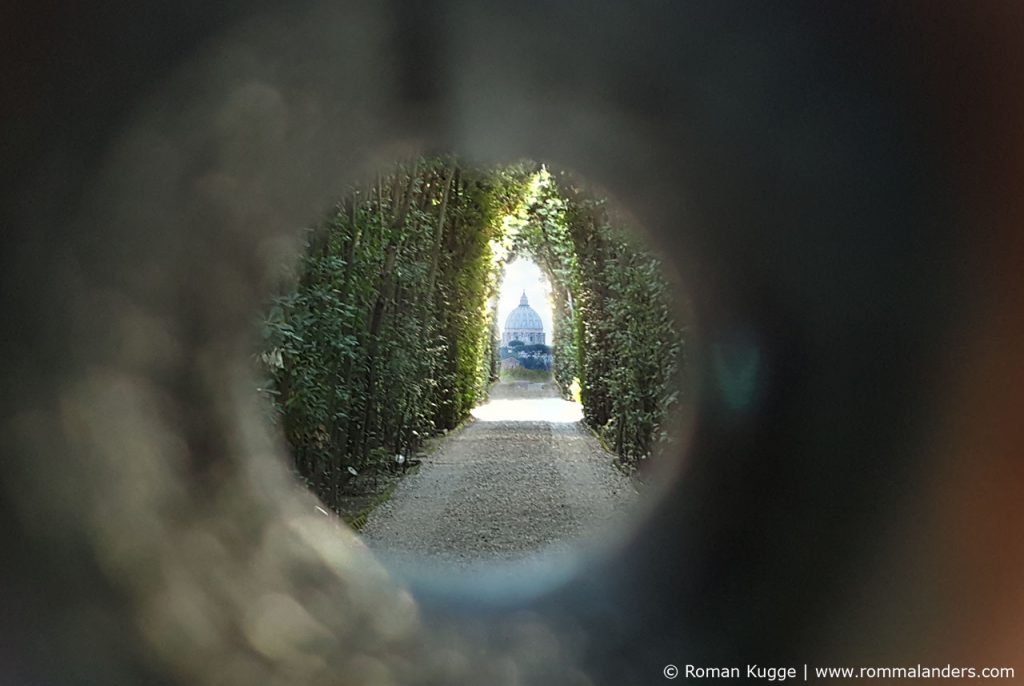 To be completely honest: It's really difficult to get a good photo here. You don't want to spend hours trying, especially since other visitors are waiting and want to take a look through the keyhole.

My advice: Set your camera to manual, otherwise the machine cannot decide between the dark lighting conditions in the keyhole and the bright St. Peter's Basilica. You should focus on "infinite" and the aperture as in daylight. After all, you want St. Peter's Basilica to appear sharp and properly lit in the distance, and not the keyhole!

Try out all the cameras you have with you. Some cope with the lighting conditions better than others. I first took a photo with my two cameras, looked at the result, tweaked the settings, and then got back in line to get a great snapshot. But probably only photographers and bloggers are that freaky 🙂

The alternative: If you come here late at night, then you are all alone and can make your settings in peace.

24/7 and for free! The keyhole is located in a public square that is accessible at all times and for which, of course, no entry is required.

How do I get to the keyhole of Rome?

The Aventine Hill is not quite in the center of the capital, but also not far to the south. The exact address is: Piazza dei Cavalieri di Malta, 3, 00153 Roma. The orange garden "Giardini degli Aranci" and the church "Basilica di Santa Sabina all’Aventino" are right next to it.

We recommend arriving by bus (lines 23, 180 or N10) and getting off at the “Aventino” stop. From there it is about 500 meters on foot up the hill to the keyhole.

A little easier to get to, but also a little further away: The metro station “Circo Massimo” (on line B). From there it is about 800 meters and you will pass the large field of the Circus Maximus!