Cocaine was used in surgery

Local anesthetics Cocaine is an alkaloid found in the leaves of the coca bush Erythroxylum coca. It was used primarily as a local anesthetic in the past. At present, there are no longer any drugs containing cocaine on the market in Switzerland; the corresponding preparations must be made in a pharmacy. Because of its stimulating and euphoric effects, cocaine is mainly abused as an intoxicant. As such, it leads to numerous undesirable effects and addiction.

In Switzerland there are currently no more finished medicinal products containing cocaine on the market. However, they can be prepared as a magistral prescription in a pharmacy. Cocaine is subject to the Narcotics Act and requires a more stringent prescription, but is not prohibited as a medicinal product. It is also sold on the black market as an illegal intoxicant, often stretched and contaminated.

In 2020, the nasal solution Numbrino® with cocaine hydrochloride was approved as a local anesthetic for the nasal mucosa in the USA. The drug is intended for diagnostic and surgical uses.

Cocaine (C.17H21NO4, Mr = 303.4 g / mol), like the alkaloids of the nightshade family, belongs to the tropane alkaloids. Cocaine hydrochloride is a white, crystalline powder or colorless crystals. It is very easily soluble in water and easily soluble in ethanol 96%. It melts at 197 ° C with decomposition. 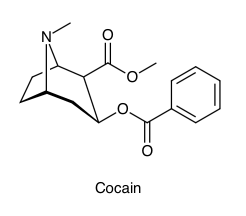 Cocaine is a natural substance that comes from the → leaves of the coca bushErythroxylum sp. (Family Erythroxylaceae) is obtained. The medicinal drug is called Cocae folium (coca leaf). The coca bush is native to South America. See also under → Coca leaves.

Cocaine is mainly produced illegally in South America, including Peru, Colombia, Ecuador and Bolivia. To do this, the leaves are extracted with a solvent (kerosene) and hydrochloric acid. The end product is usually the salt cocaine hydrochloride.

"Some laboratory animals, if given a choice, will ignore food and keep taking cocaine until they starve" (Nestler, 2005)

The effects come on quickly and usually only last for a short time. Cocaine has a short half-life of around 1.5 hours.

The dopaminergic effect of cocaine on the nucleus accumbens of the limbic system seems to be of central importance for euphoria and the arousal of addiction. Cocaine induces a high and a strong memory of how it came about (people, places, associated things). This leads to a strong desire and later an obligation to repeat the intake. Cocaine increases the concentration of neurotransmitters in the synaptic cleft by inhibiting their reuptake (e.g. dopamine, norepinephrine, serotonin).

For local anesthesia and vasoconstriction, for example of the nasal mucosa.

As a stimulant intoxicant, stimulant, party drug and smart drug.

Cocaine can be snorted, injected or taken orally as an intoxicant. It is well absorbed through the mucous membranes. It can also be smoked, but not as cocaine hydrochloride, as this decomposes when heated. To do this, it must first be converted into the free base by deprotonation (crack or freebase, see above). Due to the short duration of action, the application is often repeated. Cocaine is often combined with other intoxicants, such as alcohol or heroin.

Conflicts of Interest: None / Independent. The author has no relationships with the manufacturers and is not involved in the sale of the products mentioned.

Our online advice service PharmaWiki Answers will be happy to answer your questions about medication.

Support PharmaWiki with a donation!

© PharmaWiki 2007-2021 - PharmaWiki provides independent and reliable information about medication and health.
This article was last changed on February 20, 2021.
Imprint and data protection declaration
Show products for this page
<?