How can microorganisms be used

Microorganisms, like bacteria, are microscopic living things. They are common in food. Sometimes they are desired there and are used to preserve the food. Microorganisms in food that cause disease in humans or that are capable of causing food to spoil are undesirable. Food is often contaminated with undesirable microorganisms during production or storage. 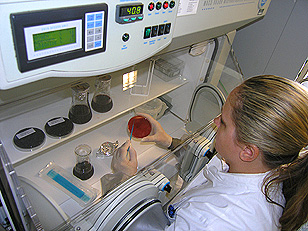 Some of the microorganisms found in food, so-called pathogenic germs, are able to cause infections after consuming the contaminated food. Bacteria, like Salmonella, Germs of the genus Campylobacter, intestinal pathogensEscherichia coli and Yersinia enterocolitica are pathogens of Food infections known. These germs, too Zoonotic agents called, often occur in livestock populations without the animals (e.g. cattle, pigs, poultry) becoming sick themselves. When the food is obtained, the bacteria can then be transferred to the food. They are therefore particularly common in Food of animal originsuch as meat and eggs. But alsoplant-based foods, like vegetables and salads, are increasingly identified as sources of food infections. In humans, these germs lead to intestinal diseases. In the course of the disease, serious complications and life-threatening situations can arise. Small children, the elderly and people with weakened immune systems are particularly at risk.

Listeriosis, which manifests itself with flu-like symptoms and can lead to purulent meningitis, is also one of the food infections. Your pathogen, Listeria monocytogenes, is mainly consumed with contaminated food. Here, too, primarily immune-weakened people fall ill, especially newborns, old people, chronically ill people, transplant recipients and pregnant women. A third of people who develop listerial meningitis die from the disease.

Yet another group of bacteria forms substances when they multiply in food, which have a toxic effect on the human organism. It comes to the so-called Food intoxication. Those of certain Staphylococcus aureusEnterotoxins formed from strains cause vomiting. Also the toxins from Clostridium perfringens and Bacillus cereus cause intestinal disease and vomiting.

The neurotoxins of Clostridium botulinum are among the strongest known poisons. They damage the nerve tissue and lead to the dreaded botulism. Symptoms of paralysis occur with serious consequences.

Unwanted microorganisms in food also lead to Spoilage. The metabolic activity of the germs causes sensory deviations in the food. For example, rotten meat has gray-green discoloration, greasy surfaces and a putrid smell.

To check the hygiene Certain marker organisms are detected during the production, storage and distribution of food. So Escherichia coli is suitable to indicate a potential health risk from pathogens. However, the detection of bacteria from the enterobacteriaceae group is also an important indicator of inadequate hygiene.

In food production, food is made safe and durable by killing undesirable microorganisms through heat treatment or by preventing their reproduction through other technological processes. Freezing and cooling can prevent the germs from multiplying. Drying, salting or acidifying also contribute to preservation. In fermentation, for example of yoghurt or salami, even desired microorganisms are used as starter cultures.