Who is Matt Bevin 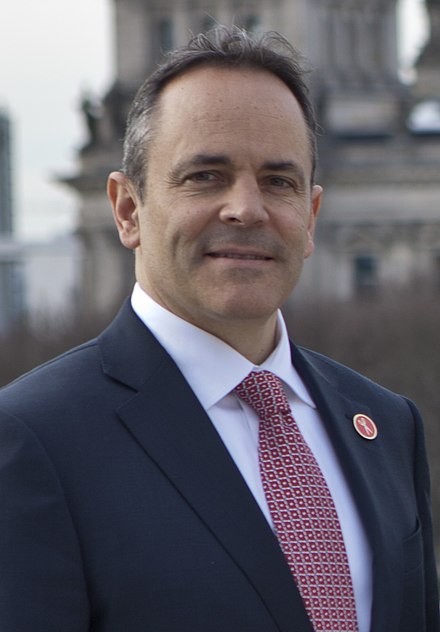 Matthew Griswold "Matt" Bevin (Born January 9, 1967 in Denver, Colorado) is an American Republican Party politician. Bevin was sworn in as governor of the US state of Kentucky on December 8, 2015. He ran for re-election in November 2019, but was defeated by his Democratic rival Andy Beshear, who replaced him on December 10, 2019.

In the party primary for the US Senate, Bevin, who was part of the Tea Party movement, was inferior to incumbent Mitch McConnell in 2014.

The second oldest of six children in a working-class family grew up on a farm in Coös County, New Hampshire, USA. His father made a living in a wooden mill. The family managed to get Bevin on the private Gould Academy to send to Bethel, Maine. With the help of a Reserve Officer Training Corps scholarship, Bevin attended Washington and Lee University in Lexington, Virginia, graduating in 1989.

Matt Bevin has been married since 1996. Bevin has nine children with his wife, Glenna, a nurse; she adopted four of them from Ethiopia.

After graduating from university, Bevin served four years as a soldier in the United States Army, where he achieved the rank of captain. Bevin began his professional career as a financial advisor to the SEI Investments Company first in Boston, later in Philadelphia. He then became Vice President of Putnam Investments appointed. In 1999 he moved to Kentucky where he started a company in 2003. In 2011 he became president of the Bevin Brothers Manufacturing Company in East Hampton, Connecticut and is now a multimillionaire.

Bevin's political career began as a member of the conservative think tankBluegrass Institute for Public Policy Solutions based in Bowling Green, Kentucky. He donated large sums to fund election campaigns for Republican candidates like Rand Paul and Mitt Romney and the Republicans in the state. In 2004 he was one of the supporters of Michael Peroutkas, the Constitution Party's candidate for the US presidency.

In 2014, Bevin ran for the US Senate, but was defeated in the internal party primary in May of that year to the mandate holder, later election winner and today's majority leader in the US Senate, Mitchell McConnell. Bevin, who had been supported by sections of the right-wing party base and in particular the Tea Party in an "anti-establishment" mood against the veteran incumbent McConnell, had put several million US dollars of his own fortune into the election campaign and only through the declaration of support by Rand Pauls lost the chance of a nomination for McConnell, the libertarian party friend who was elected a US Senator in 2010 by means of the Tea Party, against the incumbent who was considered a tough campaigner.[1]

In 2015 he announced that he was running for governor of Kentucky. Although in many polls his Democratic rival Jack Conway was in some cases well ahead[2] and previous incumbent Steve Beshear was also a Democrat, Bevin received 52.5 percent of the vote versus 44 percent for Conway[3] - The worst result of a Democratic gubernatorial candidate in the state since the Civil War.[4]

The Republican stylized himself as an outsider and anti-establishment candidate who was independent of the established political establishment because of personal wealth, and thus leaned on the similarly argued Donald Trump, who was leading in the Republican primary for the US presidency in 2016.[5] Bevin originally aimed his election campaign on economic policy, but switched to socio-political issues. He relied on controversial positions on health reform and equality for homosexual partnerships in order to increase his stake in the little-noticed election with low participation (so-called "off-year election") by mobilizing the right and evangelical base.[6] Only 30 percent of those eligible to vote took part.[7] Neither he nor his democratic rival candidate were considered by political observers to be particularly convincing candidates; the federal party had temporarily even withdrawn its financial support from Bevin. Chris Cilliza judged in the Washington Postthat the Republican victory was solely due to President Obama's persistent unpopularity in Kentucky; The strategy of the Republicans from the 2014 mid-term elections to reinterpret regional elections for voting on the policies of the Obama administration had also been successful here.[8]

Bevin's tenure as governor was accompanied by disputes over his confrontational style, despite the good economic development. Many of his statements were controversial; he confessed, for example, that he had not had his children vaccinated against chickenpox and that he was skeptical about mandatory vaccinations.[9] In the second quarter of 2019, he was in a survey of 32 percent Morning Consult the most unpopular governor in the United States. In the previous Attorney General of Kentucky Andy Beshear, the son of his predecessor, Bevin received a strong competitor on the democratic side; he himself won the Republican primary with just 52 percent of the vote.[10] For his main election campaign for the gubernatorial election in November 2019, Bevin sought proximity to President Trump.[11]

Bevin represents conservative values. He supports the system of education vouchers, advocates low taxes and intends to introduce right-to-work law in Kentucky as well. He announced the expansion of the state health care system established by former Governor Steve Beshear under the Affordable Care Act passed by the Obama administration, which reduced the number of uninsured people in the state by 400,000, from 20 percent to 9 percent of the population to undo.[12] Political observers believe that the related political disputes will lead to renewed discussion of Obama's health care reform after the Supreme Court ruled that it was legal, thereby calming political discussions on the issue.[13] On the controversial question of how to deal with town clerk Kim Davis, who was briefly imprisoned for a short time and stylized as a political martyr in right-wing conservative circles because of her refusal to recognize homosexual couples' weddings despite official instructions, Bevin clearly stood behind her in September. He visited her together with the conservative US presidential candidates Mike Huckabee and Ted Cruz in prison, publicly assured her of his full solidarity and spoke out against the equality of homosexual partnerships with marriage.[6]