Why can't submarines go to the ocean floor?

How deep can a submarine dive?

The biggest problem a submarine gets when diving is the water pressure, which increases with every meter of depth. Already 10 meters below the surface there is a water pressure of 1 kilogram on a square centimeter shell of the submarine pressure hull. Another kilogram is added every ten meters, so that at a depth of 1,000 meters there is already 100 kilograms on one square centimeter of the shell.

In the Mariana Trench, at a depth of 11 kilometers, the water pushes with 1,100 kilograms - roughly the weight of a small car - on every single square centimeter of the submarine's pressure hull. The "Trieste" was the first submarine to descend to this deepest point of the sea at a depth of 11,000 meters in 1960 and to explore the deep sea.

In order to withstand the water pressure, the pressure hull in which the two crew members Jacques Piccard and Don Walsh stayed was shaped as a ball. At this depth, around 170,000 tons weighed on the entire surface of the steel ball with its diameter of around 2.20 meters; its wall was four inches thick, making the sphere weigh a whopping 13,000 pounds.

The ball hung on a float filled with gasoline and made the submarine lighter than water overall. So that it could submerge. it was weighed down with scrap that was held in place by an electromagnet. When they reached the bottom of the sea, the crew simply dropped the scrap to surface by switching off the electromagnet and the boat rose to the surface again.

Among other things, the pressure hull in which the crew is staying is not spherical, but barrel-shaped, and this shape cannot withstand high pressures as well as a sphere. Simply using thicker steel to compensate for this is not possible: Because a military submarine must be able to travel very quickly; therefore it must not be too heavy, and so the shell cannot be constructed from steel of any thickness for reasons of weight. 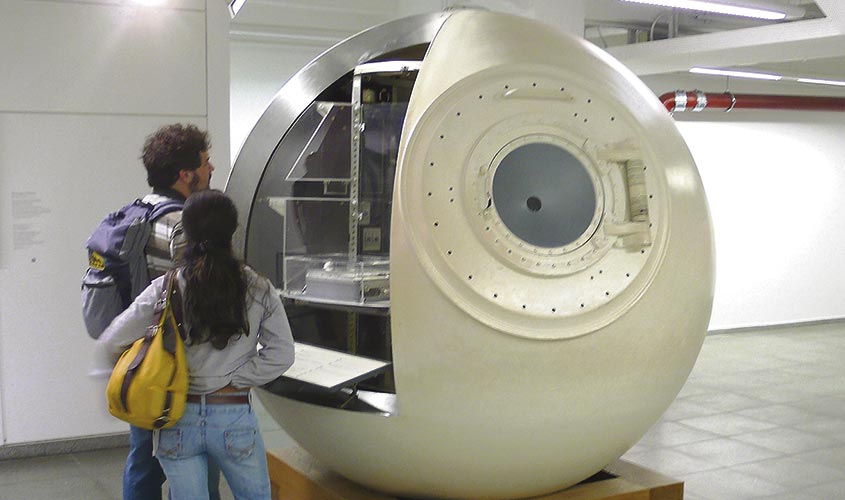 The replica of the pressure hull of the Trieste. The sphere was cut open to provide a better view and you can see the twelve centimeter thick steel wall.