What does ladybug eat

In autumn you can see them sitting on the house walls and every now and then the red beetles get lost in the apartment. What are the ladybugs actually looking for in the warm? And did you know that the lucky beetles live in packs over the winter? Why are there so many ladybugs in autumn?

Even if the ladybugs sometimes fly through open windows, they are actually not looking for a place to hibernate in the apartment, they are just lost. According to the Federal Nature Conservation Association, the constant warmth and heating air is not ideal for ladybugs, because then they do not fall into winter rigor. They need more energy than normal, but cannot find enough food in the apartments. It is therefore important that you expose a ladybug to the cold again so that it can find its rhythm again.

Ladybug in the apartment

Fly screens are a very simple means. But you can also put bay leaves, vanilla sticks or lavender oil on your windowsill. Ladybugs don't like all these smells and therefore stay away from them.

Simply collect stray ladybugs and put them outside.

If the beetles are already in the apartment, you can carefully collect them with a hand brush and release them outside. The so-called sock trick helps with larger collections: Take an old sock and put it over the vacuum cleaner pipe. The rest of the sock is loosely pushed into the opening. So suck in all the bugs on the lowest level. Now you can pull off the sock and free the ladybugs in the garden from the sock.

Ladybugs prefer to spend the cold season in cavities such as cracks in walls, knotholes or rafters, under stones, bark, leaves or in moss. In the appropriate hiding place, they fall into a freeze.

"The animals reduce their metabolism to almost zero and feed on the reserves that they have eaten. As cold-blooded animals, they hardly use any energy during the cold season, because their body temperature corresponds to the ambient temperature - they freeze through in freezing temperatures."

However, natural antifreeze in the blood does not freeze the beetles. The ladybugs are never alone in their winter hiding place, they gather in a common place in autumn and warm each other during winter.

This is how ladybugs feel good in your garden 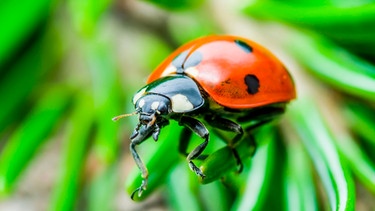 Ladybugs are particularly comfortable in piles of leaves and dead wood corners.

Luring ladybugs into your own garden is not difficult at all. As soon as you stop using chemical pesticides, aphids will appear and a few days later there will be ladybugs too. They take care of your aphid problem. You can also offer the ladybirds hibernation places in your garden. Piles of leaves and dead wood corners are suitable for this. Botanist Fleischmann also points out that you can support the local ladybird all year round:

"Create species-rich habitats in your own garden. Do not use poisons against aphids, because without aphids there are no ladybugs, hoverflies and other aphid eaters."

What do the dots on the tank mean?

The dots on the red carapace do not indicate the age of the beetle, but the type of ladybird. The seven-spotted ladybird is most widespread in Germany. Three points each sit on the two wings, the seventh is in the middle of the back at the transition from the neck to the back.

"In Europe alone there are around 250 different species of ladybirds. Some of them live for several months, and some species have several generations per year, which then hibernate." 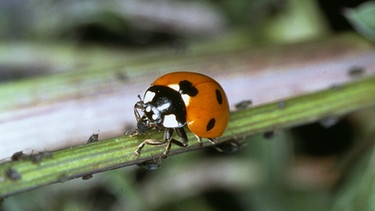 The beetles get their name from the Virgin Mary.

According to the Federal Nature Conservation Association, a ladybird eats 100 to 150 aphids per day. Ladybird larvae are similarly voracious. In the three weeks until pupation, a larva eats between 400 and 600 aphids. Ladybugs also eat spider mites, bed bugs, fringed winged beetles, beetle and sawfly larvae. Because the beetles eat pests and are therefore so useful, the ladybug is also called the ladybird. It used to be believed that the beetles were a gift from the Virgin Mary and therefore named her after her.

If there are not enough aphids, some species of ladybirds simply switch to a vegetarian diet. They then eat pollen and fruit until there is enough other food again.

The ladybug - the skunk among the beetles

Have you ever let a ladybug crawl over your hand? Sometimes the beetles secrete a yellowish liquid. They always do that when they feel threatened. The yellow secretion comes from the pores in the synovium. It smells very strong and is poisonous to other animals. The secretion does no harm to humans. But natural enemies such as ants, ground beetles and predatory bugs are put to flight by the stench. Biologists call this process "reflex bleeding". By the way: birds, mice or lizards do not like the red beetles very much because they taste extremely bitter. 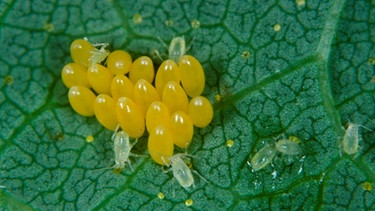 Ladybugs stick their little yellow eggs to branches, in tree crevices and on the underside of leaves in spring. Ladybug larvae hatch after about a week. These look very different depending on the type of ladybug. The larvae of the seven-point beetle are black and change their color to gray with yellow or orange spots after several moults. When the larvae have eaten enough aphids, they pupate. The finished ladybugs then hatch from these pupae. These are initially still completely yellow. The beetle only gets the red-black color after a few hours when the wing covers harden. In autumn the animals look for winter quarters together.

Especially in autumn you can see the red beetles sitting in large flocks on house walls. These are mostly the harlequin ladybirds from AsiaHarmonia axyridis. This species can turn light orange to dark red and has significantly more points than, for example, the native seven-point ladybug. He is the most famous ladybird in Germany and is used by biologists Coccinella septempunctata called. 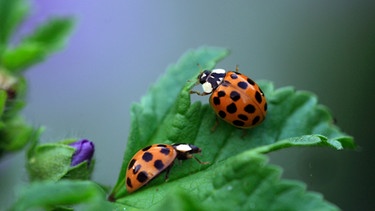 The Asian harlequin ladybird eats the lavas of the local ladybirds and is therefore becoming more and more a problem.

The harlequin was initially used in commercial horticulture for biological pest control in greenhouses. A few years ago it was released into the wild and since the harlequin ladybird reproduces very quickly, it is even more common in some places than the native ladybird. The problem: the harlequin not only eats aphids, but also the larvae of local ladybirds and hoverflies. In addition, he brings parasites with him that our domestic beetles are not protected against, explains Andreas Fleischmann.

During the insect summer 2020, a focused call was made to count ladybugs. Are there more native seven-spotted ladybugs or more Asian ladybugs? The result: The seven point appeared in 3,175 reports, the Asian in 2,679 reports. These figures show that the Asian ladybird, which was introduced a few decades ago, is now established throughout Germany, but has not yet displaced the domestic seven point, reports NABU.

When was the last time you saw a grasshopper? Why grasshoppers are becoming increasingly rare, what you should know about these insects and why they are so important to us.

What is the ladybug looking for in my apartment? Have you ever wondered why there are so many ladybugs out and about in autumn? 🐞Posted by BAYERN 1 on Thursday, October 17, 2019