What are the dimensions of the lungs

The extent of lung damage from smoking can be identified earlier by quantifying the loss of branching complexity throughout the bronchial system. This enables a special mathematical analysis method, the so-called fractal analysis of CT images, which makes use of the fact that the lungs are built up like a fractal according to the principle of self-similarity from increasingly smaller copies of their bronchial branches. 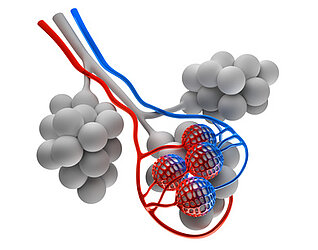 Signs of incipient chronic smoker's bronchitis (COPD) are thickened walls and thus narrowed diameters of the airways as well as an increasing loss of bronchial branches in the periphery of the lungs (affecting the smallest airways). For some smokers who do not have a detectable airway narrowing during a CT examination, an increased risk of illness and death may still be determined - with the help of a special mathematical analysis method: the so-called fractal analysis of CT images to determine the fractal dimension the respiratory system (airway fractal dimension = AFD). “A major advantage of the fractal analysis of CT images is that the extent of lung damage from smoking can be identified earlier by quantifying the loss of branching complexity in the entire bronchial system - and thereby the patient's risk of developing COPD and in the Compared to healthy people, dying prematurely can better estimate ”, explains Dr. med. Thomas Voshaar, Chairman of the Board of the Association of Pneumological Clinics (VPK) and Chief Physician of the Lung Center at Bethanien Hospital in Moers, citing current study results from the USA. Researchers and clinicians have been looking for a method for earlier detection of changes in the bronchial system, which in COPD always appear first in the periphery and then usually go unnoticed for a long time. Only when symptoms such as shortness of breath occur during physical exertion can a lung function test prove impairments.

Background: The lungs have a similar structure to a fractal

The basis of the fractal analysis is the structure of the lungs, the structure of which corresponds to a fractal, i.e. a geometric pattern that was first described in 1975 by the mathematician Benoît Mandelbrot and whose main characteristic is "self-similarity": a fractal consists of several, always itself In addition to representations of mathematical amounts of Mandelbrot on the Internet, for example Romanesco cabbages at a vegetable stand or stately trees in nature, as each tree branch - regardless of its degree of branching - resembles a scaled-down tree. But internal organs are also structured like a fractal. Similar to the branches of a tree, the bronchial system of the lungs branches out into ever more delicate structures - starting with the windpipe, which is divided into two main branches, each of which supplies one of the two lungs with oxygen. If you zoom in closer, you can see that the lobe bronchi at the ends of the main branches branch out further to the segment bronchi and then into smaller and smaller branches. After about 20-25 levels one arrives at the smallest branches of the bronchi, the so-called bronchioles, which have an inner diameter of less than 1 mm and which then turn into microscopic branches (Bronchioli respiratorii and alveolar ducts). These finally lead into the actual, breathing lung tissue with a total of around 300 million pulmonary sacs (alveoli). The alveoli, which have a diameter of 0.1-0.2 mm as miniature balloons, give the lungs their spongy appearance and are tightly packed in grape-like form with the finest tubular branches (alveolar ducts and Bronchioli respiratorii) deposited. Its wafer-thin walls are criss-crossed by a network of tiny blood vessels (capillaries) that enable the breathing gases to be exchanged quickly. Each alveoli is surrounded by around 1000 capillaries.

The less complex the bronchial branches, the more susceptible the lungs to disease

In the current study with over 8000 smokers (see Journal of Clinical Investigation, doi: 10.1172 / JCI120693) researchers at the University of Alabama in Birmingham have found a clear connection between the fractal dimension of the airways and the following parameters of lung health: the lower the branching complexity, the higher the degree of airway narrowing, the incidence of airways disease and the loss of lung function in terms of the one-second capacity FEV1 (which indicates the maximum volume of air that the patient can exhale in one second). Less clearly, but also tends to be more pronounced, the AFD is also related to the quality of life of the patients and their physical performance (6-minute walking distance), as well as - inversely - with the frequency of deterioration (exacerbations). "In the future, it would be very informative to determine the fractal dimension of the airways during CT examinations of smokers, since a loss of complexity of the bronchial branches can provide a good indication of how severely damaged and thus disease-prone the patient's lungs actually are ", Summarizes Dr. Voshaar together.

This is a press release from the Association of Pneumological Clinics (VPK). This press release or parts of the article can be printed under the following source: www.lungenaerzte-im-netz.de. In the case of publication in online media, this source is required (in the form of an active link either to the home page or to a subpage of the Pulmonary Doctors-on-the-Net website); if published in print media, reference to this web address is also required.