Does NASA have any high school internships

There are no translations available. 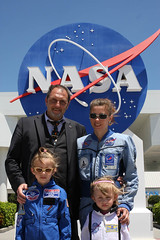 Exactly 30 days ago, the International Space Education Institute Leipzig (ISEI) started its most extensive trip abroad to NASA in the USA as a support association for natural sciences. The annual school trip for this time the 20th NASA Moonbuggy Race was extended by an entrepreneur and award trip to Cape Canaveral and framed by a 4-week tour of the board of directors to 4 NASA centers.

An overview of all 61 albums from the last 30 days

During these 30 days, 10,235 km (6,360 miles) were covered by car and van in the USA, 62 appointments, some of which were highly endowed, were taken, 6330 unique photos were shot and 200 GB of data were produced in short films. 256 overnight stays were organized for 15 participants during this time.

The ISEI university team, led by Nadin Rößler and Evgeniy Zakutin, came in second out of 40 teams in their class. The team then received a 10-day award trip led by NASA headquarters to the Kennedy Space Center on Cape Canaveral.

Dim lights
Nadin Rößler (19) has been a member of the ISEI program for 3 years. She rates her personal result.

The new and not yet experienced high school team with the participants Araceli Zeller, Tobias Volte and Sang Jin Kim brought their Moonbuggy through the course flawlessly and reached 13th place out of 48 teams in their class. It receives a delegation for a one-week award trip to the children and youth festival "Off - we go!" in Moscow. This "1st International festival of children’s and youth aeronautic and astronautic creative works" will take place in August 2013 as part of the MAKS aerospace exhibition.

The entrepreneurs from Leipzig and Hanover who traveled with them were able to accompany the packed program for 14 days, experienced the enthusiasm of the young people in the NASA Moonbuggy Race, were able to visit technically oriented US schools and support craft companies. There was a meeting with the Vice President of the Chamber of Commerce of Huntsville and the mayor of the city. There was also an exclusive tour of the Space Camp and a VIP tour of the Kennedy Space Center on Cape Canaveral, guided by NASA headquarters. Further meetings and private discussions followed. At all locations, business people were able to see for themselves the team spirit and willingness to support the new generation to prepare for the challenges of future cutting-edge technologies. Work on the preparation of new launch sites and infrastructures for the SLS program (new rockets and spaceships for the moon and Mars with initial launches from 2017) was observed.

In addition to the overall planning of all activities, the supporting program of the ISEI board mainly included the justification of the public appreciation of the life's work of Prof. Dr. by Puttkamers. Various discussions were held at NASA's Washington headquarters, with the director and press officer of the Marshall Spaceflight Center in Huntsville / Alabama, the current owner of the Puttkamer house in Huntsville / Alabama, and with his former colleagues at Cape Canaveral. The result of all the meetings was that by September 22, 2013 (the 80th birthday of the German-born NASA scientist), the first efforts in the form of panels at the Leipzig birthplace and the Huntsville residential building would be undertaken. For the Leipzig part, the ISEI held preliminary talks with Wolfgang Tiefensee through a contact person in February 2013. The establishment of a support foundation in the spirit of the professor's life's work was discussed very positively and postponed to further discussions with the publisher.

There were three unforeseen appointments. NASA and the Orbital Science Corporation (OSC) surprisingly invited to the rocket launch at the Wallops Flight Center. Diverse contacts could be made here with a number of highly motivated engineers from this established private rocket manufacturer. In the future this will, among other things, undertake forwarding tasks to the International Space Station ISS.

The German School Washington and the Broad Run High School in Ashburh / Virginia invited the ISEI board to a lecture. Space Camp Ambassador Yvonne Heckel and the chairman Ralf Heckel were able to motivate grades 6-10 to participate in the NASA Moonbuggy Race and ongoing exchange programs. These activities are now being personally supported by the head of DLR's Washington office, Mr. Jürgen Drescher.

Finances:
The 250 preparatory events required for this final excursion and the extensive trip abroad itself were financed without government or tax money. As an in-house operation of the International Space Education Institute, the Space Hotel Leipzig sponsored the 12-month preparations with a budget of approx. 60,000 euros (annual financial statements still pending). The North American aerospace company supported these preparations by taking over the exhibition stand at the ILA 2012 in the amount of 32,500 euros.

German companies are funding the construction of the two moonbuggies with a budget of 12,188 euros (donations in kind and money). For the 30-day US trip, a budget of 16,927 euros was moved and raised down to the cent in advance (monetary donations from companies, private individuals and space hotel guests, list below).

Unpredictable but profitable extra appointments resulted in additional costs (petrol, hotel, toll) in the amount of 800 euros, which have already been completely offset (reports, rental of the work space in the ISEI Moonbuggy hall to 3 other international teams). At the end of the excursion, there is still a minus of 200 euros in the cash register, because the Baden-Württemberg school of one of the participants has not yet transferred the same amount of funding for its pupil.

The participating pupils only contributed a part of the flight costs (650 euros each), the meal costs (150 euros) and the costs for the ESTA (15 euros) through their parents. These costs can now be capped again after the trip through success bonuses (cash prizes) and public appearances. All other fellow travelers paid their own board and lodging costs. Supervisor and instructor hours were carried out on a voluntary basis.

The sponsors of this project are called upon to take part in a discussion to determine a premium form for the successful participants by May 22, 2013 in writing. Bystanders and fans are welcome to submit donations for this purpose.