Which coins are named after places

In Würzburg were Coins coined by the prince-bishop from 1030 to the secularization of 1803 and were considered a local and regional means of payment. Gold guilders, thalers, denarii, shillings, kortlings, hellers and kreuzers were struck. Many examples of such historical coins are exhibited in the prince's building museum of the fortress.

Initially still a royal mint, in 1030 the mint, customs and market rights as well as jurisdiction were granted to the bishop. Pfennigs, so-called denarii, were minted. The Würzburg mint appeared for the first time in the Carolingian era with a royal coinage from Ludwig IV the child (899-908) and remained active for the empire into the early 11th century. [1]. Under King Henry IV she worked again briefly for the empire.

In the following decades the mint was jointly owned by the Würzburg bishop and the counts of Henneberg. After 1373 larger coins were minted (shillings), 1506 gold guilders and from 1522 thalers. According to the coinage order of 1524, the name of the emperor and the year had to be on one side. According to the coinage order of 1559, imperial eagles with imperial orb and the value were prescribed. Guldentaler were minted for 60 kreuzers, ½ guldentaler for 30 kreuzers and tens of 10 kreuzers. At the request of several coin stands in southern Germany, the following were also permitted, e.g. for Würzburg: Schillings (28 pieces = 1 Guldentaler), Körtlinge (84 pieces = 1 Guldentaler).

From 1637 the title of the emperor can no longer be found on Würzburg coins. The imperial eagle is also replaced by the Madonna, St. Kilian or a coat of arms. On the front of the coin is the bust or coat of arms of the bishop and the title of bishop. In 1799 the bishop minted the last coins; This is the end of a long history of coins that also produced some special features.

The Kiliansschilling was minted during the tenure of Prince-Bishop Johann Gottfried von Guttenberg between 1685 and 1694.

The reverse of the coin shows a portrait of the diocese saint St Kilian.

The 3-Heller coin was only minted on one side as a means of payment, 1 Heller corresponds to 1/128 Taler. The coin is named after the city of Schwäbisch-Hall,

Relief with three coats of arms: Franconian rake and little racing flag in the background, chessboard-like cross (coat of arms of the von Ingelheim family) in the foreground, above the designation: "III H" for the value determination.

The 4 Kreuzer coin was minted as a means of payment. The cruiser goes back to a groschencoin that was in circulation in Merano / South Tyrol from 1271. It was given the name Kreuzer because of the double cross on the obverse of the coin.

Relief of a Madonna and Child. The inscription reads: "Suscipe et protege" (Take up and protect!) And the year 1748.

The Konventionstaler was introduced as the successor to the Reichstaler through the Convention of September 20, 1753 in the Bavarian Reichskreis, later also in Würzburg.

The obverse shows the likeness of Prince-Bishop Georg Karl von Fechenbach and his name and office in the marginal inscription.

The reverse shows the coat of arms of the Prince-Bishop, his motto "Pro Patria" and the face value of the coin: "X a fine Marcor". 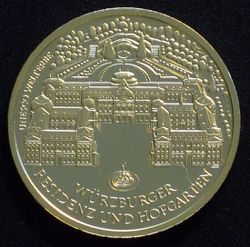 The front shows the residence and court garden in Würzburg and the reference to the UNESCO World Heritage.

The reverse shows the federal eagle with the words "Federal Republic of Germany" all around and the nominal value of 100 euros at the bottom.