Why did the euro currency not work well

Why the strong euro can become a problem for the economy

On the other hand, it makes imports cheaper and thus pushes the already chronically low inflation in the euro area even further. Both factors would be a challenge even in normal times. In the midst of the greatest economic crisis since the Second World War, this is particularly true.

"The appreciation comes at an inopportune time," warns Commerzbank foreign exchange expert Esther Reichelt. The strong euro is burdening the European economy and thus delaying the economic recovery in the crisis. "In the current situation, everyone would want a weaker exchange rate." The chief economist of the Institute of International Finance (IIF), Robin Brooks, is even more clear: "The euro is far too strong," he writes on Twitter. And: "Europe cannot stand a strong euro."

Brooks points out that the usual comparison with the dollar still underestimates the extent of the euro’s strength. Because the dollar has developed relatively strongly over the course of the year, so that many currencies have depreciated against it. In other words: Against other currencies such as those of important emerging countries, the euro has appreciated even more. 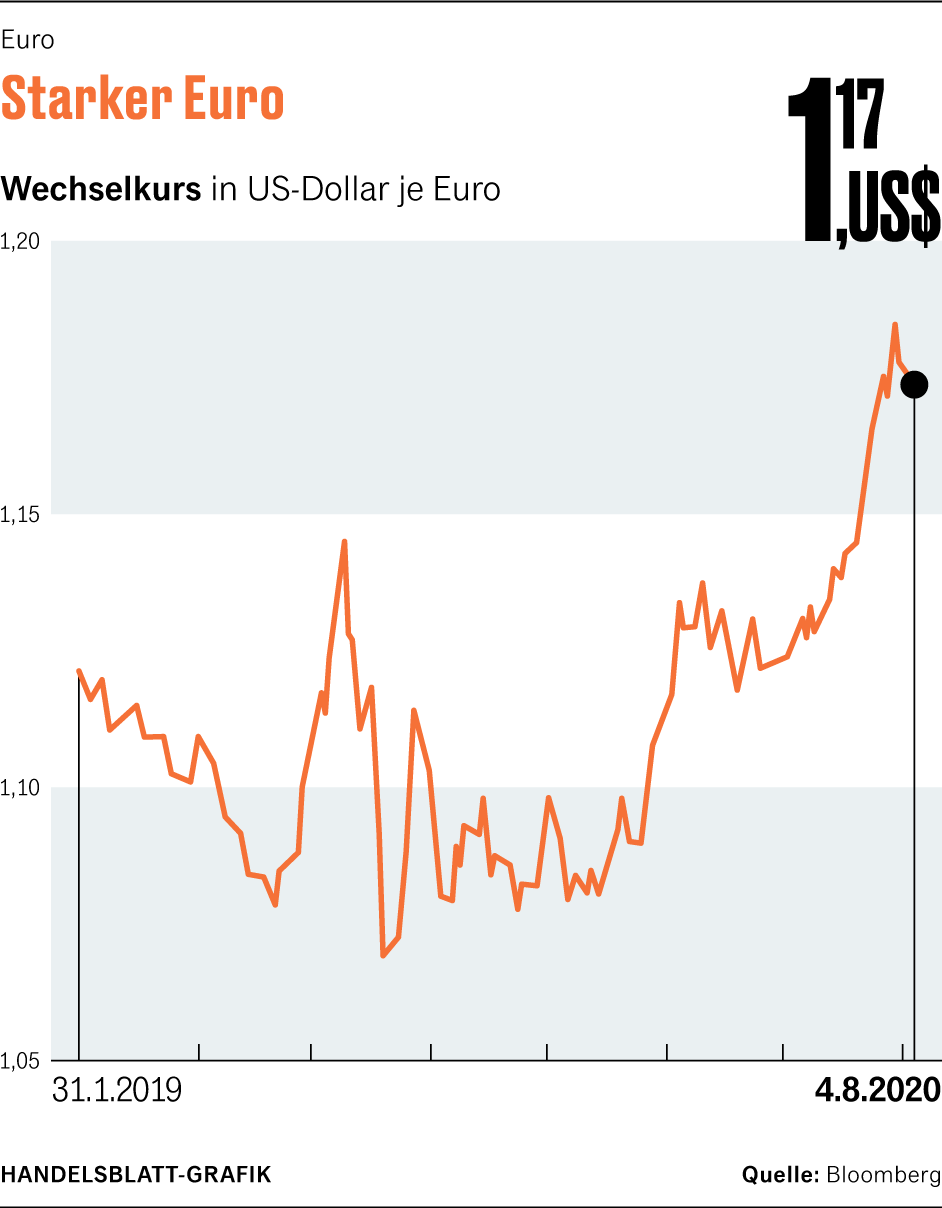 Brooks fears that inflation in the euro area will fall back to the old lows from 2014/15 due to the strong euro. At that time, many economists saw the danger of a deflationary spiral from falling prices and an economic downturn for the currency area.

It is currently very difficult to forecast further inflation developments. In view of the trillions in aid from governments and the European Central Bank, some fear that prices will rise more sharply. However, the majority of economists expect the crisis to depress inflation due to weaker demand and rising unemployment. In this environment, a strong euro could cause prices to slide even further.

In addition, the euro countries are much more closely linked to the global economy than, for example, the USA. That makes them more sensitive to an abrupt euro appreciation. Because for a car that is produced in Germany, most of the costs, such as wages, are in euros. If the euro appreciates, the manufacturer either has to sell the car at a higher price in other currency areas, which makes it less attractive - or its profit margin decreases.

In normal economic times, when inflation is higher and companies are selling well, the strength of the euro would be easier to get over. In the current crisis, however, this is all the more difficult.

There are several reasons for the euro rally: The agreement on the joint reconstruction fund in Europe provided an important impetus. At their summit almost two weeks ago, the EU countries approved the fund with a volume of 750 billion euros. Of the funds, 390 billion euros are to flow as grants to member countries particularly affected by the pandemic.

"That was a signal that the EU can come to an agreement when the going gets tough," says Commerzbank expert Reichelt. From the point of view of the financial markets, it seems particularly important that the EU countries stand up for one another to a certain extent. The agreement shows "that the core, and in particular the Franco-German axis, is ready to defend the integrity of the EU and the euro zone," said Ebrahim Rahbari, foreign exchange expert at the major US bank Citigroup.

Another important reason for the strength of the euro is the significantly narrowed interest rate differentials to the USA and other currency areas. At the beginning of the year, the key interest rate in the US was 1.5 to 1.75 percent. This made it much more attractive for international investors to hold excess capital in the US than in Europe. In the corona crisis, however, the US Federal Reserve cut the key interest rate to almost zero within a very short time - the European Central Bank (ECB), on the other hand, did not touch the deposit rate, which is crucial for the euro area, and left it at minus 0.5 percent. 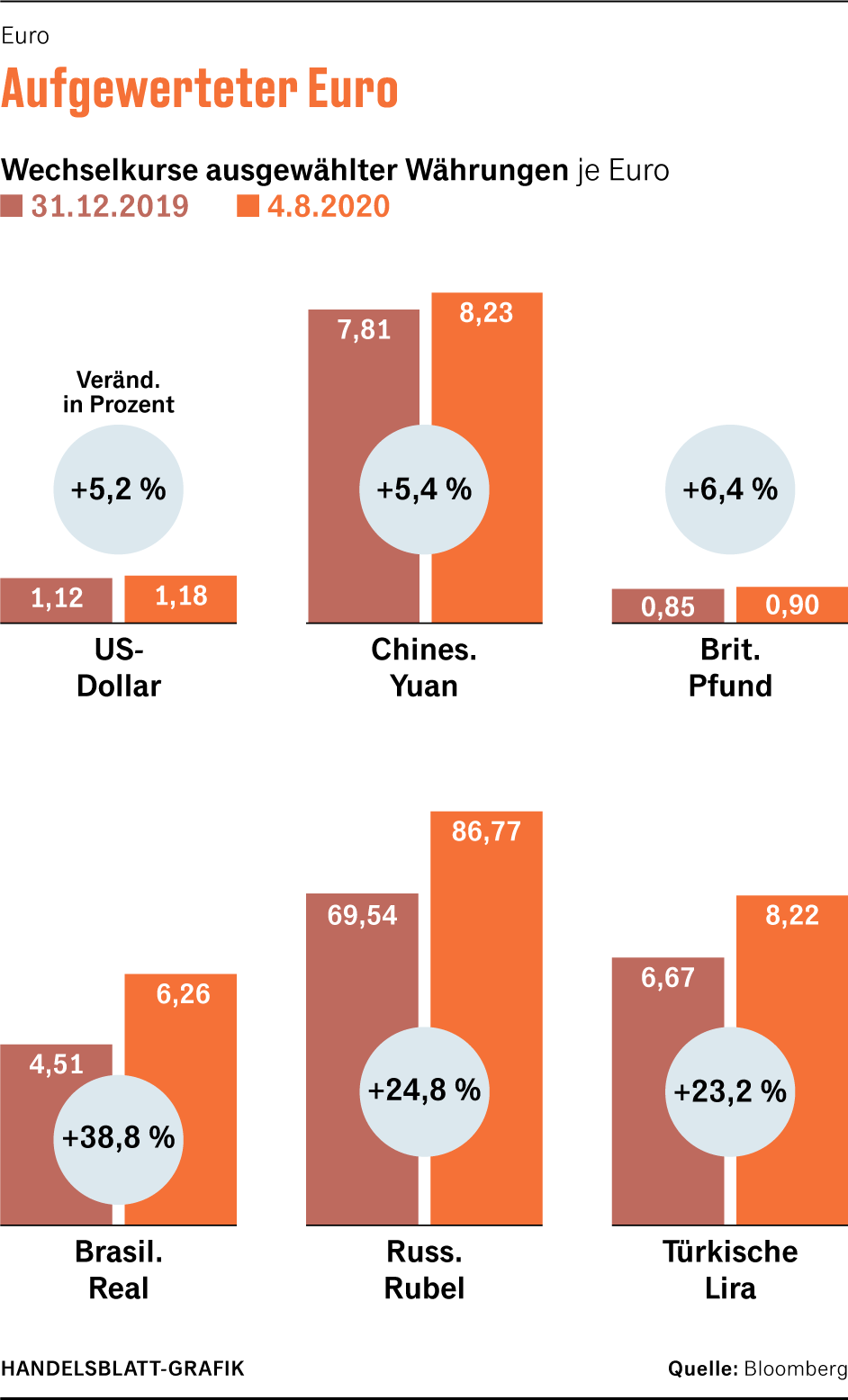 The US has thus almost completely lost its interest rate advantage, which has long been considered the key driver of a strong dollar, within a few months. In the wake of the Fed, many other central banks, such as those in Canada, China, Russia, Brazil and many Eastern European countries, cut interest rates, in some cases significantly.

The smaller interest rate differentials also make it less attractive to use the euro as a financing currency. For a long time it seemed like good business for companies from other currency areas to borrow in euros and use the capital for investments in other parts of the world - which tends to weaken the euro. Such business is now becoming less important.

In addition, Europe currently seems to have a better grip on the corona pandemic than the USA, despite the increasing number of infections. The number of infections in the US is "still high and far exceeds the rest of the world, the risk of a second outbreak remains real and the reopening of the economy is unlikely to happen very slowly," emphasizes Ken Orchard, portfolio manager at global asset manager T. Rowe Price. He also points to the weak sentiment indicators for the US economy. Commerzbank expert Reichelt also says: "There are great doubts in the markets about how the US government is dealing with the health crisis."

However, there are problems in the USA not only in dealing directly with the pandemic. The negotiations on further economic measures to cushion the crisis are also stuck. Important funds to support the economy such as the extended unemployment benefits have expired. So far, Democrats and Republicans have not been able to agree on a new stimulus package. The longer the negotiations drag on, the more it will weigh on the dollar - and support the euro even more.

While the euro has also benefited from positive developments such as the reconstruction fund in recent weeks, the weakness of the dollar could drive the exchange rate even more in the future. Reichelt believes that the further development of the euro and dollar depends heavily on the course of the pandemic.

The US Federal Reserve recently expanded its aid to the economy again, partly because of the increasing number of new infections. In contrast to Europe, the US currently looks more like the central bank will be able to add more. The Fed is also concerned with direct control of the yield curve. This means a new form of monetary policy in which the central banks not only set very short-term key interest rates.

Instead, the entire yield curve, i.e. the level of government bond yields across all maturities, is kept within a narrow corridor. While such a move is not imminent, even more intense debate about it could hurt the dollar. “If the pandemic comes to a head, it will have a significant impact on the real economy and monetary policy. We see further risks for the dollar in the short term, ”says Reichelt.

Despite the current strength, the euro could appreciate even further. The mark of 1.20 dollars per euro is already close. However, the strong euro harbors serious problems for the economy in the euro area. In view of the challenges posed by the crisis, many companies would be grateful if he did not move further.

More:Gloomy outlook for the pound sterling.