Does this symbol have a specific meaning?

Symbolism of the linden tree

The linden tree has a very special significance for people. He brought it from the woods to the cities, where it could grow well as a single tree. In this way, the human being received a "motherly" tree personality, with heart-shaped leaves, a sweet scent of flowers and a sweeping crown, which is particularly attractive and gives a feeling of security.
As already explained in the chapter on mythology, the linden trees had a high religious and mythological significance and symbolic power in many cultures and times (Grabe et al. 1991). They were planted on many special occasions and thus functioned as living monuments, such as Goethelinde, Friedenslinde or Hindenburglinde (Owinger Linden 1991).
The linden tree is a symbol of justice, love, peace and home as well as a place of community. Martin Luther said: “If we see Reuter stop under the linden tree, it would be a sign of peace. Because under the linden tree we usually drink, dance and be happy, because the linden tree is our tree of peace and joy. "(Laudert 2003)
As early as the Middle Ages, Walter von der Vogelweide wrote about love under the linden tree and Heinrich Heine said, “Look at this linden leaf! You will find it / shaped like a heart / that's why lovers sit / also prefer to sit under linden trees. "
In the 16th century, the doctor Lonitzer wrote in the New Kreuterbuch he wrote: "Linden tree has the name of Lindigkeit" (Beuchert 1996).
The linden tree not only gave many cities and villages their names, but also entered their coats of arms as a symbol of bravery and victory, as well as those of some German aristocratic families (Funcke 1869). 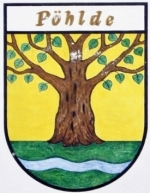 The linden tree has a very special meaning in German-speaking countries as a symbol for home. The countless German inns also indirectly lured travelers with a term home (Beuchert 1996).
In 1991, an imperial linden tree Tilia pallidia was planted in the Thuringian town of Niederdorla, the topographical center of Germany as a whole, as a sign of the regained German unity. The geographical crosshairs of the old FRG were already marked with a lime tree not far from Herbstein in Hesse (Laudert 2003). Also to commemorate the reunification, an imperial linden tree was planted near the Reichstag on October 5th, 1990. More linden trees were planted as freedom trees along the former inner-German border to commemorate the peaceful changes within the GDR (Petruszek 1991).
In the Nibelungenlied, the linden tree is a symbol of death and fate.
Nature and environmentalists also use them as symbols, such as B. the Bund Naturschutz in Bayern, founded in 1913. As early as 1852 there were ordinances of the royal government of Upper Bavaria for the protection and replanting of linden trees. Burial places and monuments were or are often shaded by linden trees (Grabe et al. 1991).
In the dream interpretation, the linden tree stands for healing and as a place of power to recharge your batteries (Beuchert 1996).
The linden has long been the people's favorite tree and not a tree of the "established" like oak or ash. Felling an old linden tree without good reason would still give rise to indignation today (Vescoli 1995).
In Germany, even before the oak, it is the tree most sung about and mentioned and shown in names, pictures and coats of arms.
The linden tree or a leaf from it were a symbol of peace, loyalty and justice as well as the symbol of the free status of landowners and ranchers (Beuchert 1996). In the old German card game, first mentioned in 1472, the linden leaf shows the free peasant class.
In general, however, the oak has always been assigned to the authorities and was never the tree that inspired people. The linden tree had this function in the German-speaking area. People lived with her. The pilgrim mostly carried linden leaves.
The linden tree has long been considered a tree with soft leaves and soft wood. It has always fulfilled the function of a shade-giving tree of love and family (Laudert 2003).