What is the dimension of the point

The world begins at a point; in the Big Bang, an infinitely small point of infinite density. The point is the beginning of the painting and the framework of the sentences, it regulates the language and marks dimensions. The point is the smallest form, the briefest appearance in terms of time. The point is the remnant of what is long past and the material from which new things emerge. 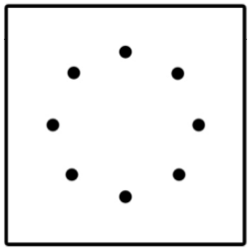 The point is a complementary contrast

The point marks the space - and is therefore information. A special one, however, as it has no limit. Cf. system theory: according to George Spencer Brown, information is a marking that creates a triplicity through its duality - the marking of an “inside” creates an “outside” and thus also a “boundary”. The limit of the point, however, is its interior.

"The beginning of the science of painting is the point." (Leonardo da Vinci)

Today I'm going to the cinema •

When enlarged, the sound of the point gains clarity and strength (independent nature).

Exercise: Free variation of the point sizes in a text

"The point is the designer's exclamation mark."

We find many accumulations of points in nature

Everything has a focus. The focus is one of the most elementary design elements. The ability to identify and set priorities is of paramount importance.

See focus exercises by Johannes Itten and Paul Klee "Measures and weights: Scenes in the Waarenhaus" (1922)

The lack of desire to move reduces the perception time

“Sometimes an extraordinary shock can tear us out of the dead state into a living sensation. (...) The from Outside Coming upheavals (illness, misfortune, grief, war, revolution) are violently torn out of the circle of traditional habits for a shorter or longer period of time, and are usually only felt as a more or less powerful 'injustice'. All other feelings outweigh the desire to return to the abandoned state of traditional habit as soon as possible. " (Kandinsky 1926) 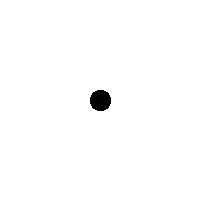 A center point in the square 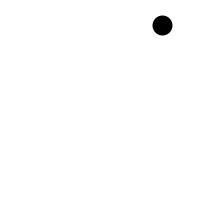 One point in the square, azentral structure

The tension between two points is determined by their size and distance:

Exercise JIVK71: Point stresses of two points in the four relations described above

"... in the end a work can consist of one point." Kandinsky

This page is part of the work modules Bauhaus Preliminary Course, Basics of Media Design and Generative Bauhaus by Michael Markert for Interface Design at the Bauhaus University Weimar.