Did the Euro Italy fail

Bella Italia has dismantled both politically and economically over the past decade. Unlike Germany and, more recently, France, the third largest euro country failed to take on the challenge of globalization. The cumbersome state apparatus with its excessive bureaucracy and a sometimes miserable infrastructure systematically deter investors.

Economy on the brink

The old generation rests on their benefices and takes the chances of the well-educated youth. Many disaffected young Italians have left their country. Italy is the only EU country that has not benefited from the economic upswing of recent years. In terms of economic growth, the country ranks last in the EU.

Responsibility for the malaise lies with the country's elites - and not just the political ones. The companies in rich northern Italy shouldn't be indifferent to the fate of their homeland. One would like the economy to have a more moderate effect than before on the national populists in the government.

Italy has been going downhill for years. But now the League and the five-star movement are quickly heading towards the abyss. This shows the hectic reaction of the financial markets to the Roman budget draft for 2019. It was agreed with the EU that the deficit ratio will drop to 0.8 percent next year.

The government in Rome has now made 2.4 percent of this in order to pay for expensive election promises. The already gigantic mountain of debt is supposed to get even higher - and that with unchanged low economic growth.

This development is a disaster for the EU Commission. The Brussels budget guards have not been so patient with any other country in recent years. Nobody else was granted so many exceptions to the rules of the Stability Pact. Again and again, the country was allowed to incur new debts for certain expenses - for example for refugees or for earthquake victims. Italy needs time to push through difficult reforms, argued a well-meaning EU Commission time and again.

However, nothing came of most of the reforms, unemployment is still high, frustration among the people increased and with it anti-European resentment. Almost all political parties in Italy blame the EU for the misery. So it is no wonder that two explicitly anti-EU parties came to power.

The EU Commission failed with its policy of generosity. Now she has to pull up other strings. If the government in Rome does not give in after all, criminal proceedings because of an excessive deficit will be inevitable.

Maybe it's too late for that. The risk premiums on Italian government bonds are rising, the banks are under pressure and the flight of capital has long since begun. It is possible that the crash in the markets will get out of control at some point - for example in the event of an economic downturn or a sharp rise in interest rates. 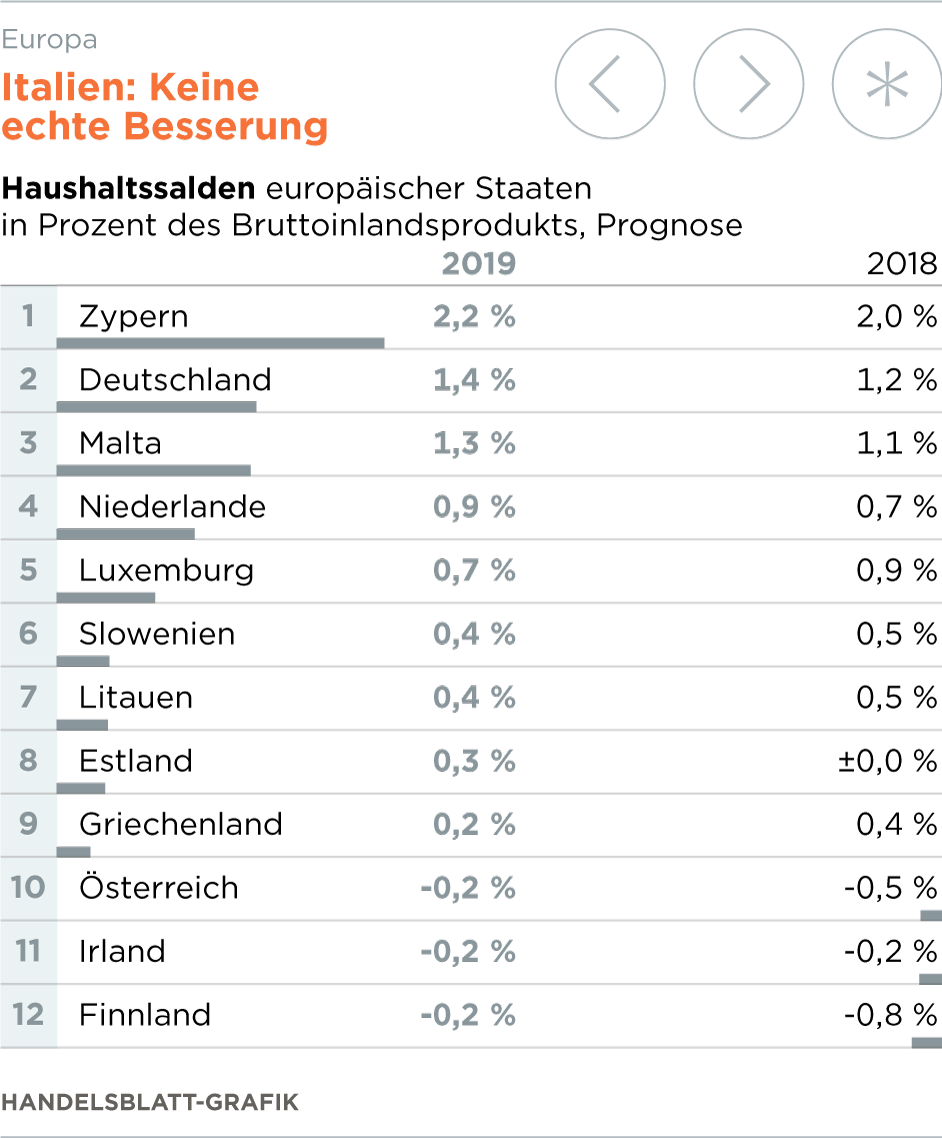 The euro zone would then face an unprecedented test: it may have to cope with the exit of a country for the first time. The monetary union cannot sustain Italy financially, if only because of its size. The euro rescue fund would be hopelessly overwhelmed by the mountain of Italian debt. In addition, it is hard to imagine that the parliaments of solidly managed euro countries such as Germany, Holland or Finland will approve a billion dollar loan for irresponsible Italian populists.

The euro zone will then have no choice but to seal itself off: It must protect other member states and their banks from falling into the Italian downward pull.

For Italy itself there would probably no longer be a lifeline in the monetary union. What that can mean can be seen in Argentina: hyperinflation, unemployment, impoverishment. The price for political denial of reality is paid by everyone, not just those who caused it.