Why are robotic vacuums round

“Robot vacuum cleaner attacks sleeping housewife!” Right before I write this blog post, I stumbled upon this curious headline. Background: In South Korea, a vacuum cleaner actually got tangled in its owner's hair. While the woman was running the machine, she took a nap on the floor.

A hint that too much convenience and enthusiasm for technology are bad for your health? Of course, I didn't think of such absurd dangers when I bought a robot vacuum cleaner around two years ago. Meaningful or gimmick - that was the crucial question. First of all: Anyone who thinks they will never have to vacuum again thanks to the automatic helper is wrong.

But first things first: My choice fell on the "Roomba 780" - a model that was repeatedly rated positively in tests and experience reports. Set up the charging station, fully charge the robot once and off you go.

Apparently unstructured, the Roomba made its way through the apartment. While other models navigate in a targeted manner thanks to a camera (if there is sufficient light), he drives “blind”, but by no means randomly. If you believe the manufacturer, the path is recalculated countless times per second, so that at the end of the day, each point was traversed four times on average.

Better and better over time

I couldn't check that at first, as the robot reported a full dust container after only two rooms - of course not because it was dirty everywhere. 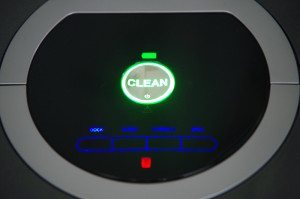 A red symbol indicates that the dust container is full.

No, the Roomba simply drove easily under the bed and all the kitchen furniture. Cleaning these hard-to-reach places is undoubtedly a great strength of the little robot. 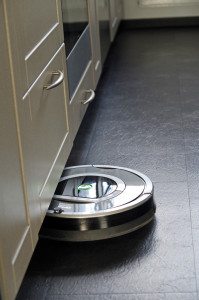 There is ten centimeters of space between the kitchen furniture and the floor - no problem for the robot vacuum cleaner.

In stark contrast to its performance: With just 35 watts, the Roomba does a decent job on loose dirt on hard floors and solid carpets, but it quickly fails on trodden and high floors.

The impression after the first trip: Roomba has tried hard, but it's not enough to be completely satisfied. A few crumbs in the kitchen and a few leaves from houseplants raise doubts about the care and calculation of the route.

Over time, trust grows: the robot vacuum cleaner runs every other day and thus ensures a good basic cleanliness. It takes one to one and a half hours to cover 70 square meters.

The conventional vacuum cleaner is used less often - I would estimate only half as often. And in the meantime, it never really looks dirty.

If you want to make the cleaning even more even, use the so-called "lighthouses". Simply put, these are light barriers that are placed in the door frame. The Roomba only drives through it after it has cleaned a room for a certain period of time. What works quite reliably in principle is likely to be problematic in households with small children or animals: the little "door guards" move too easily or can be used as toys.

I only let Roomba drive when I'm out of the house. The volume is kept within limits, but reading or listening to music is hardly possible at the same time.

The robot almost always finds the charging station independently. In contrast to models with a camera, however, it does not avoid obstacles, but drives "on contact". However, the shocks are cushioned and are gentle. Damage is as good as impossible.

Door sills and carpets are also usually no obstacles for the robot vacuum cleaner. Exception: deep black carpets. Here the Roomba can refuse entry and stop.

The sensors that keep him from going down stairs are to blame. You may interpret the black as an abyss. The only thing that helps here is testing: He masters two of my black carpets, but doesn't work with another. 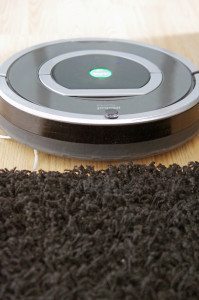 The robot doesn't like this high black carpet. He refuses the driveway and switches off.

In general, it is advisable to make the apartment “robot-compatible” before using the little helper: the Roomba sometimes moves chairs in such a way that it can no longer find a way out between the legs. So turn around and put it on the table. Shoes shouldn't get in the way either, otherwise there is a risk of getting caught in the laces. After all: in this way the robot helps to keep things tidy. 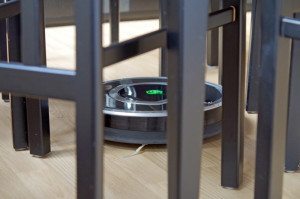 Trapped: the robot sometimes moves chairs in such a way that it can no longer find a way out.

Conclusion
According to Stiftung Warentest, an impressive 84 percent of the owners of robot vacuum cleaners are satisfied with the devices. I can agree with this result: robotic vacuum cleaners are more than just a gimmick. The gimmick category includes at most equipment features such as the programming option. Much cheaper and just as easy: start the robot manually shortly before leaving the apartment. You can even use the remote control.

The fact that the cameraless Roomba is apparently chaotic and takes longer than some competitors is irrelevant to me: After all, I'm out of the house during this time. On top of that, the cleaning effect improves the longer the device works.

A clear minus point, however: The problem with black floors can only be solved by removing the corresponding carpets or masking the fall sensors. This, in turn, is only recommended in apartments without stairs down.

With an output of 35 watts, the robot is neither suitable for large-scale plastering nor for vacuuming up spilled flour. However, it ensures basic cleanliness almost without any action from the owner. That makes it a "sensible gimmick" for me.

Steffen Heritsch is a guest author on the Energiedienst blog. He works as an editor for energy topics and project manager at the Trurnit Group in Stuttgart, a technology enthusiast and pedelec driver.

Are you interested in topics related to regenerative energy? We would be happy to send you new articles in the Energiedienst blog by email. Of course, this is free of charge and without obligation. Your data will not be used for any other purpose. You can unsubscribe from the newsletter at any time if you change your mind.