How often do you use the internet

This is how we use the internet 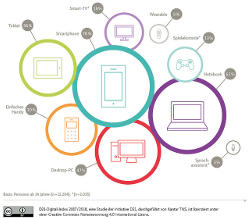 The D21 initiative is a network for the digital society. A report on the current situation of Internet use appears annually and brings interesting developments to light. The results are drawn from surveys of more than 20,000 people. We have the highlights of the D21 digital index 2017/2018 compiled for you.

The use of the Internet runs through all generations and has increased in recent years, especially among groups 40+ and 50+. 95% of 40 to 49 year olds and 87% of 50 to 59 year olds are online.
But there are also people who do not use the internet. These so-called "off-liners" are usually older people who state that they are not interested in using it. Overall are good 80% of all people in Germany online. 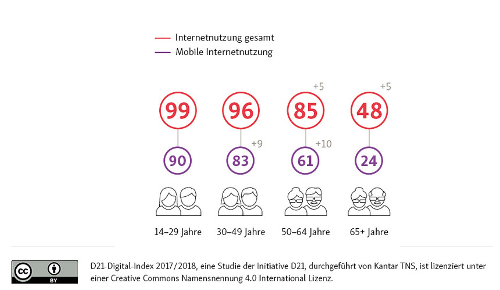 Mobile use of the Internet is still in vogue - especially via smartphones. No wonder given the high prevalence: Around 70% of the population own a smartphone. If you also use a smartphone and would like to receive tips on how to use it, take a look at our smartphone course!
The trend towards tablets, however, is falling. Only 36% of people in Germany still use a tablet. Other mobile devices such as fitness bracelets or smartwatches are not widely used. They only show a usage of approx. 5%.

The PC usage has been declining for years and is now just under 50%.

The Internet is used for all kinds of things: Finding information, videos for entertainment, using messaging services like WhatsApp, shopping or booking travel. Here the type of use differs particularly strongly depending on the age group.

Overall, however, 75% of people search for something via a search engine at least once a week. A good 40% still watch videos, for example on YouTube. No wonder that YouTube is one of the second largest search engines.

Social networks and media continue to be used very heavily. More than 50% of all respondents use at least one social platform - in the age group under 30 it is almost 100%. The most popular platforms are Facebook, YouTube, Instagram and Twitter.

Video calls are rarely used. Although some providers offer such a service for free, this technology is not used very often.

The entire study is available in PDF format. The graphics used here are published under the Creative Commons license and provided by D21. All graphics for viewing and free download are available here.