From Mexico all over the world 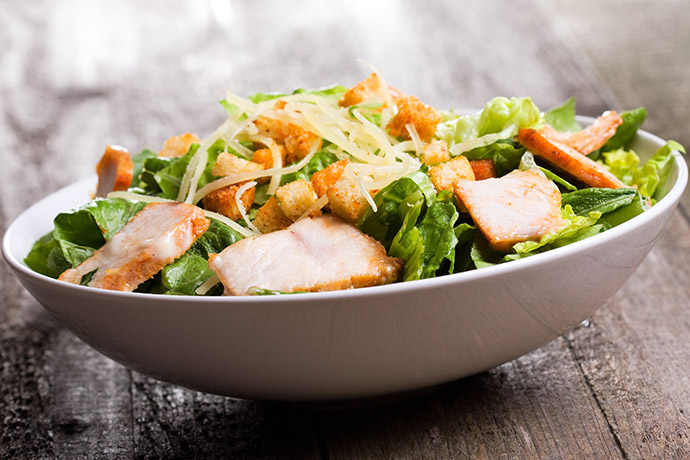 You thought that the Caesar salad, internationally famous and known from American cuisine, got its name from the Roman general Julius Caesar? Or from the Caesar’s Palace hotel in Las Vegas? Not even close! The origin lies elsewhere - in the hands of an Italian living in Mexico.

San Diego, California, in 1924: The working week was reduced from 60 to 48 hours, and free time was finally as important as work. Technology spread, cars, radios, and movies were extremely popular. The mood was carefree, the stock market crash and the beginning of the global economic crisis were still half a decade away.

Thanks to the dressing, the Caesar salad became famous

In the land where beer and schnapps flow ...

If only it weren't for Prohibition! The state-ordered, general alcohol ban for the whole country had been in effect since 1920. But the resourceful residents of San Diego found a way out of their "drought": Tijuana, Mexico, was just 16 km from the city center of San Diego. And so the thirsty between Seattle and San Diego went to Tijuana in neighboring Mexico to party and drink.

In the center of the Mexican city, on Avenida Revolución, the "longest bar in the world" was created very quickly. Hundreds of nightclubs, restaurants, and game parlors attracted thousands of Americans. Among them was the Italian immigrant Caesar Cardini. He liked Tijuana so much that he opened a small hotel himself - "Hotel Caesar" - with an associated bar and restaurant.

At the beginning just a snack with a drink

A couple of nuts weren't enough for the drinkers

It was very well attended from the start, and the alcohol, which is known to make you hungry, flowed freely. The obligatory nuts, which were always served with alcoholic beverages, were soon no longer enough for the drinkers. They wanted more, and so Cardini also worked as a cook. In his tiny kitchen, he cut crispy romaine lettuce and tomatoes. But only salad? That wasn't enough for him. He remembered La Mamma's aioli - and a sauce was created that later went around the world, the sauce for the famous Caesar salad.

Cardini mixed up a good serving of crushed garlic, chopped anchovy fillets, egg yolks, lemon juice, Worcester sauce, hot mustard, and a dash of oil. He thinned the creamy mass with vegetable stock to make it more fluid. After the first seasoning, he spiced it up with salt, pepper, cayenne pepper and a pinch of sugar - the dressing for his salad was ready. As a finishing touch, he sprinkled grated Parmesan over the green, all Italian.

What made the salad so famous

Caesar's guests were enthusiastic and from now on often ordered "Caesar salad please". Cardini's specialty got around quickly. He even invented a variant for cheese haters: instead of Parmesan, he sprinkled croutons roasted in garlic oil over his composition. Later, more and more variations were added, the Caesar salad became the main course and was served with chicken breast, avocados or shrimp.

What Cardini couldn't know: Alcohol drives electrolytes, i.e. salts, out of the body. If you eat something salty before or with alcohol, you will hardly have a hangover or even no hangover later. This is probably exactly what the composition of the sauce did - and maybe that's why the Caesar salad became so famous.