How are the moons of Neptune

As far as we know today, Neptune has 14 moons. The largest of these, Triton, was found just days after Neptune was discovered. That was in 1846. It was not until over 100 years later that Gerard Kuiper found a second moon, Nereid. This is eight times smaller than Triton.

During the visit of the Voyager 2 spacecraft in 1989, another 6 moons were found. But also in 2002/2003 the number of moons increased again. It is not possible to say exactly how many there are, perhaps you will discover more.

Triton moves about 355,000 kilometers away from Neptune. In between there are six other moons, of which Proteus is the largest. Nereid did not fit into the picture here, because she is 15 times farther away from Neptune than Triton. The five new moons, which were only discovered in 2002/2003, are even a lot further away (between 15 and 48 million kilometers!). 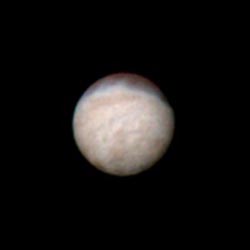 Triton has a diameter of 2707 kilometers. It orbits its home planet backwards, i.e. contrary to the usual direction of travel in the solar system, and requires 5.9 days for one orbit around Neptune. 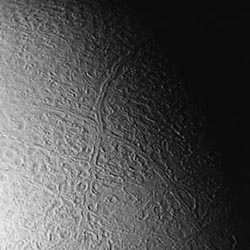 Triton has very few craters on its surface. This means that it was reshaped by some process, which made the crater basins disappear.

It may have been heated internally by the tidal forces of Neptune, which melted the ice on its surface.

This ice also consists in part of frozen methane and frozen ammonia and is covered with nitrogen hoar frost. Nitrogen and methane only exist as gases on Earth, but Triton is cold enough to solidify them. 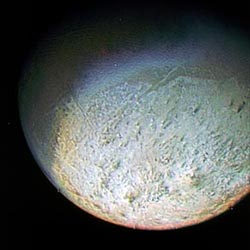 Triton is Neptune's only retrograde moon. This could suggest that he was once a member of the Kuiper Belt and at some point was attracted by Neptune's gravity and forced into orbit.

Triton's fate seems to be sealed in the fact that he is slowly getting closer and closer to Neptune and probably in many millions of years it will either break apart and form a ring around Neptune or fall on its surface.

Triton has the coldest surface temperature of any moons in the solar system. It is ice-cold -235 degrees Celsius! Even so, during their 1989 visit, Voyager 2 found geyser-like eruptions in which liquid nitrogen shot out of crevices in the ice. This is also called ice volcanism.

Triton got the name of the Greek god of the sea, who was a son of Neptune. 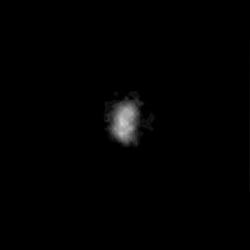 For more than a hundred years, Neptune was thought to have only one moon: Triton. The astronomer Gerard Kuiper found a second Neptune moon, Nereid, with his telescope in 1949.

With a diameter of 340 kilometers, Nereid is the third largest Neptune moon. It takes just under a year to complete one cycle. It has a very elliptical orbit. That means: sometimes it comes close to Neptune up to 1.4 million kilometers, sometimes it is 9.6 million kilometers away from him. That is a huge difference! Simultaneously the most elliptical orbit of all moons in the solar system.

The Nereids were sea nymphs, daughters of the ancient Greek sea god Nereus. 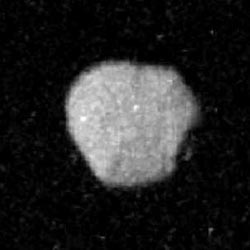 In 1989 the Voyager 2 probe passed the planet Neptune and took many photos. As a result, six new Neptune moons were discovered. The largest among them was Proteus with a diameter of about 420 kilometers.

All newly discovered moons move within the Triton orbit and circumnavigate the gas giant Neptune in just a few hours! Najad, Thalassa, Despina and Galatea are even still within the ring system of Neptune. Proteus takes 1.2 days to complete one cycle.

Proteus is almost spherical in shape, while the smaller moons are irregularly shaped and look more like meteorites. Despite their small size, traces of collisions with meteorites can also be seen on their surfaces, as they are littered with impact craters.

With the ancient Greeks, Proteus was a god of the sea.

In 2002 and 2003 another 5 moons of Neptune were discovered. They are comparatively tiny (between 28 and 60 kilometers in diameter) and make their rounds very far outside of Neptune. 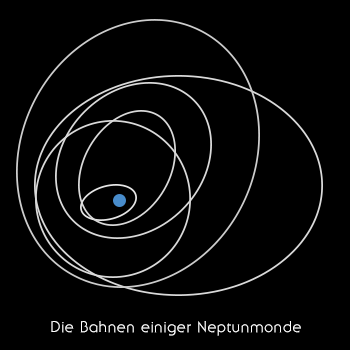 The outer moon takes over 25 years to orbit and moves away from its home planet by up to 72 million kilometers. This is a record in the solar system! From Earth to Venus it is only 38 million kilometers at their closest approach!

Their orbits are very eccentric. They are not all in the same plane and are also very elliptical, as you can see in the picture. They do not make circles around Neptune.

The smallest train belongs to Nereide. You can clearly see the strong elliptical shape.

The images on this page are from NASA (Courtesy NASA / JPL-Caltech).