Fast differs in many ways from starvation or a zero diet. There are some meaningful changes in metabolism that take place during fasting. This allows our body to use its nutrient stores as an energy source. 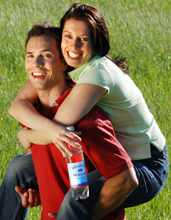 During the history of human development, food breaks and shortages often had to be overcome. Living from storage in times of shortage is therefore an elementary skill without which life could not have developed. Fasting in the sense of depletion is therefore a tried and tested and physiologically proven human program. In the history of development, some metabolic changes have been established that guarantee a constant energy supply. In contrast to this, today's constant availability and the abundance of food are a completely unfamiliar situation for humans from an evolutionary point of view, which causes clear problems. Fasting today is no longer bridging times of shortage, but rather a positive experience of renunciation in this affluent society.

Fasting is much more than not eating

Fasting doesn't mean just going without solid food for a few days. Drinking plenty of water and herbal teas, possibly with a small addition of honey, supplemented with small amounts of vegetable broths and grain decoctions such as rice gruel and now and then a small portion of fruit juice, yoghurt or buttermilk contribute to the success of the fast. In addition, numerous accompanying measures such as bowel care, liver compresses and appropriate physical exercise and relaxation help guide the fasting carefully through the fasting period. Since these accompanying measures are so important for the success of fasting, the first fasting experience in particular should take place away from everyday life - preferably in a fasting seminar.

What happens in the metabolism?

During fasting, the energy cycle of eating, i.e. nutrition from the outside, changes to the energy cycle of fasting, i.e. nutrition from within. The signal for the start of the fast and the metabolic switchover is the emptying of the gastrointestinal tract by the Glauber. Drinking dissolved Glauber's salt causes a sudden and extensive emptying of the intestines. The resulting drop in blood sugar levels leads to a decrease in insulin levels and increased levels of glucagon and adrenaline to be released. On the one hand, these hormones cause more fat to be released from the adipose tissue and an easier absorption of fatty acids in the muscle cells, which cover an increasing proportion of their energy consumption. On the other hand, they promote glycogenolysis: glucose is released in the liver from glycogen, the storage form of glucose. Almost at the same time, the liver also produces new glucose (gluconeogenesis).

However, the carbohydrate stores (glucose, glycogen) are limited. Because our body has mainly stored energy in the form of fat (see table). In contrast, our diet is composed completely differently and consists, for example, of a larger proportion of carbohydrates and less fat. In addition, the brain and some blood cells are only dependent on glucose. In fasting, the body is faced with the task of converting its metabolism from the more carbohydrate-based diet from the outside to the diet from the inside, which comes from the fat-oriented energy reserves.

Nerves want glucose as a source of energy

On the first day of fasting - and sometimes even on the relief days - the glycogen reserves in the liver and muscles supply the body with energy. While the liver's main purpose of glycogen is to maintain blood glucose levels, muscle glycogen is used to make muscles work. At the same time, fat is used very quickly as fuel, especially for the muscles, heart and kidney metabolism. In contrast, the energy for nerve cells, erythrocytes and leukocytes, i.e. red and white blood cells, is mainly provided by the glycogen in the liver. However, the carbohydrate supplies are limited and significantly reduced after the first day of fasting.

Even the fatty acids that are released from the fat reserves cannot be converted into glucose. That means, without a metabolic switch, a fast for several days or even several weeks would hardly be possible. This is why gluconeogenesis, the formation of new glucose, begins at the same time. It mainly consists of the building blocks of proteins, the amino acids, as well as glycerine (from adipose tissue) and lactate and pyruvate (mainly from the metabolism of erythrocytes and leukocytes). At the beginning of the fast, gluconeogenesis takes place primarily in the liver. The newly formed glucose is now primarily available to the nerve cells.

In addition to gluconeogenesis, another process is particularly characteristic of fasting metabolism: ketogenesis, i.e. the conversion of fatty acids into ketone bodies. Fatty acids cannot be converted into glucose. However, since there are more fatty acids available than the muscles consume, the fatty acids are converted into ketone bodies. These can be absorbed even more easily as fatty acids by the muscle cells and used to generate energy. They also have the pleasant side effect of reducing feelings of hunger. By the way, one of the ketone bodies is acetone, which is responsible for the typical fasting breath. In this way, it shows the experienced fasters that the metabolism has switched to fasting.

At the beginning of the fast, the brain uses up most of the glucose. His requirement is around 150 grams or 600 kcal per day. It is therefore responsible that a relatively large amount of amino acids must initially be provided for gluconeogenesis. On the first day of fasting it is around 80 grams, but after just a few days of fasting, the nerve cells also learn to use the ketone bodies, which are now abundantly available. The glucose requirement drops and a protein-saving mechanism occurs because fewer amino acids are now used for gluconeogenesis. In this way, protein breakdown decreases. The usual fasting intake of small amounts of carbohydrates through fruit juices and honey as well as protein, for example in the form of buttermilk, also contributes to the protein-saving mechanism. Even if the body consumes moderate amounts of protein while fasting, vital structures such as the muscles and the heart are not attacked. Unfortunately, this criticism is expressed again and again. Naturopathy even sees a positive effect through a low protein breakdown in the context of therapeutic fasting. Naturopaths and fasting doctors associate improvement in allergic diseases, increased blood flow and nutrient supply to the tissue, decline in various inflammatory parameters and thus less painful joint changes, among other things, with a relief of the protein balance.

It is important that the fast is carried out methodically correctly. Physical exercise and sport, adapted to the personal performance of the fasting person, are an important supportive element in fasting. Movement and relaxation in fasting have functional, emotional and social aspects. They strengthen the immune system, distract, improve regeneration and body awareness and stabilize the mood. Those who are active also keep the heart and circulation going, improve the protein balance and protect the muscles. In addition, the movement facilitates the metabolic change to an energy production from the fat stores and ensures an increased oxygen uptake, which is necessary for an increased fat burning. Those who are active also promote the excretion of acidic metabolic products. Exercise is also an excellent means of self-help for feelings of hunger and appetite, for chills and mood swings.

Almost all sports except for martial arts are also suitable for fasting, provided that individual circumstances such as the course of the fasting and training status are taken into account. However, the speed and strength requirements should be adjusted. Endurance-oriented forms of movement such as hiking, walking and cycling can be individually dosed and have proven themselves in fasting. Gymnastics and moderate strength training also have their place in fasting. With movement games, the competitive character, the intensity and the circulatory load can be reduced by slight changes: for example, playing badminton instead of badminton or volleyball with an inflatable water ball over a lower net. In addition to their sporting character, such games have a high entertainment and distraction effect, as well as a pronounced group dynamic effect. The relaxation character of movement also becomes clear in fasting. Classic relaxation methods such as breathing exercises, imaginary journeys, progressive muscle relaxation according to Jacobson and elements from yoga, Qi-Gong or Tai-Chi are an excellent enrichment of a fasting cure if properly introduced and instructed.

The supportive effect of physical activity on the protein balance and the muscles is shown very clearly in a study carried out over several years at the Charité University Hospital in Berlin on over 1000 people who are fasting. Overweight people who fasted for up to four weeks according to the Buchinger method were examined. Some of those fasting have completed extensive physical training at the same time: cycling (25 to 60 km daily) or comparable hikes as well as daily 30-minute strength and flexibility training. A control group, on the other hand, only had a light exercise program. Both groups were examined at the beginning and at the end of the fast. The focus was on endurance performance, i.e. the performance of the heart muscle and general muscle strength.

The analysis showed that even after four weeks of fasting, the trained fasters had more strength, more stamina and were more flexible than before the fast. An examination of different muscle groups showed an increase in strength between 10 and 90 percent compared to the initial examination. The performance of the heart muscle could be documented very well in the endurance performance. This was measured using a bicycle ergometer test. Those who had completed the additional training program showed an average improvement of 20 percent in endurance performance - and that after the fourth week of fasting! Fears that fasting would be harmful and weaken the muscles and the heart are therefore unfounded. On the contrary: strength and endurance can even be increased during fasting through a targeted exercise program.

The acid-base balance is relieved

Another change in fasting metabolism concerns gluconeogenesis. At the beginning of the fast, it mainly takes place in the liver, which synthesizes glucose and, as a by-product, urea: the latter is excreted through the kidneys. In the further course of fasting, the body needs significantly less glucose, as described, and therefore produces significantly less new one. In addition, some of the gluconeogenesis is shifted to the kidneys, which in addition to glucose also synthesize ammonia (NH3). This turns into ammonium (NH4 +) and helps to neutralize some of the metabolic acids that occur during fasting. This change contributes to a stable fasting process.

So it can be observed: Fasting stabilizes itself. The metabolic change described shows our body's extremely economical use of its energy stores, which it breaks down in a very differentiated manner. In this way, he spares life-sustaining structures and uses his reserves. And our health benefits.

The Association for Independent Health Advice trains Kompeenasten leaders and has developed a special concept for fasting courses.
You will find training and further education for fasting leaders here