Why does a higher resistance cause more heat

If, as in the iron, toaster or conventional light bulb, heat is generated by electrical current, then electrical energy is always converted into thermal energy.

In many cases one would like to reduce the conversion into heat as much as possible, because heat energy that is given off to the environment can no longer be sensibly used. That's why nowadays z. B. often so-called energy-saving lamps instead of conventional incandescent lamps. Conventional incandescent lamps only convert around 5% of electrical energy into light and around 95% into "useless" heat. 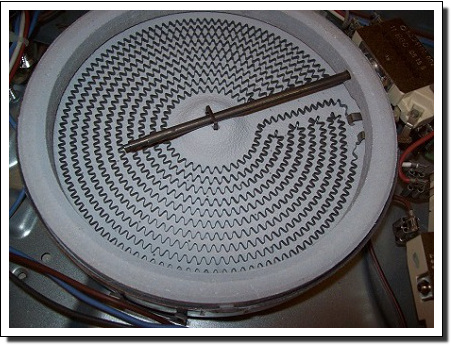 Picture: The inside of a ceramic hob hotplate. Is good to see
the long heating wire.

This is of course different with devices such as the iron or the electric stove. With such devices, the heat generated is not useless, but you want to use it. These devices are therefore specially equipped with an element that converts electrical energy as completely as possible into heat. In principle, the same thing happens in these heating elements as in normal electrical conductors - e.g. in wires.

Whenever current flows through a conductor, the conductor heats up. With the same current strength, different conductors (e.g. iron or copper wire) heat up to different degrees. The conductors, which heat up more, also conduct the current worse. It is said that they have a higher electrical resistance.

The electrical resistance can be thought of as an inhibition that the conductor exerts on the flow of current. The greater the inhibition, the worse the current is conducted - and the more heat is generated in this process.