How much is a Facebook page with over 300,000 fans worth? That depends on several factors - but above all, whether money can be made with the range in the end. Nevertheless, one could be puzzled if a successful German Facebook page is supposed to cost only 5,000 euros. OMR research shows how fraudsters offer potential buyers large pages with a reach of millions that they don't even own - and how they cash in that way.

It started a few weeks ago with a lead ad on Facebook: “Do you want a German FB page with 800,000 likes?” It says. If you are interested, you can leave your e-mail address so that you can be contacted by the provider a little later or call them directly. The Facebook page "FB-Fanseitenvermittlung", which is no longer available, acts as the sender. An informant, who has stored all communications with the responsible parties in screenshots from OMR, finds out which Facebook pages are supposedly for sale. He is well connected in the Facebook page operator scene and quickly realizes that something is wrong. 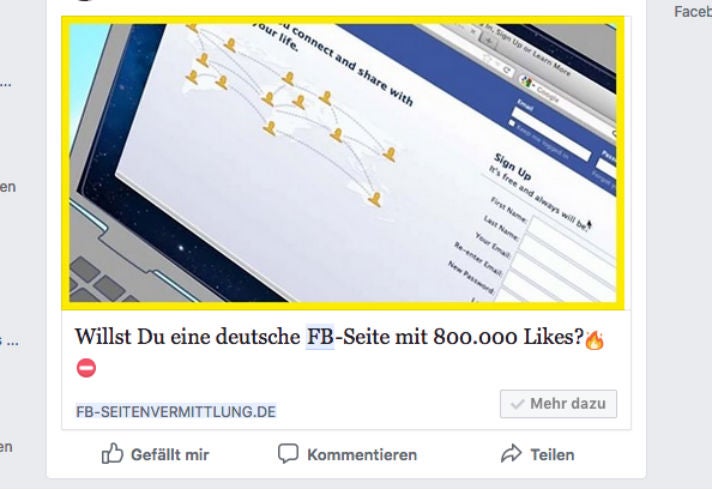 Anyone who reports on the lead ad is confronted with a "Josef Müller". He can be reached via a Swiss number and communicates with interested parties via email, Facebook Messenger or Whatsapp. Depending on what the topic is exciting, Josef Müller has the right page in his portfolio: Screenshots that are available to OMR show that the Facebook page “Fitness Facts” (308,000 fans) “is in a relationship with Spongebob ”(almost 400,000 fans),“ Fußball - Aktuell ”(213,000 fans) and“ Psychological facts ”(1.4 million fans). 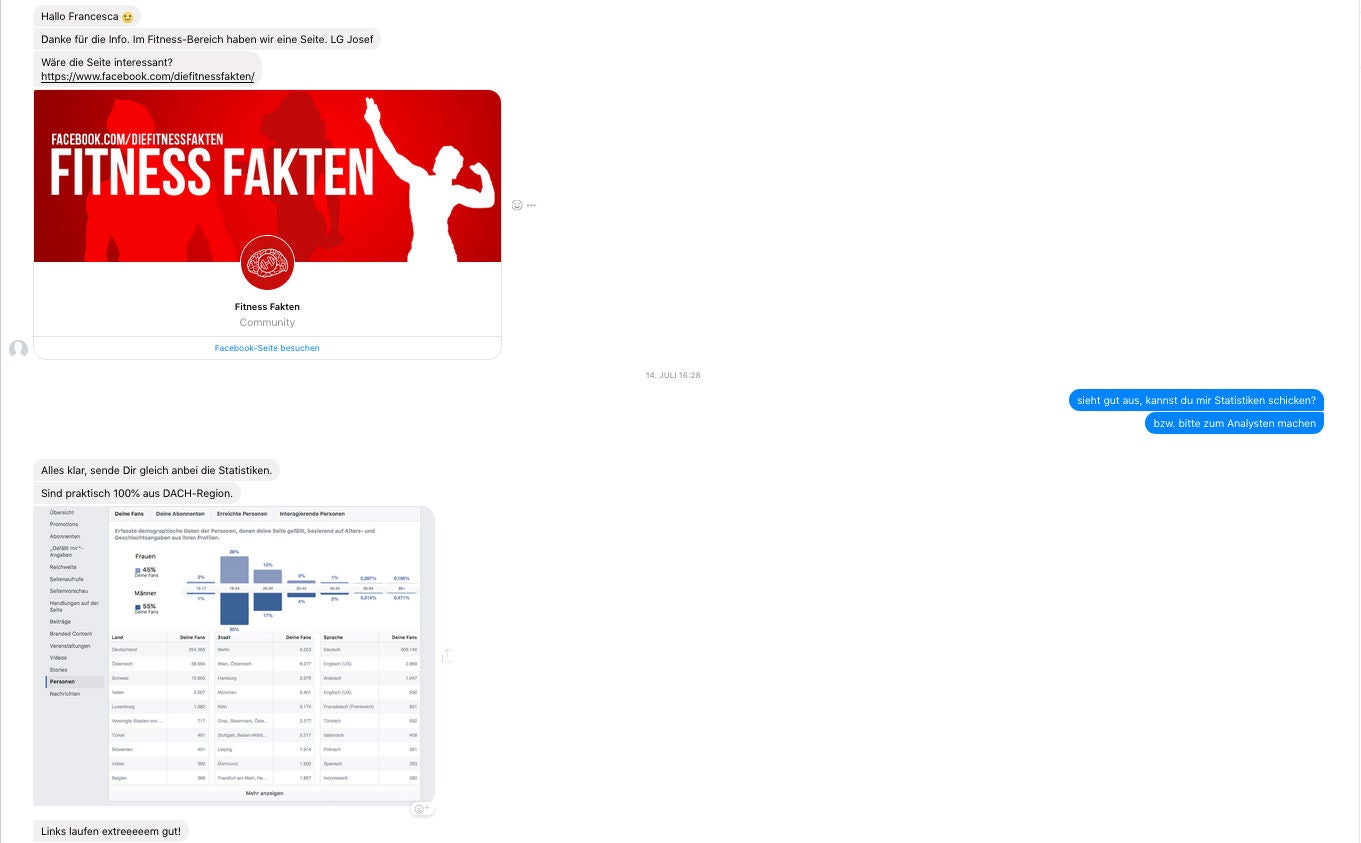 In the conversations via Mail, Messenger and Whatsapp, Müller poses as the admin of all these pages, but he now wants to sell them due to lack of time. He advertises, for example, with “is in a relationship with Spongebob” with a monthly income of 120,000 euros - via the affiliated shop. A current bid from another interested buyer is 19,000 euros - that would be an absurd bargain. The pages “Fitness Facts” and “Football - Current” throw together, according to “seller” Müller, 2,000 euros per month, which he would sell for 7,000 euros. For the largest page, “Psychological facts”, he asked for 27,000 euros in another interview.

The problem: It is relatively easy to understand that this Josef Müller is not the admin of the pages offered. OMR asked the operator of "Fußball - Aktuell", Sascha Fuchs, directly. He confirms that he had been contacted because a friend was offered the "Football - Current" page - by Josef Müller. However, he did not intend to sell the site and therefore filed a complaint against unknown persons. The assumption is that Josef Müller is not an admin on the other sides either. According to our research, the operator of “Fitness Facts”, the Swiss e-commerce shop Powerfood.ch, does not know anything about a potential sale. And even the anonymous makers behind “Psychological Facts” do not want to sell based on our information.

But what should the scam bring then anyway? OMR knows at least one case in which the audacity of Josef Müller paid off: Jasmin W. (name changed by the editorial team) is interested in buying Facebook pages and contacted FB fansite agency a few weeks ago. Josef Müller answers. This offers her "psychological facts" during the first WhatsApp chat. First, the page should cost 27,000 euros as described, in the negotiation it even goes down to 22,000 euros. After a down payment of 5,000 euros, she should become the editor, after paying the full amount, she should become the admin of the page. When she then pays the 5,000 euros via PayPal, all contact with the alleged Josef Müller ends immediately. Since then, Jasmin W. has been trying to get the money back from PayPal.

OMR has chat logs that show how the supposed page seller is doing. He asks first about the desired subject area. If his potential customer answers, he pulls a successful Facebook page out of his hat and lists the income. On request, he even sends screenshots of the page statistics. From various chat histories it can be seen that Josef Müller always sends the same statistics on user demographics - it is not possible to determine from which page these actually originate. The same screenshot can still be found in an advertisement on Ebay classified ads. Here the seller appears as "Fabian Schmid" from Berlin (the address given does not exist). In addition, Josef Müller sends screenshots of the performance of individual posts and images, which should show that Josef Müller is the administrator of the Facebook pages. It is unclear whether he tampered with the screenshots or obtained them in another way.

With such screenshots, "Josef Müller" wants to convince his victims that he owns the site.

During the further negotiation, Müller then tries to convince his victims to pay via PayPal. In order to appear serious, he'll send you an invoice. This is available to OMR. The invoice only contains the web address of the "FB fansite agency", the mail address of Müller, a telephone number that can no longer be reached and a non-existent address in Bern. There is no tax-relevant information.

The trail leads to Switzerland

So who is behind the presumed pseudonym Josef Müller, who could not be found by OMR either? Various clues point in the direction of a Swiss (name is known to the editors). He had stated that he was the owner of “FB fan page brokerage” and at the same time as the lead ads with the lock offers appeared, he was aggressively looking for buyers from Facebook pages in Facebook groups. Quotes from the contributions: "Brand-active German Facebook pages with 600,000 or 400,000 likes are available (bargain price)" or "The Facebook pages have German reach in the millions and can be taken over immediately". Another clue: A screenshot that "Josef Müller" sent to a potential buyer shows his entire browser window - including the bookmark bar. This is almost identical to screenshots that said Swiss recently posted himself on Facebook because he needed help with a problem.

The clearest indication, however, is probably a VAT ID that Josef Müller sent to an OMR informant during a negotiation. This is identical to the Swiss company's UID. In a lengthy negotiation, Josef Müller tried for a long time to enforce a transaction via PayPal. He is reluctant to accept a transfer after all - and after several non-existent UIDs, he reveals the UID of the Swiss. It cannot be proven whether he is really behind Josef Müller or whether the person does not exist. The Swiss claims that Müller is just an acquaintance and that he does not currently sell any Facebook pages himself. We'll watch to see if the ads that have been submitted by site owners bring even more to light.