Modern game systems in football: The 3-5-2 and how to train the game system

Modern football is developing and with it the way it is played. Always new arrangements and methodologies can be found and can be observed in the football training of numerous professional clubs. Modern game systems are usually first seen in English football, in the Premier League, or in international comparisons of national teams. Which factors characterize modern game systems and how can they be improved in training? We'll introduce you to 3-5-2.

The 3-5-2 is a dominant system. This means that the team wants to run the ball long and often in their own ranks. The focus is on the passing game and possession of the ball, but the counter game or quick switching can also be an advantage of the 3-5-2. 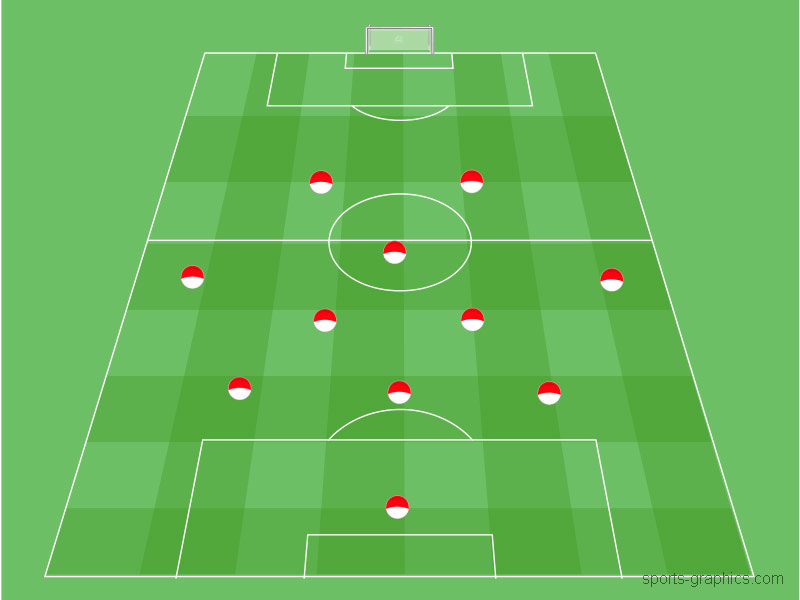 The 3-5-2 offers great variability in the structure of the game. Since the structure of the game is designed using a chain of three, the outside players can move up and thus create more space for the chain. In addition, since none of the sixes tip over into the chain, there is a play point in the center. An effective means in 3-5-2 is to play into narrow spaces within the center, as there is an excess there and from there a variable continuation of the game is possible. Here, rapid shifts or an allusion to the outside lane are opportunities to continue playing. Modern game systems like the 3-5-2 are designed so that wingers force 1 on 1. The aim of this idea is to lure the opponent into double situations, but then to play yourself out of these and thus to be able to create a majority yourself.

In the game against the ball, the 3-5-2 offers great flexibility. It can be defended with a chain of 3 or 5, or a pendulous chain of 4 can be played. The direction of the defense depends on the strengths of your own players and the opposing team. Modern game systems are mostly based on the fact that they can be quickly and flexibly adapted to the opponent in the game.

In professional football, the 3-5-2 game system can be seen, for example, at Borussia Dortmund, Manchester City or the Italian national team under Conte.

Modern game systems: weaknesses of the 3-5-2

What types of players are necessary to play the 3-5-2?

So that the characteristics of the 3-5-2 game system described above can be implemented, the training plan should include the following focal points:

The creation of chances to score plays an important role in this modern game system. Furthermore, the training should deal with the opening of the game via the 3-chain. Another focus is the passing game. A high quality of the passing game must be assumed so that the decisive passes arrive in a targeted manner under pressure and there are no ball losses in the build-up of the game.

Form of training with a focus on passing

Organizational flow: The 4 bowl hoods are set up in the form of a square. 4 teams of 4 players each play in this square - 2 teams are in possession of the ball and must hold the ball together. 1 team must conquer the ball, the 4th team stands outside the square on the sides and serves as a pass station for the team in possession of the ball. The goal of the team in possession is to play 12 passes among each other, because then the goal may be attacked. The defending team should prevent this. If the ball is intercepted, the team that made the mistake must go to the center. 2 ball contacts in the center are allowed, outside it is played directly. The team that acts as a player is changed after 3-4 minutes.

Training material (with links to the products):4 bowl hoods | 4 different colors on bibs (4 each in one color) | Enough balls

Notes and tips: Above all, the coach should pay attention to a clean passing game, quick action and free-running behavior.

Variations of the exercise: