Why is my chair always green

Bowel movement color: what it tells us

Bowel movements: what is normal?

A varied and balanced diet ensures healthy and "normal" digestion. But what is a "normal bowel movement" anyway? A question that medical professionals find difficult to answer. From a medical point of view, bowel movements have a lot to do with feelings and individually different perceptions.

"The answer to the question 'What is normal?' covers a relatively large range - from three times a day to three times a week, "says Prof. Dr. Stephan C. Bischoff, specialist in gastric and intestinal diseases.

After you have eaten, you will inevitably (sooner or later) have a bowel movement. Since bowel movements say a lot about our health, you should take a look every now and then to check whether everything is okay.

Of course, in addition to diet, other factors also have an influence on digestion and the color and consistency of stool, such as exercise, stress and medication.

Every person has a different bowel movement, so there is no general indication of what is "normal". The color and consistency of bowel movements are influenced by a number of factors.

How is the chair made?

Digestion is responsible for this. This begins with the consumption of the food and ends with the excretion of the faeces. Our digestive system runs like a long tube through our body.

In the mouth, the food is broken down by the saliva, and swallowing transports the pulp through the esophagus to the stomach. This is a muscle that can expand depending on the filling. Here the chyme is now mixed with stomach acid. The food is then further thinned by wave-like movements of the muscle.

The next station is the small intestine. In the area of ​​the duodenum, the nutrients we need are broken down into carbohydrates (sugar), fat and protein by enzymes from the pancreas and bile. But not only the intestines have to work now, the liver is also used properly: It separates the pollutants from the nutrients, which are then transported throughout the body via the bloodstream and lymph cells. Now they are available as a building material or energy supplier.

The undigested food residues, especially fiber, move on to the large intestine. Here water and minerals are withdrawn, but this also creates gas. However, only a small part of it is excreted as pup, the majority is absorbed into the blood through the intestinal wall.

What's left of the food now? "Waste", or excrement, which is now collected in the rectum until the stretch receptors in the intestinal wall give the brain the signal to excrete.

The digestive system absorbs all the components that the body can and needs from food - the rest is feces and is excreted.

So what is a bowel movement?

The feces are everything that the body couldn't use. About 75 percent of it is still water, the rest is undigested food, intestinal secretions and bacteria, and colorants from the bile. Most stools are brown in color. He gets this from the substance Sterkobilin, which is created when bile is broken down in the intestine.

But the color can also be yellow, gray, red, green or even black - the color and shape of the bowel movements depends heavily on the diet. So as long as the discoloration does not persist, this is not a cause for concern. Beetroot, spinach, pumpkin & Co. can color the stool a little more colorful.

The normal consistency of the feces should be soft, yet shaped. So the waste product can comfortably leave the body. The consistency of bowel movements is also influenced by how much fluid and fiber the body gets from food.

How much stool is excreted (and how often) is different for each person. An average guideline is around 100 to 300 grams per day. With a very large meal, it can sometimes be a whole kilogram!

Feces are what remains of the food ingested after digestion. The color and shape of bowel movements can be changed by certain foods. 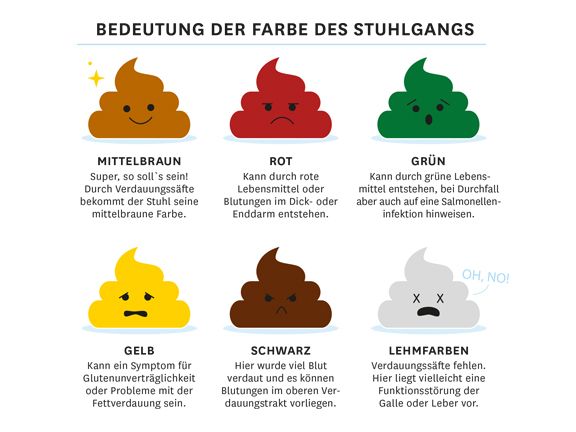 What is wrong with a bowel movement?

Even if it is not always the perfect sausage, not every deviation is a cause for concern. Undigested food in the stool or mucus on the stool can be quite normal. The mucus is produced by the intestine itself, for example, to make it easier to pass out.

However, if the changes in stool color, consistency or smell persist over several days, this should be clarified with a doctor. Here are some examples of what a bowel movement can look like and what could be behind it.

Green chair: If the faeces are greenish in color and accompanied by severe diarrhea, this can be a sign of a salmonella infection.

Black chair: With this color of stool, a lot of blood may have been completely digested. This blood mostly comes from the upper digestive tract, i.e. esophagus, stomach (mucous membrane) or duodenum. Here it should be clarified whether there is any bleeding in these areas.

Red-brown stool / blood in the stool: If the stool color is red-brown, there is usually bleeding in the upper large intestine. If the feces are marbled reddish brown or streaked with blood, the bleeding is more likely to occur in the lower colon. If the stool is covered in white blood, the cause is more likely to be in the large intestine or rectum. These can be hemorrhoids or small fissures. Occult blood is invisible blood: If this is excreted, it is a symptom of various diseases of the gastrointestinal tract. This can only be determined via a stool sample and is part of colon cancer screening.

Gray and clay colored chair: Since the stool is colored brown by the substance Sterkobilin, a gray-clay color indicates that there is a malfunction of the bile or liver. However, it can also be a symptom of a pancreatic tumor.

Thin, long chair: If the faeces often come out in noticeably thin and long or ribbon-like form, this may be due to a narrowing of the intestine. This can be caused by tumors in the colon, adhesions, or colon polyps.

Diarrhea: If the diarrhea lasts for several days, it is already dangerous for the body as it can lead to dehydration. This should also be clarified with a doctor. Infections with bacteria or viruses as well as parasite infestation can also be the cause and should be determined using a stool sample. If the stool color is green, this can be an indication of a salmonella infection.

Constipation: Long-term constipation should also be clarified with the doctor. Although the reasons for this may be too little exercise or an improper diet (too little fluid or fiber), other diseases can also cause constipation: irritable bowel syndrome, intestinal weakness or even a pathological narrowing of the intestine due to tumors, adhesions or scar tissue.

Fat stools: Since the fat is processed from the stool during digestion, there should be no more fat in the feces. But if it is shiny, sticky, smeared or foams, there is a problem with fat digestion. This could be due to inflammation of the pancreas or gallstones. But it can also be a symptom of gluten intolerance.

Stink:Although the stool always smells and can change in smell, depending on the meal, a persistent, extremely unpleasant, acrid or putrid stool of the stool can indicate a digestive disorder. This can be due to various diseases, such as celiac disease, Crohn's disease, cystic fibrosis, a tumor or inflammation of the pancreas.

If the stool color, consistency or smell has changed significantly over several days and may cause discomfort, possible illnesses should be clarified with a doctor.

The Bristol Stool Shape Scale was developed by Kenneth Heaton and S. J. Lewis to guide bowel health and classifies seven different stool shapes. If the digestion is in good shape, type 3 or 4 will come out during bowel movements. Types 1 and 2 indicate constipation, types 5 to 7 indicate diarrhea in varying degrees of intensity (1).

Flatulence does not have to be an indication of a digestive disorder, it is even part of a healthy digestive system. The intestinal gases produced during digestion can build up and cause a bloated feeling.

"Intestinal bacteria form gases during their work, up to 15 liters per day. These leave the body rather inconspicuously. If the amount goes beyond this, more gases are released, we have gas, to put it more elegantly: flatulence. Some people are more sensitive to their own intestinal gases or feel pain. Doctors call this phenomenon of 'jammed gases' meteorism. "

However, certain food intolerances can also be responsible for the flatulence. If flatulence occurs frequently or for a long time, this should also be clarified with a doctor. Anyone who eats too quickly or consumes a lot of carbonated drinks can also get discomfort.

A changed bacterial colonization can also lead to gases not being transported away and thus triggering pain. This can occur after taking some medications or as a result of food intolerance.

Flatulence is part of healthy digestion, but if it occurs frequently, persistently or with severe symptoms, it should be clarified with a doctor.

Knowledge to take away

Every person has a different bowel movement, so there is no general indication of what is "normal". The color and consistency of bowel movements are influenced by a number of factors. The digestive system absorbs all the components that the body can and needs from food - the rest is feces and is excreted. So feces are what remains of the ingested food after digestion.

The color and shape of the bowel movements can change due to certain foods. If the stool color, consistency or smell has changed significantly over several days and may cause discomfort, possible illnesses should be clarified with a doctor - also in the case of frequent flatulence.