Which currency is used in Germany? 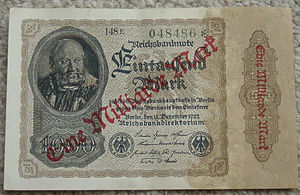 During inflation, the value of money fell so quickly that the bills were simply overprinted with the new value. Here, a thousand-mark note became a billion-mark note.

The German currency today is the euro, i.e. the same currency as many other European peoples. The euro has been in place since 1999. Before that, Germany had its own currency. This money had different names and worked in different ways. Germany did not have a common currency until 1871.

For centuries there were many different states in Germany. They had their own currency or joined a foreign currency. Depending on their value, the coins had designations that we know today from proverbs: Heller, Pfennig, Deut, Kreuzer, Groschen or Batzen. The Reichstaler has existed since the beginning of modern times, around 500 years ago. Such a thaler should contain a certain amount of silver. However, the coins were minted by the individual states, not by the Holy Roman Empire. That's why they looked different. They also contained less and less silver.

Since 1871 Germany was one country, the German Empire. Soon a new law determined what kind of currency to use. The money was named Mark. In the Middle Ages, that was already a unit of measurement. For one mark there were 100 pfennigs. The value was based on gold.

After the First World War, the money was hardly worth anything: the state had issued more and more banknotes and coins. There was so much money that you could hardly buy anything valuable for it. Such a drop in value is called inflation. That ended in 1923 with a new central bank and a new currency, the Rentenmark. Shortly afterwards the Reichsmark was added.

After the Second World War, the Reichsmark was no longer worth anything. That is why people exchanged goods for other goods, just like in the past, when there was no money. Much could only be got on the black market. There was even a so-called cigarette currency. That means that back then cigarettes were used like a kind of money. In 1948 the Western powers (USA, Great Britain and France) introduced the D-Mark in their zones of occupation. The banknotes were printed in New York and then secretly brought to Germany in boxes. Everyone got 40 marks as an entry fee. Suddenly there were all sorts of things to buy in the shops again. This is seen as the beginning of the German economic miracle.

The Soviet Union, however, did not allow the D-Mark in its zone of occupation. That is why there was the GDR mark in East Germany from 1949. But this was worth less than the D-Mark. That is why D-Mark was often secretly traded in the GDR, because things could also be bought with them that were not made in the GDR. In 1990, before reunification, the GDR mark was abolished. From this point on, the D-Mark was the currency for all of Germany. Since the introduction of the euro, Germany no longer has its own currency.

There are also other search results for “German currency” from Blinde Kuh and Ask Finn.