Live blog: As soon as there is new information about Facebook Messenger and new app versions and / or features, we will update this post.

Restriction of the Facebook Messenger API as of December 16

Following restrictions in Messenger Advertisement, further functional limitations in Messenger itself will follow in mid-December. Here, too, Facebook cites the reason that European data protection regulations should be complied with. These changes will affect some API and UI components for the following audiences:

The following functions are affected:

As of December 16, the following functions will no longer be available in Facebook Messenger:

In concrete terms, this means that the scope of functions of the messenger is restricted and dialogues must now be conducted with text elements and links. In particular, the loss of the ability to send videos, audio or documents and to receive them from users severely limits the interactive elements in the dialogue with customers, fans and interested parties in Facebook Messenger. In this case, direct links to the respective media content must now be sent temporarily as an alternative.

MessengerPeople customers can add their media content as before, as we take over the storage (hosting) of the media. A clickable link to the respective media content is displayed to the end customer after it has been sent.

The other restrictions - apart from the changes to media dispatch relevant for MessengerPeople customers - can be found in detail in the blog post by Thomas Hutter or technically focused in the post on the Facebook Developers blog.

Starting in December, Facebook will be deactivating certain ads, audience options and metrics for ads that are delivered to and from Europe due to new data protection regulations in Europe.

Affected are the selection of conversions or leads as the target metric of the campaigns within the scope of the target “news”, “traffic” or “conversions” in the advertisement manager. In addition, it is no longer possible to use message templates for lead generation in Messenger until further notice and the important "sponsored messages" are also paused until further notice.

Until Facebook implements the data protection measures prescribed by the GDPR, it only remains to fall back on "softer" goals in the application. However, since the algorithm is designed for clear signals from the user, it must be expected that the alternatives mentioned will not be as successful as before. It remains exciting! 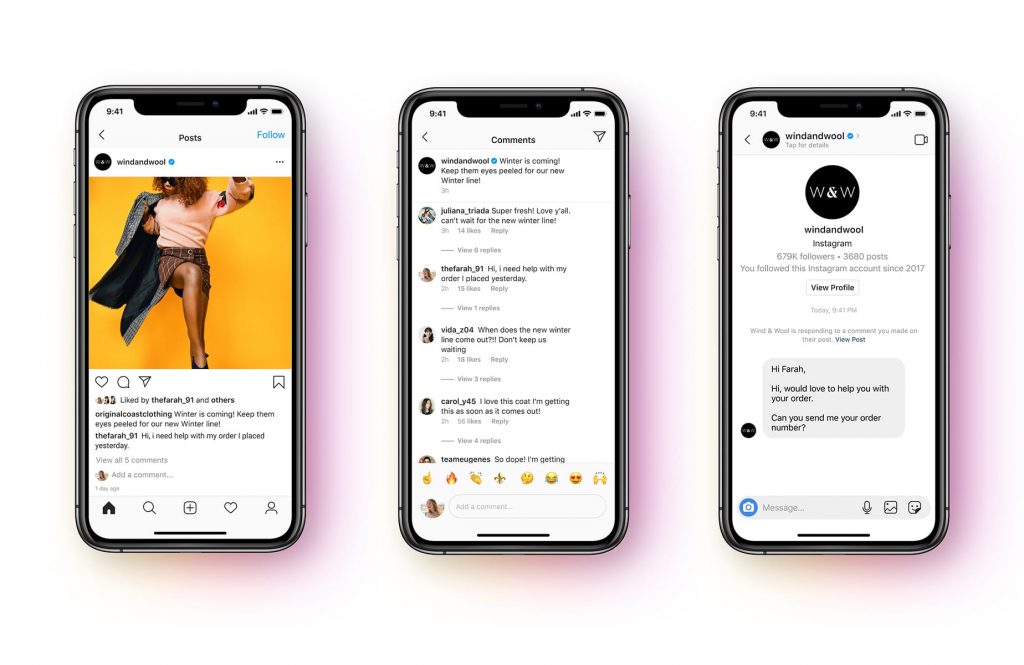 The background to the opening of the Facebook Messenger API for Instagram is the intended increasing dovetailing of the two apps in the messaging area as well as the other members of the Facebook family of apps, so that one day companies and customers can talk to each other across all channels.

In the past year, the number of daily conversations between people and companies on Messenger and Instagram increased by over 40 percent.

As announced by Facebook, the new Messenger API will support automated responses on Instagram for the first time. The company opened the messenger platform to chat bots back in 2016 and is now looking to speed up response time on Instagram by giving companies the ability to pre-qualify automatic responses to some of their most frequent incoming requests. Customers, on the other hand, value companies' ability to react quickly and problem-oriented.

This means that first level support chatbots, for example, will soon be used in customer communication on Instagram between companies and customers, which ultimately strengthen personal communication and advice to customers on more complex issues and, overall, contribute to customer inquiries being processed faster because after a request has been pre-qualified, they hand it over to a human colleague.

The opening of the Messenger API for Instagram also enables companies to map access to customer conversations within applications in their daily workflow, such as Customer Relationship Management (CRM) systems. This means that messages from a customer could be displayed alongside their order history, for example.

Finally, with this update, the messaging functions of Facebook Shops will also be integrated into the Messenger API, so that companies can create more appealing and sales-promoting customer experiences.

The updated Messenger API is currently available to select developers and companies including Adidas, Amaro, Glossier, H&M, Michael Kors, Nars and Sephora as part of a BETA program.

At the beginning of last year, Facebook CEO Mark Zuckerberg presented his vision for the Facebook Family of Apps: building a data protection-focused messaging and social networking platform. Yesterday it became known that Instagram will integrate some functions of the Facebook Messenger for its direct messages. After a few attempts to upgrade Instagram's direct messaging (including testing its own messaging app in the past), Facebook has now found a solution to connect Facebook Messenger and Instagram.

In addition, 10 new functions are integrated into Instagram Direct, which come from Facebook Messenger. With over 1.3 billion users, FacebookMessenger is the second largest messenger worldwide after WhatsApp with over 2 billion users.

In addition, users will in the future have the opportunity to jointly watch videos across all apps on Facebook Watch, IGTV, Reels (coming soon), TV shows, films and more during a video call.

In terms of privacy and security, both apps will also introduce new features. With the new update, users of both apps receive additional individual control options to manage their own privacy. For example, users will be able to check whether message requests should be sent to their chat list or message request folder or whether they want to receive them at all.

In addition, Facebook provides every user with tools that they can use to report suspicious activity and take measures to block dubious users across apps and / or to stop unwanted messages and calls.

The spread of false information, etc. is a strong focus of the Facebook Group in 2020. Already introduced in WhatsApp, the forwarding of content is now also limited to 5 contacts or 5 groups on Facebook Messenger.

Limiting redirects is an effective way to slow the spread of viral misinformation and harmful content that has the potential to cause harm in the real world.

Page messages are integrated into Messenger

Facebook is continuing to work on its blue messenger app and now enables side messages (messages that users send to companies via Facebook Messenger) to be received and sent directly in Facebook Messenger. As a screenshot found on Twitter shows, it is easy to switch between the respective accounts. 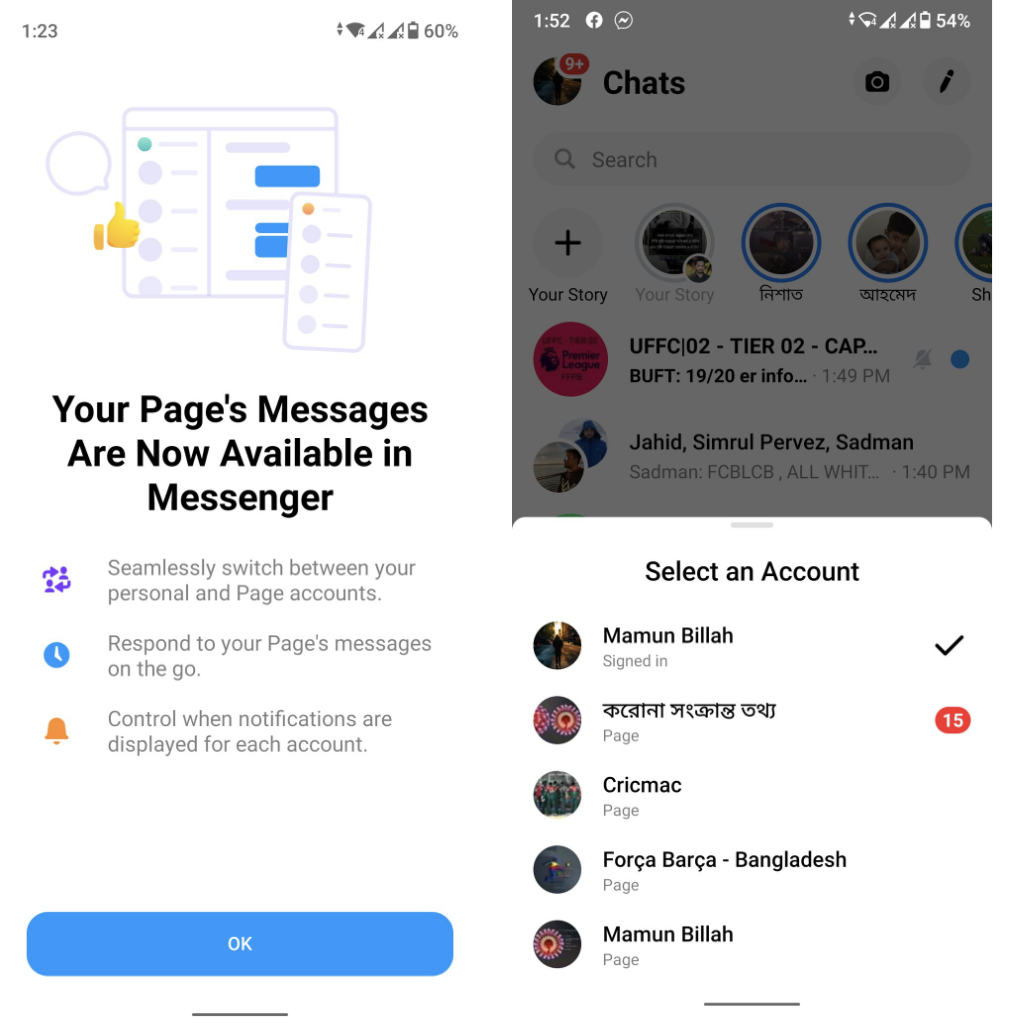 Conclusion: This update is certainly a big plus for users with a low volume of messages, but this function will hardly be used in large companies. For the scalable processing of hundreds or thousands of messages per week, companies should rely on a user-friendly messaging ticket system to ensure a seamless and positive customer experience.

Already announced in 2019, the integration of the message function of the popular social network app Instagram and Facebook Messenger planned by Facebook will now begin. The global rollout is currently underway and users receive a pop-up notification when they open Instagram in which the merger is announced along with other small updates (see screenshot). Users are also offered the update directly via click, which promotes rapid dissemination. 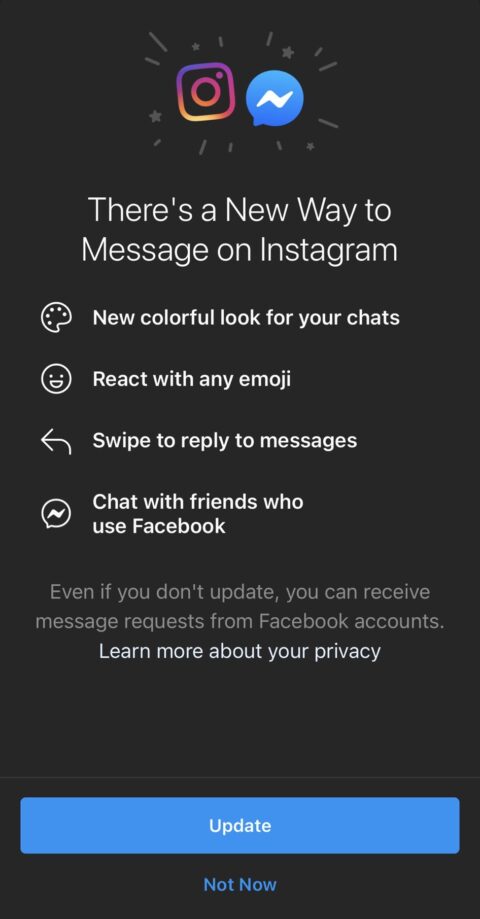 Users do not necessarily have to activate the new messaging experience, they also have the option of rejecting the update - at least for the time being. If you activate the update, in addition to a changed design, which is heavily based on Facebook Messenger, you also have the option of being contacted by Facebook users via Facebook Messenger without having to have Instagram installed. However, it currently does not seem to be possible (yet) for Instagram users to be able to contact Facebook users.

Conclusion: An important and logical step on the way to the planned full integration of Facebook Messenger, Instagram and WhatsApp.

This guest user can start the dialogue on the basis of a temporary Facebook account, which gives him the opportunity to receive and send messages. Such Facebook Messenger chats for “guests” end when the user decides to end the conversation via the “More” menu or 24 hours after the conversation started. The guest name appears as “Guest” followed by a short numeric string.

If the company tries to send a message to this guest user after the guest accounts have been terminated, it will display an error message: "This person cannot receive messages: This person is not currently receiving messages from you." The transcript of these Facebook Messenger chats for "guests" remains in the guest user's browser for up to 24 hours. However, even after the chat is over, companies keep a copy of the conversation in their inbox until they delete it.

Since June 16, 2020 Facebook rolls out the update on more and more Facebook company pages. The picture shows what the Facebook Messenger Customer Chat plugin looks like with the new guest mode. The FB Messenger Chat Plugin is "customizable", which means that you can, for example, match the color to your own CI. Companies can control the following steps in relation to guest mode:

With the opening of the FB Messenger Customer Chat Plugin, Facebook Messenger takes a decisive step towards opening it up to users without a Facebook account and thus towards a greater reach.

Until January 15, what we know from WhatsApp also applied to Facebook Messenger, namely the so-called 24-hour service window. This means that within this time, companies were able to react to a customer message and thus stay in contact with their customers promptly via messenger.

After the 24 hour window, companies were allowed to send a single message to customers. This “24 + 1 option” for companies to remind their customers (“re-engagement message”) was abolished on January 15th. One reason for this, according to Facebook, is that customers expect a faster response from companies. 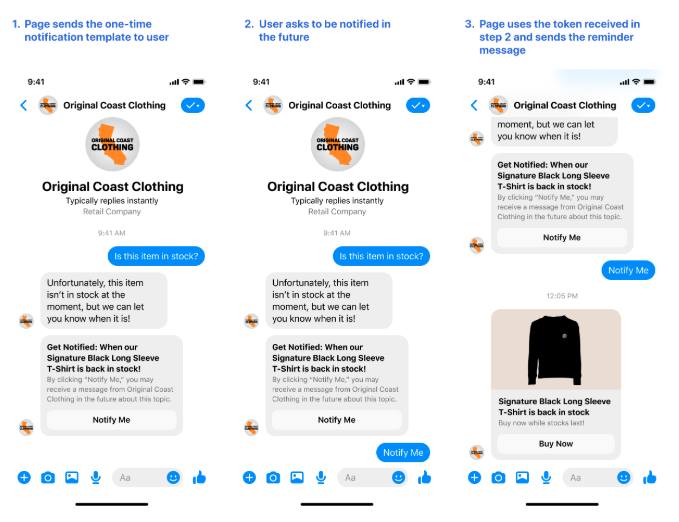 Instead, Facebook Messenger has now introduced the One-Time Notification API for businesses. This means that companies can contact their customers outside of the 24 hour service window by means of a “follow-up message”, as they were already allowed to do with the 24 + 1 rule.

The decisive difference is that companies with the One-Time Notification API will in future be able to send their customers automated follow-up messages.

A customer is interested in a piece of clothing that he saw in an online shop. Since it is currently out of stock, the shop suggests the customer via Messenger to notify him when the product is back in stock.

Overall, the one-time notification with the follow-up message to the customer promotes the interaction between the company and the customer. All changes and Facebook Messenger updates are always aimed at continuously improving engagement and the user experience.

According to a report, Facebook is currently working on a Face ID login for its messenger, among other things. Screenshots show a preliminary version, but for the Android version of the Facebook Messenger and not for the iOS version. Other messenger apps such as WhatsApp Messenger or Telegram Messenger already offer this type of login.

For these types of privacy features, we would use the face id-type settings already present on the device, not our own version. https://t.co/nEvnfiFQmx

According to a Facebook employee, if this security feature were introduced, the Face ID settings of the respective end device would be used, which in turn significantly reduces the workload for Facebook.

Because many messenger providers need even more time, the update for the newsletter (we reported on September 24, 2019: "Subscriber messaging (newsletter) is limited to verified news sites") will not be available on January 15 as planned, but on 4th of March in force!

This is reported by Facebook on their Developer Platform ->

Postponement: Companies still have until March 4th to switch their newsletters (subscriber messaging) to Facebook Messenger 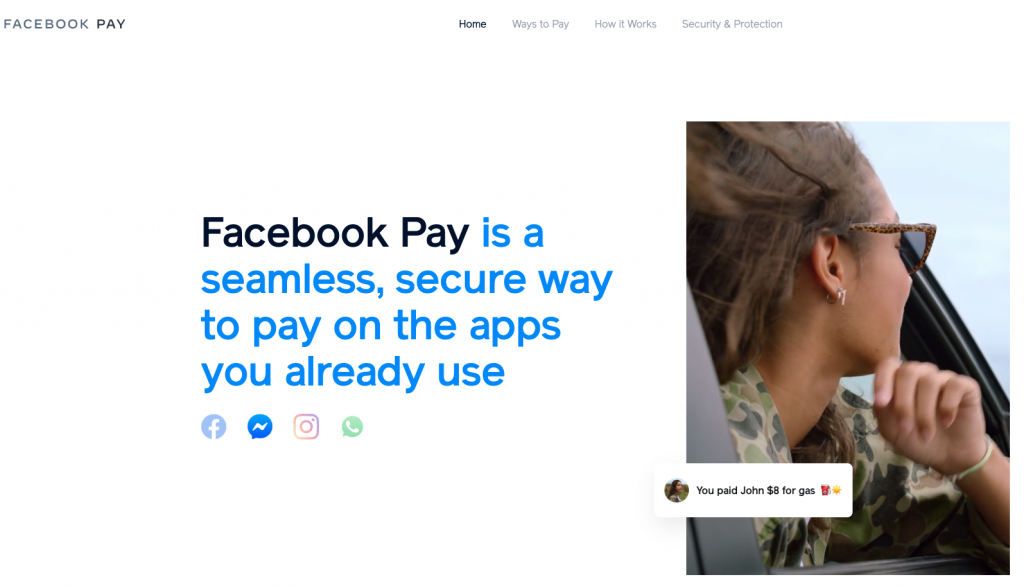