A big belly puts you at risk of diabetes

Access to the specialist information exclusively for members and subscribers is now activated for you.

Around every second person who is very overweight will sooner or later develop type 2 diabetes. Inflammatory mechanisms are increasingly being discussed for the development of diabetes. Because the fatty tissue releases a number of messenger substances that promote inflammation. 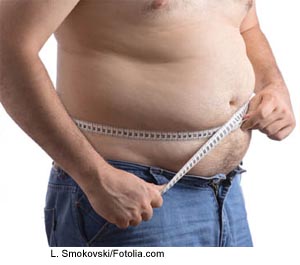 The first figures from the National Consumption Study have been on the table since the beginning of 2008. The latest data for German adults show that around 66 percent of men and 51 percent of women carry too much weight with them. Around one in five is currently already considered obese, and the trend is rising. Obesity is associated with a number of negative health consequences. What is particularly striking is the close connection between body weight and the development of type 2 diabetes. Compared to lean controls, men and women with a BMI of 30 kg / m2 a 40- to 80-fold increased risk of diabetes. About seven percent of the German population have type 2 diabetes, which is the most common chronic metabolic disease in adults. The frequency increases significantly, especially after the age of forty. In addition, one must assume that the rate of undiscovered diabetes cases is about as high.

It all depends on the distribution of the fat

The pattern of fat distribution is of particular importance for disorders in glucose metabolism. Especially if you are moderately overweight (BMI between 25 and 29.9 kg / m2) the fat distribution largely determines the risk of complications. This correlates relatively well with the size of the fat deposits in and around the abdomen. One speaks of the so-called male or android fat distribution type, which, in contrast to the gynoid pear type of women, is also known as the apple type. Clinical studies show that increased waist size is closely linked to the metabolic (blood sugar) and cardiovascular (heart attack and stroke) complications of being overweight. The reason is the special metabolic properties of the fat cells in this area. For example, they have a higher capacity to release fatty acids.

A frequently cited study shows that the heart attack rate is particularly high with a combination of obesity and diabetes. The abdominal fat mass can be easily recorded with the help of the waist circumference and assigned to a risk. It is noteworthy that the waist circumference is to be regarded as an independent risk factor for cardiovascular complications and metabolic disorders, regardless of the BMI. However, this also means that even with a (still) normal BMI, there may be an increased risk. Since men have an abdominal fat distribution pattern much more frequently than women, they are also more at risk than women with the same BMI and require much earlier and more intensive treatment.

The central feature of disorders of glucose metabolism is insulin resistance. This resistance means that, among other things, insulin is no longer able to allow blood glucose to pass into the cells. In turn, the body fat mass is a strong influencing factor (predictor) for insulin resistance. The exact connection between obesity and diabetes is still unclear. However, recent studies show that activation of the immune system seems to play a central role. A number of studies show a clear connection between inflammation markers in the blood and glucose tolerance disorders. Signal molecules of the immune system such as the cytokines interleukin 6 (IL-6) or the tumor necrosis factor alpha (TNF-) are measurably increased in the blood of overweight people.

These changes are characteristic of type 2 diabetics; that is, they do not occur in type 1 diabetes. Other inflammation indicators can predict the development of type 2 diabetes mellitus with relative certainty. These include increased levels of other cytokines, but also an increased number of leukocytes, an increased fibrinogen concentration or a decreased serum albumin. The more of these inflammation indicators that are above average, the higher the likelihood that type 2 diabetes will develop. This can be derived from a large epidemiological study in the Augsburg area. The insidious thing about all these changes in blood parameters is that they cannot be compared with the usual known signs of inflammation such as swelling, reddening, overheating or pain and therefore may not be noticed for many years. Rather, one speaks of a so-called low-grade or subclinical inflammation in this fading process. The doctor should, for example, notice the increased inflammation parameters as part of regular health checks. Therefore, overweight people should regularly go to the health check-ups paid for by the health insurance companies.

Adipose tissue is a specialized connective tissue that consists mainly of fat cells (adipocytes), but also of fibroblasts, vascular muscle and endothelial cells as well as isolated immune cells. A man of normal weight has about 12-20 percent fat tissue, a woman 20-30 percent. It was only through the development of adipose tissue and the storage of energy in fat cells, the adipocytes, that it became possible to survive longer periods of hunger. In addition to this task, for a long time only aesthetic value was attached to fatty tissue. With the discovery of the satiety hormone leptin in 1994, however, it became clear that the fat cells can, among other things, contribute to the regulation of food intake through the production of proteins. A number of other factors that are produced in adipose tissue have now been identified. These include a large number of immunomodulatory signaling molecules such as cytokines and chemokines, which have a decisive influence on the activation of immune cells (see figure above). For example, they are also responsible for attracting immune cells such as macrophages or T cells to the location of an inflammatory process, activating them there, or controlling the inflammation by slowing down an immune reaction.

As mentioned before, there are isolated immune cells in the adipose tissue of people of normal weight. It is now also known that there is a strong connection between body fat mass and the number of these immune cells in adipose tissue. These immigrated cells can be in different activation states. While some exist in a dormant form, others can produce large amounts of other inflammatory factors in response to previously unknown stimuli and initiate or maintain an inflammatory state. The way in which the immune cells are attracted to the adipose tissue is currently the subject of intensive research.

As described, adipose tissue consists of different cell populations. Fat cells can be thought of as a primitive immune cell because they have a number of similar properties. Under culture conditions, for example, fat cells can take in bacteria, just as the immune system's phagocytes do. The size of a fat cell has a decisive influence on their ability to produce immunomodulatory factors and release them into the circulation. For example, enlarged fat cells have a higher capacity to produce pro-inflammatory factors, while they produce comparatively fewer anti-inflammatory factors.

Fat cells seem to set an inflammatory reaction in motion by releasing inflammatory substances by activating immune cells via the blood and / or the lymph. For what reason they do it is still unclear. An attractive hypothesis is that enlarged fat cells are more stressed than small ones. In order for the fatty tissue to regenerate, it needs smaller, insulin-sensitive cells. To initiate this process, the large cells die, that is, they go into necrosis. In doing so, they release secretion products and thus indicate their own downfall. Through this production of inflammatory signaling molecules, immune cells are attracted into the adipose tissue in order to clear away the submerged cells. However, the attractants and messenger substances may also lead directly or indirectly to insulin resistance as a side effect.

Various studies have shown positive effects of individual food ingredients, for example fiber and omega-3 fatty acids, on various inflammatory parameters. However, in the long term, only weight reduction is able to reduce the inflammatory complications and thus the secondary diseases of obesity. Numerous studies show that even a moderate reduction in body weight by five to ten percent leads to a significant improvement in metabolic disorders. As an exception, the principle seems to apply that the more, the better. A diet that is slightly below the energy requirement, in combination with an exercise program, is also able to reduce the size of the fat cells. This may explain the effect that weight loss delays the progression of diabetes. At least the fat cell size could be identified as an independent risk factor for the development of type 2 diabetes. A weight reduction in combination with a moderate increase in everyday activity is also able to normalize a diabetic metabolism.

In order to avoid the development of diabetes and other health complications, obesity should be avoided as much as possible. Men in particular should make sure that a small abdominal attachment does not turn into a risky, metabolically active cushion.