Should I buy a Final Fantasy XV?

Final Fantasy 15 in the test - a new beginning 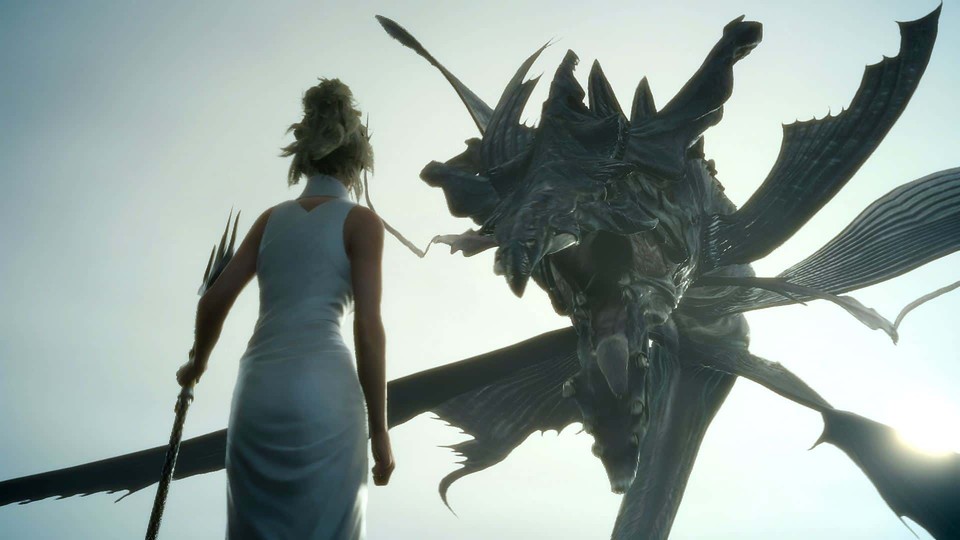 What a difficult birth! For more than ten years, Final Fantasy 15 hung on the navel of its developers, who tinkered with their unborn baby like possessed. The last decade was marked by name changes, developer changes and new concepts - the previously planned spin-off for Final Fantasy 13 became an independent game with its own universe, its own background story and its own characters.

Such a moving and bumpy development phase leaves its mark: You can tell in Final Fantasy 15 in every pixel how much work has gone into it. It's spectacular, beautiful and one of the most ambitious role-playing games in recent years - but in some ways even too ambitious.

Prince of a Fallen Kingdom

Final Fantasy 15 throws you straight into the cold water of adventure without further ado and big explanations: The hero Prince Noctis Lucis Caelum leaves the royal city of Lucis with his best friends Prompto, Ignis and Gladiolus to be married to the oracle Lunafreya. The wedding has political reasons, it is actually supposed to smooth the balance between the kingdom and the Niflheim empire. But the peace agreement fails: As soon as Noctis has left his homeland, enemy troops infiltrate the throne room, lay Lucis in ruins and kill King Regis - Noctis' father.

On the move together: Prince Noctis and his buddies Prompto, Ignis and Gladio.

The young prince does what everyone would probably do, at least in role-playing games: he swears revenge, Niflheim must fall. Most players, however, should hardly care at first, because the open game world lures with dozens of side quests, sights, hidden treasures, mini-games and loads of monsters - plenty of opportunities and reasons to distract from the story.

Something that a traditionally story-heavy Final Fantasy can't really afford. The developers' solution, however, seems rather inelegant: At a certain point, Noctis and his crew leave the starting region behind, from then on the adventure follows a strictly linear path and is fully dedicated to the characters and the plot. Final Fantasy 15 deliberately chooses the opposite path to the previous series parts, which always began linearly and then gradually opened up their world, at least partially. Not every fan will like this.

Differences PS4 / Pro
Final Fantasy 15 runs largely smoothly on the standard PS4, only occasionally there are slight drops in the frame rate. There are also popups in the open world. Neither problem is serious, however.

On the PS4 Pro you have the choice between two graphics options: "Visual" and "Performance". With the latter setting, FF15 looks the same as on the PS4, but runs more smoothly. With »Visual«, vegetation, shadow effects and anti-aliasing are increased, which results in significantly smoother object edges and a sharper image. But then you have to accept smaller frame drops every now and then. It is possible that a future patch will further improve performance on the PS4 Pro. 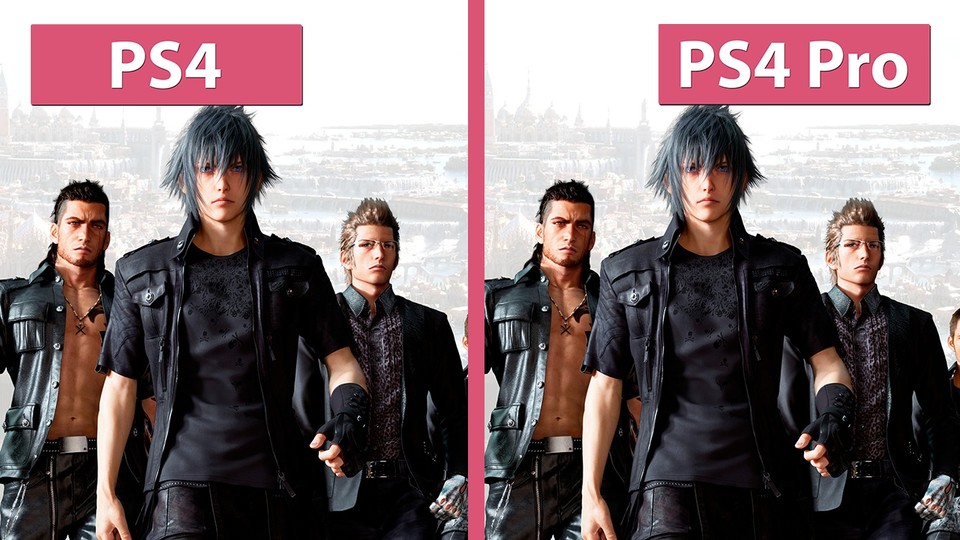 A feast for boy scouts

Thanks to the impressive open world, the first hours are among the most fascinating in series history: Eos is beautifully and variedly designed. Gigantic dinosaur creatures trudge through a lake, chocobos hop excitedly through the forest and a huge meteor crater extends in the center. In addition, you will always discover special items and weapons in remote corners - Exploring is rewarded.

After a few hours your quest log will overflow - there are plenty of side tasks.

If you don't keep your eyes open, you might march on the partly well-hidden and completely optional Dungeons past. Due to the tube-like structure and the very barren surroundings, they are sometimes shockingly ugly in design, but always reward you at the end with a small boss fight and one of a total of 13 summoner weapons, which cause devastating damage, but also nibble off life energy in the fight. In the dungeons and crypts you will also be confronted with smaller switch puzzles and skills, but you shouldn't expect real headbuttons.

In general, it is up to you where you travel next. The freedom is overwhelming. In order to uncover part of the map and thus important points such as dealers, towns or treasures, it is sufficient to chat with the employee in a nearby restaurant or café. And even if the game world is neither too big nor too small, it is extreme troublesome to move around on foot. Chocobos and the Regalia royal vehicle provide a remedy. However, the box only follows streets and small dirt roads, you cannot rush around completely freely. Therefore, the journey from A to B is sometimes a bit cumbersome, especially since you have to refuel the Regalia every now and then - an annoying and superfluous play element.

With Chocobos you can move freely and progress much faster.

Tons of tasks and side quests

Hunters and gatherers also get their money's worth with the numerous side missions, which sometimes lead you to great sights, but sometimes also involve you in a tough boss fight. For example, the first contact with you will not be forgotten Behemoththat you must pursue to its nest and finally knock it down there. Elsewhere, you infiltrate a Niflheim base full of 'Mechs, kill a fat titan on a bridge and flee through a lava-spewing volcano.

In addition to many memorable experiences, Final Fantasy 15 also offers some generic errands and stupid killing missions. Collecting gems, taking photos and checking electricity pylons are among the less creative pursuits. However, the typical spiral of addiction of levels and the search for new equipment makes up for everything. Adventurers can easily plan 50 hours for all side and main missions.