How do I determine a phoneme 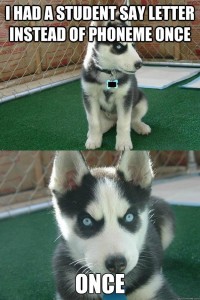 A student once said to me a letter instead of a phoneme. Once.

HM Yes. It only happened to me in the seminar last week, and I was a little helpless - in the sixth semester and after numerous compulsory courses in linguistics, you should actually know better.

But what is it about?

We are extremely obsessed with writing, which often leads to linguistic laypeople not distinguishing between what is written and what is not.

For example, I have already heard from students that they used to write

According to my subjective impression, the mix-up mentioned in the picture is even more common: Here letters and sounds are equated. You can tell that it can't work like that when you look at individual examples:

First of all, in linguistics one does not speak of letters, but of Graphemes. There is an excellent reason for this: Often it is not individual letters that represent a sound, but combinations of them. So

Now I have just said that graphemes represent sounds (better: phonemes). This is called, depending on the direction, Grapheme-phoneme correspondence or the other way around. In German, however, this correspondence is often not particularly straightforward. So there is often several Graphemes that one Phoneme correspond to: / s / can be written as:

My students had now looked at a few pages from Asterix in Mainz and discovered examples like the following:

This was described as "In the Mainz dialect

In addition, not all High German